March 09, 2018
This is part two of my review of Noah Hawley's Fargo miniseries (2014-present). Part one discussed how the show's ineffective tricks bothered me. For part two, I wanted to examine the show closer—and talk about Quentin Tarantino's Pulp Fiction (1995), a movie made by a director who pulls off similar tricks, albeit with aplomb.

Hawley strives for meaningful chaos, in Fargo. Yet, for all the tricks he pulls, it adds up to peanuts. Such modernism works a lot better in Tarantino's Pulp Fiction. Yes, there are odd things in that movie—mishaps that transpire out of the blue, in sudden, volcanic tangents. Nothing appears to add up ("appears" being the key word, here); in all actuality it does, existing as a wholly engaging work. There aren't any heroes, in the black-and-white sense, and talk of God is limited—mercifully punctuated with random violence that, in and of itself, serves as a brain-splattering punchline to a joke no one saw coming (see: Travolta, below). 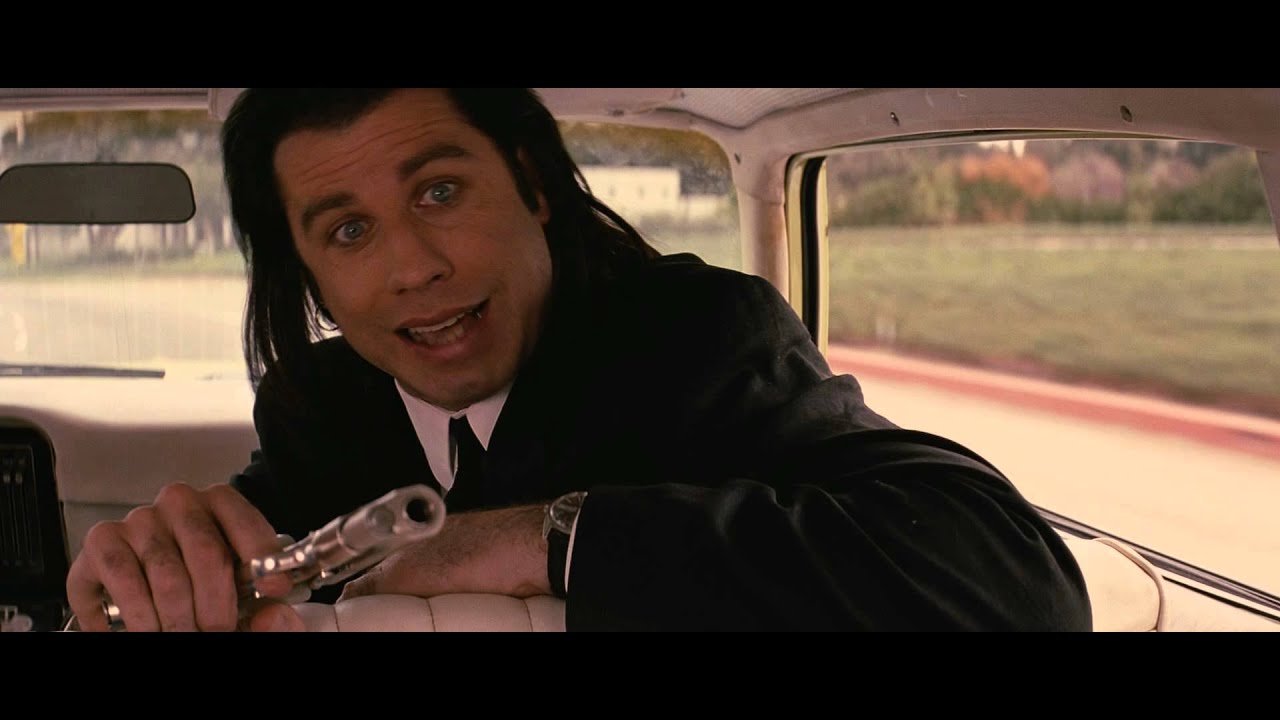 What's important, here, is that the joke works; it delivers. Any food for thought should be a part of something that can function perfectly without it. Such is not the case with Hawley's Fargo. There is a great deal of humor, but the jokes themselves are isolated rather than being part of the overall experience. It's pepper on the steak, versus being the steak, itself.

From the outset, Hawley's Fargo hinges on nonsense. It chooses to embrace the absurd, with little thought given to the consequences. Furthermore, its choice in characters are simply odd, even annoying: The Pathetic character in season two is a loony feminist. Erstwhile, the hero is a man—one who, at the end of the season, describes the act of caring for women by men as similar to the pushing of a rock up a hill ("It's a privilege," he adds). Whatever the writers' reasons, the preaching comes off as quaint, bizarre and revisionist. The strange worldview is expanded on by Billy Bob Thorton's animalistic Lorne Malvo, in season one; or David Thewlis' lupine Varga, in season three. It's effectively a chorus of madmen and simple-minded country bumpkins.

The overall effect is anachronistic—more of a folktale picture, with good and evil characters that fail to belong anywhere outside of it. Unlike Tarantino, Hawley's self-enclosed tale fails to entertain. Its villains stick out of their pastoral, prey-laden habitats like sore thumbs. Hawley's villains are psychopaths who quote novels, poets, and thinkers; his heroes parrot these quotes—usually with frowns on their faces, choosing to embrace God (or UFOs), instead. The takeaway appears to be that unity or faith matters when one is surrounded by the chaos of real life. The problem is that Hawley's insanity is both too insane and too straight-faced to hope to emulate anything but itself. And frankly I would've have given a toss had it, like Pulp Fiction, been consistently fun from start to finish. Instead, Hawley appears to have overvalued his transparent aporia, showcasing it incessantly as though doing so somehow makes the desultory material clever. It doesn't.

The whole ride is sporadically giddy at best. Yes, individual factors work well, but as a whole, the show comes off as terminally disjointed. There are some memorable violent scenes, but they never quite add up. Likewise, traces of pitch-black humor are laced throughout, but are spoiled by the show's tendency to wax black-and-white morals, where evil men are wolves, and good men shepherds. I didn't much enjoy that sort of didactic jawing in Pulp Fiction, either, but at least there it felt cohesive and reined in. Tarantino made Pulp Fiction nonlinear. It seemed random, but is actually quite structured, building up and moving towards a substantial, entertaining conclusion. There's a larger-than life sensation that somehow still works. With Hawley's Fargo, I felt like they were going for the same effect, but the result is mostly a wash; it flies off the handle, nuking the fridge into total oblivion.

Another issue I had is that, for all the gunplay Hawley advertises, the actual visual effects are cheap insofar as how they're filmed. In other words, whenever a discharged firearm was filmed, it's painfully obvious the visual effects were usually added in post. The owners don't jerk from recoil, after pulling the trigger, nor is there real smoke, or other little details. Half the time, the persons being shot are pulled about on wires, with digital blood shown for a brief instant to indicate a successful kill. I wouldn't have much cared, except the violence is as much the focus of the show as anything else. And for all the attention to detail, Hawley screws up the action, itself, when everything up to that point has been steadily building up to it.

For example, the final episode of season two was a brutal massacre—or rather, it was supposed to be. Cops and robbers trade fire for what feels like ages. There are lots of shotguns, rifles and pistols, but the action feels weak. There's little substance, because much of it looks fake in a way that isn't, I would argue, intentional. Hawley and company ascribe to gritty realism or cinematic artistry until they jump the rails, at which point they rely on cheap gags to try and distract from the lack of either: wires, postproduction effects, editing tricks, UFOs. Then, they try and dovetail it with the overarching narrative that life is absurd and we should just accept everything onscreen at face value (one character asks another about the UFOs, afterward, to which the hero simply shrugs). The problem is, everything falls apart the moment you refuse to—easy to do given how obvious and plain their tricks are.

Because Hawley's writing choices are nonsensical, nothing in Fargo makes sense. You could call that cultivated; I think it's thrown together, incompetent whereas the Coen brothers accomplished a feeling of enjoyable, cohesive entropy without bookending their material with UFOs. They photographed everything expertly. There was a level of craft. Then again, they wrote the book; Hawley merely tries to color it in.
***
About me: My name is Nick van der Waard and I'm a Gothic ludologist. I primarily write reviews, Gothic analyses, and interviews. Because my main body of work is relatively vast, I've compiled it into a single compendium where I not only list my favorite works, I also summarize them. Check it out, here!
I'm an artist and a writer. If you're interested my work and are curious about illustrated or written commissions, please refer to my website for more information. If you want to contact me about a guest article, please use this contact form or reach out to me on Discord (vanderWaardart#5394)!