March 09, 2018
I've finally seen Noah Hawley's Fargo miniseries (2014-present)—all thirty episodes' worth. I won't be reviewing them individually. Instead, I'm going to focus on the series, as a whole. I'll discuss how the show's tricks bothered me, in part one; in part two, I'll discuss someone who can actually pull off these tricks with aplomb: Quentin Tarantino, and his movie, Pulp Fiction (1995).

Fargo is all promise, little pay-off. To be fair, the original movie (1996) wasn't my favorite, but still works much better than Hawley's work—a shame, considering how much time Hawley and his crew have spent, faithfully shading in the patented Coen brothers' coloring book. The problem here isn't the book, itself, but the inconsistent, sporadic coloring job. At times, it supersedes any expectation to shade inside the lines. Largely uncommitted, though, their spotty efforts yield equally checkered results—crazy in spots but not enough to accomplish what Hawley had in mind, setting out. One notable example is episode one of season two. It's generally great, in the sense that it successfully emulates what made the 1996 movie so good, to begin with. It also presents glaring symptoms of acute organ shutdown, right off the bat: the UFO. Generally the deus ex machina functions as a last resort, to be used when one has written themselves into a corner. However, the show confusingly opts to lead off with this approach. Then, when things don't make sense, as a result, they try to roll with it, maintaining the blatantly transparent fantasy as though it were an acceptable way to structure the narrative. While the violence and hilarious idiocy in the original Coen brothers movie was absurd, it still felt grounded. With Hawley's show, it never really does.

In an interview, Hawley described the UFO from season two as the show's Mike Yanagita because, it's random; it just happens, and there's no explanation. However, there's a huge difference between man and Martian: the former is plausible and serves a purpose. In Fargo (1996) Yanagita's lying to the protagonist's face serves as a wake-up call of sorts, in that it teaches her not to take things at face value. On the other hand, the  UFOs serve only to populate the show with random nonsense. The issue isn't theoretical possibility, but plausibility.

So while the aliens can be imagined, they remain as realistic as faeries or Santa Claus. However, they can't be metaphors either because the show treats them as real-world objects. So while Fargo labors to be down-to-earth, it's actually pure fantasy. At the same time, it takes the opening paradox "This is a true story" a bit too literally—one the Coen brothers spent less than a minute mentioning in their own movie. To call Hawley's Fargo magical realism would be unwarranted, however, given that its transparent, jarring tonal shifts succeed only in killing whatever paltry sense of momentum the show barely ekes out. Had it decided to be consistent, like the movie was, it would have worked much better. 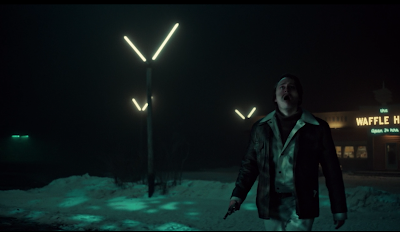 Again, take the opening of episode one, season two: After the wonderfully practical shoot-out at the dinner, the perpetrator (a very intentional Steve Buscemi lookalike) stumbles out into the road, only to be hit by a car. By itself, it's fine; this kind of unexpected twist is common, in movies and shows. The problem with how the show goes about it, effectively dropping a cartoon piano on his head by having him see a cheap-looking UFO in the sky before the car plows into him. Immediately it was Hawley jumping the shark—rather premature for him to resort to such nonsense only two seasons in (versus Happy Days' [1974] five)! Furthermore, the effects were so bad, they may as well have been using a paper plate hanging from a string. Yet, Hawley expect us to roll with it, even though the Coen brothers would never have done something so blatantly cheap and obvious. If they did, it would have been tongue-in-cheek, whereas with Hawley treats it seriously.

Such radical deviation from the source material contributes nothing. It also begs the question, why have the UFO at all? The perp could've been struck by a motorist due to poor visibility conditions, and it would have made a lot more sense; instead, everything following the sighting becomes fruit from the poison tree—an effect not alleviated by the fact that the entire narrative is bookended by the UFOs returning during the shootout, towards the end of the season. From on high, they force their way into the narrative, and everyone onscreen stares at them in utter disbelief—not because of their presence is awesome, but that it makes no sense. The UFOs make everything around them feel botched and uneven, like a world class theater having suddenly and rapidly degraded into bad finger puppetry. They also distract from certain holes in the writing. For instance, Peggy throws acid in Hanzee's face. But where did she get it? I didn't wonder at the time because I was effectively distracted by the bigger white elephant in the sky. I'd say "well-played, Hawley" except the trick doesn't hold up, in retrospect. 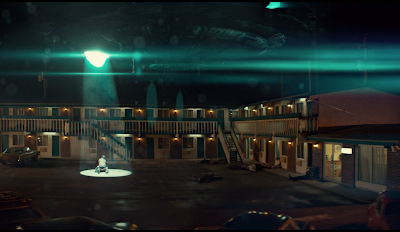 I wouldn't have minded as much, had some actual work gone into the UFOs, but they're a rushed job, themselves. No attempt is made to generate suspense, nor conceal what frankly are some awful visual effects (as well as abusing the lens flare and less-than-optimal color choices). They're just thrown in, with the writers evidently expecting us to take it "as is" because "life doesn't always make sense." It comes off as rather duplicitous given how spotty the script is. Depicting life as an idiot's tale generally requires a certain amount of care or moderation. Hawley's UFOs are the opposite of this—lumbering sleights-of-hand that reinforce nothing as they disintegrate everything the show's makers have carefully labored to reverse engineer.

In other words, each episode is a house of cards built with a full deck; there's plenty of material but it doesn't hold up. Meantime, whatever new contributions made by Hawley deviate from the source material without building on it. Plenty happens; little results from it. Each season is standalone, with most of the players dying at the end of each. Meanwhile, there are evil villains and good heroes aplenty. The former are malevolent characters; the latter simple and God-fearing. There's an essentialist quality in both that's frankly about as fun as watching paint dry (and as "true" as the Bible). Yet, to call Hawley's chaos anything other than what it is (utter nonsense) is criminally dishonest, given how spectacularly it fails to be anything else. It's so awkwardly slapped together, anyone should be able to call "nonsense." Doing so doesn't inject method into Hawley's madness; he's not Hamlet, but King Lear.

I should add, there are examples of this kind of style that, I feel, work better than Fargo managed to. In 1995, Quentin Tarantino demonstrated with Pulp Fiction that an absurd, modernist approach can actually work well. I'll discuss how, and talk about Fargo in further detail, in part two.