March 20, 2018
Here is part two of my review for Firepower (2018), Judas Priest's latest album. Part one examined the album more generally and retrospectively. Part two shall examine it, track by track.

"Firepower" is probably pound-for-pound, the strongest track on the album. That being said, the riff, right off the bat, sounds very similar to "Dragonaut" (2014). "Firepower" is, on its own, short and sweet, though—barely over three minutes, with a trademark opening shriek by Halford, run through a phaser. There's also steady double-bass from Travis during the chorus, a lovely bridge with a standard-issue circle-of-fourths arpeggiated progression ("Dragonaut" saved it for the solo, and was played by Tipton, on that album). Not to mention, there's lots of small hooks and changes, including a harmonized riff towards the end sounding as though it was pulled directly from "Between the Hammer and the Anvil" (1990). Yeah, "Firepower" is basically a reworked, less-anemic version of the opener from their last album, but what's not to love? It crackles.

"Lightning to Strike" maintains the momentum, with a jaunty triple meter and equally-brief track length. It also sounds like it's a reworked version of the same track number from their last album: "Redeemer of Souls" (2014). However, Sabbath did it, with "Turn up the Night" and "Voodoo" on The Mob Rules (1981) replicating "Neon Knights" and "Children of the Sea" from Heaven and Hell (1980); so I won't judge Priest too harshly given how strong the music is. As far as the song goes, Halford's shriek fades in and out, swooping like an eagle. There's some good interplay between him and the twin axemen before the harmonized guitar chorus and bouncy solos kick in. It's quick and snappy and the rhythm section pounds throughout.

"Evil Never Dies" is excellent. It's probably the one song on the album that sounded the least like Priest, instead sounding more like King Diamond. All the same, the opening reminds me a little of "Wheels of Fire" (2003), with a rumbling bass line from Hill, and a massive riff as thick and fat as Tony Iommi sounded, on Heaven and Hell's "Double the Pain" (2009). The chorus is two-headed: happy on one end, and wickedly menacing on the other. It's not quite "Abigail" (1987) or "Tea" (1988) but certainly a step in that direction. The closest comparison I could make is probably to Mercyful Fate's In the Shadows (1992).

"Never the Heroes" isn't a bad song—for what it is. It just sounds like it belongs on a different album. It starts slow and simple, with a slow chug from Hill and a lengthy tom-tom rattle from Scott, segueing into a naked acoustic melody and subdued Halford, crooning for affect, and dazzling the listener with overdubbed vocals for the catchphrase "we have our honor to defend." I know Halford isn't exempt from using them, but I seldom remember him sounding quite so polished, relying more on the sheer power of his voice. This song uses less to achieve more, and it works. Regardless, I'd have cut it from the set without a second thought.

"Necromancer" introduces some spooky harmonized wails and morbid lyrics that, once again, evoke King Diamond (or Marilyn Manson). The rhythm is a little on the chunky side and reminds me of a faster version of "Decapitate" off the Ripper Owens-fronted album, Jugulator (1997). Despite the morbid subject matter, I'm not the biggest fan of the chorus, here, and the song structure feels a little basic. That being said, the eight bars leading up to the solo (and during it) evoke Priest at their most metal, with some nice, frantic solos traded back and forth from the lead guitars. The lyrics are generally fun, too.

"Children of the Sun" is slower, leaning towards Black Sabbath-style doom without actually turning into sludge. The acoustic interlude is a sigh of relief to an otherwise dark, murky affair, accented by a metallic shimmer from Travis's kit (much the same way Les Binks did, for the opening to "Beyond the Realms of Death"). Faulkner's solo absolutely cooks; Tipton's is more refrained. Following that, everything slows to a halt as Halford describes the world coming to an end, very much as Ozzy did, during "Electric Funeral" (1970): step-by-step. The change of pace is elastic, and things speed up, right at the end, with another tiny solo to close things out.

"Rising from Ruins" marches steadily from start to finish, with the tempo the same throughout and a tendency to lean on its chorus, like "Blood Red Skies" (1988). The chorus didn't grab me, and the verses rhyme slowly and awkwardly. The bridge section erupts early on, only to be dotted by some stilted, on-the-beat, Ozzy-style phrasing by Halford. Then the trademark solos spring forth. Faulkner's dazzles, with some frantic, chunky notes, offset by brilliant harmonized leads. Tipton follows suit, and then things modulate and modulate, rising suitably as the title requires. A lot of people seem to like this one; for me, I would have killed for a noticeable tempo or meter change.

"Flamethrower" benefits tremendously from the rhythm section, especially Hill's bass. It also has a two-part chorus. Think "Evil Never Dies" except not quite as menacing. It's more chug and less thrash; Faulkner blisters briefly but Tipton twangs minimally. There's a little singer/guitar interplay at the end between Halford and Tipton, akin to "Cemetery Gates" (1990). At this point, I feel like the album would have benefitted from another quick track, like "Firepower," instead of another mid-paced number (especially after "Rising from Ruins").

"Spectre" is another personal favorite. The stumbling riff and grim lyrics evoke one of Priest's earliest songs, "The Ripper" (1976). The staccato bridge is straight from that song. The evil laughter isn't, but feels at home anyways. This is the variety I wanted from "Necromancer" but got here, instead; plenty of squealing guitars and vocal harmonies haunt the listener. There's a swaying melody line that repeats before the tilting solo, by Faulkner, coasting along some more King Diamond-style harmonies and a palm-muted reply from Tipton, complete with ominous string-bending trills. Everything is pure, unadulterated fun, here. 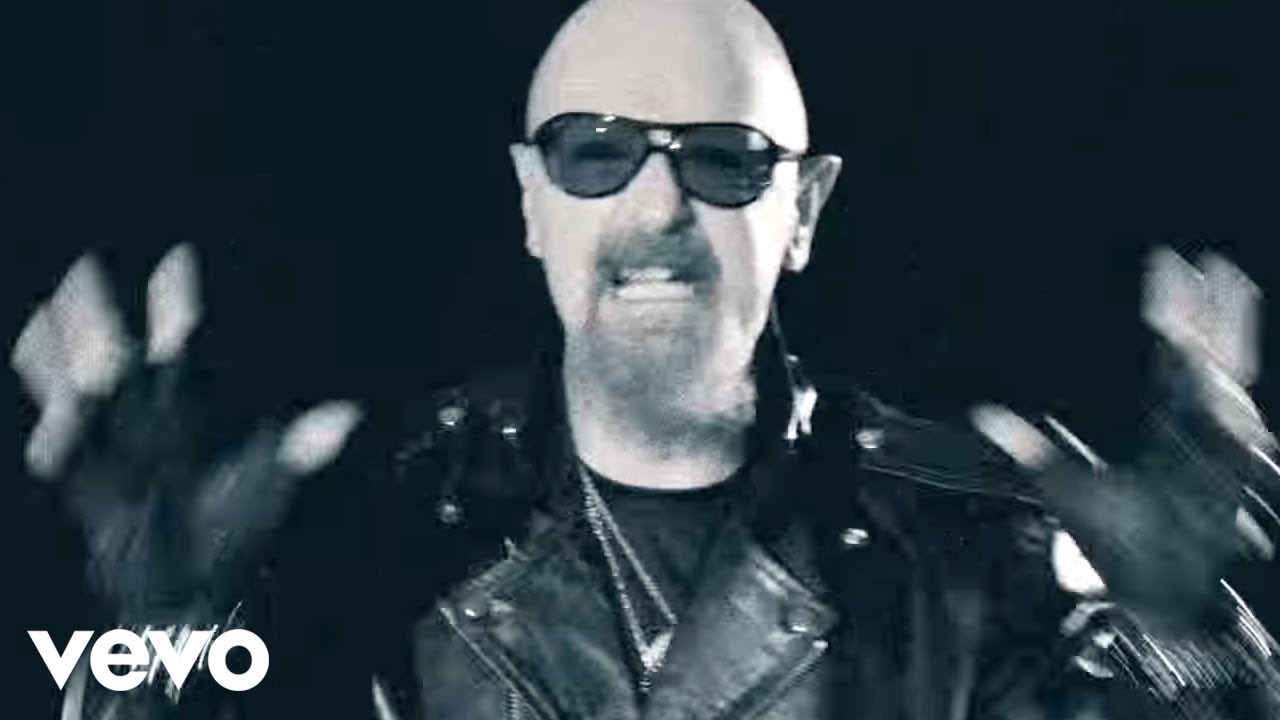 "Traitor's Gate" echoes "Rising from Ruins" and marks the second time where I started glancing at my watch. The opening is utterly forgettable. When the guitars cut in, I felt strongly reminded of "Battle Cry" (2014). Like "Rising from Ruins," the rhythm never really changes from beginning to end, which makes the song seem longer than it actually is. It's not all bad news, though: The bridge is effective, and Halford dominates the tone, bending our ear with an affected plea. The bells tolls throughout an extended solo by Faulkner, followed by an a "battle anthem-style," voiceless chorus, strongly reminiscent of Painkiller's "Battle Hymn." One of the album's weaker tracks.

"No Surrender" is possibly the shortest track on the album. Here, the rhythm is heavy and immediate, crunchy and in-your-face. The verse grabs you, and the acoustic section is interspersed with some varied solo work that's both wild and restrained. It's the album's true anthem: short, terse, and full of attitude; a little gem tucked away in the backend.

"Lone Wolf" is probably my least favorite track, apart from "Traitor's Gate," "Rising from Ruins," and "Never the Heroes." By this point, it's the slowest song in an album that has more than its fair share of mid-paced rockers. The song is basically pure Groove Metal, the first section enclosed by a swaggering acoustic bumper. The bridge extends into a protracted, bluesy solo by Faulkner coupled with a trademark harmonized Judas Priest guitar chant. Coda, verse, end. Next.

"Sea of Red" reminded me of the "slow, slower, and slowest" approach, on Defenders of the Faith (1984): "Some Heads Are Gonna Roll," "Night Comes Down," and "Heavy Duty." In any case, "Red" just marches ahead, starting slowly and gradually picking up steam until it crushes everything around it. It's not quite as thunderous as "Sign of the Southern Cross" (1981). Still, it works better than most of the slow songs on the album in that it actually takes its time builds up to something. Things start very small; then, by the time the solos make themselves heard, we're ensconced by a massive, oceanic chant. Compared to "Firepower," this song is glacially slow—a fire-versus-ice bookend not unlike Slayer's "War Ensemble" and "Seasons in the Abyss" (1990). Things end in a shrill rising of Halford's vocals, climbing steady until the final bark of the guitars thunder and everything fades out, as one. I love it.