November 29, 2018
Technically, Narcos: Mexico (2018) is a spin-off of Narcos (2015). However, given their close ties, I like to consider it the fourth season of that show. The first two focused on Agent Murphy from the DEA, and his fight to take down Pablo Escobar. Season 3 focused on Pablo's successors, as combated by Agent Peña, Murphy's partner. Season 4 occurs before either the DEA or cartels were fully established; it tells the story of two opponents: the Thin Man, Félix Gallardo, and his rise from lowly hill bandit to the most powerful drug trafficker in Mexico; and Kiki Camarena. Kiki is a name that's appeared before in the show, though only in passing. Turns out, his contribution to the war-on-drugs is substantial. 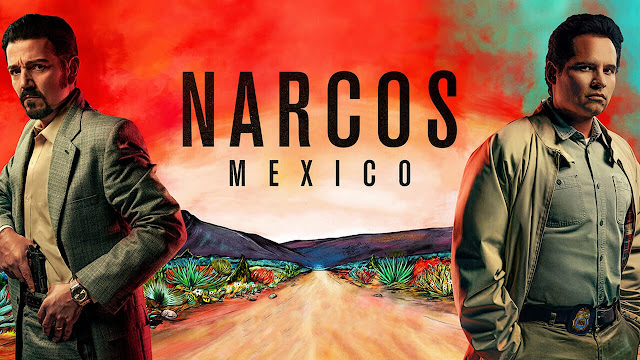 Season 4 is my favorite, and I enjoyed the other three. It gets a lot right, even if it disclaims how various liberties are taken for dramatic effect. Such drama is not limited to dialogue; many additions up the ante, in terms of action. Consider the aquifer scene: Trading his pickax for a box of grenades, a fed-up drug dealer drops bomb after bomb into a partly-dug well. When that fails, he throws in the crate. It might go without saying that the ensuing fireworks are spectacular. Except it's not unusual to get this kind of thing wrong. The explosion could have been digital instead of practical; too big or too small; the lighting off, the placement of the camera incorrect. Though such scenes undoubtedly aim to satisfy our expectations, they often fall short. Not this time. The effects are spot on, thundering and tremendous—a precedent the shows maintains for much of its run time. While the grenadier scene is intentionally gratuitous, its execution, though roughly hewn, remains professional. A confident lens captures the stellar crudeness without gloss or sleekness. Furthermore, much of the visual bombast feels appropriate to the gangster lifestyle. The audience looks inside this world to feel entertained; a gangster uses violence to communicate.

The show's mayhem could easily be described as superfluous ("face, meet propeller") if not for the fact that there's so little, per episode. The kills are crude when they happen, the make-up and prosthetics convincing. One scene—not unlike the ending to Casino—is a home invasion that unfolds in slow-motion, wherein a gangster gets their just deserts. On a sea-carved pediment, he sits with his back to the carnage. He cannot see the army soldiers crawling over his beachfront escape. Nor can he hear them; a pair of vintage headphones stifle the din. Next to him, a bikini-clad woman lounges on a towel. She is equally aloof... until a bullet strikes her midsection, bursting it like a pumpkin. She stares incredulously at the gaping wound, only to have another round strike her face, seconds later. The ensuing blow-back coats the gangster's face. He can barely feel it; he is high as a kite.

Moments like these are a gore-hound's treat, yet here is a show that is more concerned with backroom deals and potential violence. The body count rises to a grander crescendo using smaller climatic episodes. There are occasional missteps. An obligatory extended shoot-out at a cartel grow fails to captivate on various levels. One, it's simply not the focus; they haven't the time to go all-out, nor the financial investment. From a dramatic-narrative standpoint, there's no sense of danger. Army soldiers die in droves; the main players survive seemingly by luck. Worse, minimal cuts extend the scene. One is forced to sit through insignificant death after insignificant death. I'm not against pitched gun battles, but this one is nowhere near as impressive, riveting or elaborate as Saving Private Ryan, The Wild Bunch, or Hard Boiled. It should've been pivotal, but felt like a throwaway exchange.

While not exactly a novel of manners, the cast is wide and varied. The better part of two episodes are needed to introduce the main players. It almost feels routine. Then things pick up. Such preparation is required; there's a lot going on, here, in terms of the characters themselves. Actors constantly enter and exit. On the sidelines, disgruntled members chew the scenery with contempt. The steady shuffle keeps things busy without descending into pure chaos. Felix boasts a wide array of questionable "allies," though especially Don Neto. Neto provides many of the show's funniest moments. He's also the voice of reason, the one to see potential in Felix, and disappointment when the future cartel leader belies Neto's trust in him. Characters like Neto suffer in Felix' wake. Criminal, they remain sympathetic. 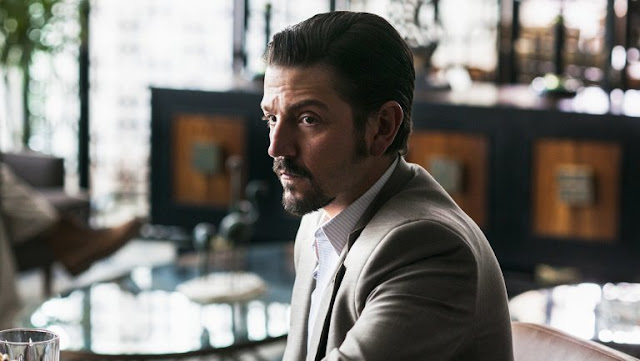 Felix' evolution is a slow-boil, and the widest arc the show employs. I enjoyed watching the meek bandit gradually evolve into a much darker creature. A nasty possibility remains: that Felix was very much like that from the start. It's hard to tell, given his opaque persona, his villainy largely by proxy and gleaned in retrospect. He's not a blameless, celibate man, but generally presents himself as one. When a sudden reveal to the contrary presents itself to us, it's all the more shocking and abrupt. For example, we learn through his wife that Felix is unfaithful. Yet, as an audience we've yet to see a single affair. They're always off-screen, out of sight, implied. We see more than the wife does, but are none-the-wiser. The same goes for bloodshed. Felix' first kill is awkward, but expected. We see it coming and allow it. Eventually the carnage takes on a ruthless opportunism. He beats a subordinate to death—a sneering weasel of a man who once had the edge on him. What comes around, goes around, implying a cycle that never ends. We can relate to Felix the family man, despite his larger-than-life persona. He shoulders a desperate ambition to escape his own past—of working under the governor, someone more powerful than himself. Initially solicitous, the governor is actually smug and cruel, rebuking Felix for his "moderate" success. How satisfying it is, then, to see him struck dumb by Felix' ultimate act of vengeance.

The show has a way of making certain persons feel invincible or incapable. Suddenly they're not, but it never feels cheap. In a world of violence and betrayal, Felix simply has a deeper capacity for treachery than most—one he holds close to his chest. This detachment is announced with glacial slowness. We're meant to doubt him, that we might disadvantage ourselves, later. When that happens, we find ourselves relating to his foes-turned-colleagues—men and women who provided assistance from a superior position, only to slip into disadvantage, themselves. Felix is deceptively efficient, able to use the smallest opportunity against his enemies. They intend to spite him; he turns it back on them, savagely apotropaic. Not all his victims are foes. A close female friend gradually becomes a jaded business partner—one he crosses more and more boldly as time goes on. At first, he seems ashamed; by the end, he bullies her with impunity. Friend or foe, everyone underestimates Felix, and he lets them. There's no give in him, in parlay or in combat. Vae victis.

Shrewd as he is, Felix endures numerous obstacles—a predicament highlighted by the old Narcos cast. For me, Seasons 1-3 felt abbreviated, rushed; here, there's opportunity to return to older times for closer inspection—a different perspective on the same characters, places and events. There's a certain curiosity to scenes involving men whose fates we already know. The same cannot be said for Felix. These "ghosts" introduce an element of tension because we know what they're capable of. The moment Pablo steps out of the shadows, Felix is in trouble. Fortunately(?) Pablo operates by simple rules: lead or silver. Make the right choice, and you'll walk out alive. Felix operates by such logic, powerful as he is; from beginning to end, his actions play out accordingly. 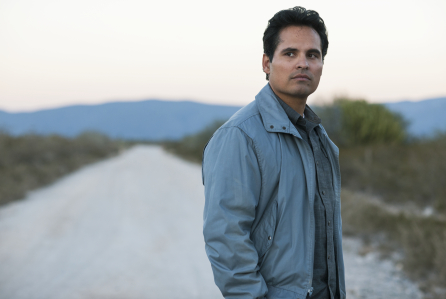 Felix' truest foil is Kiki, a man almost beneath him. Similar to Richie Roberts, in American Gangster (2007), Kiki hunts Felix from a distance. Even that is dangerous. For veterans of the show, Kiki's fate is common knowledge. If you're watching for the first time, the narrator precludes any sense of optimism by stating, "this story doesn't have a happy ending." One early episode features Kiki having been kidnapped, already. The moment the omen is realized, there's no room for surprise. However, the tragedy remains apt because Michael Peña portrays Kiki so well. Similar to End of Watch, he engenders admiration, not pity in his unavoidable misfortune. Versus the cryptic and guarded Felix, Kiki is determined and stubborn. His impressive accomplishments are offset by his status as forsaken, and we legitimately feel for Kiki when his time is up. From start to finish, he fights an uphill battle. The ending is suitably bleak, and I appreciated the allusion to Charlotte's Web (1952): "No one was with her when she died."

The biggest accomplishment, here, is a sense of self-contained tragedy the earlier seasons failed to capture. Agents Murphy and Peña are busy but never threatened. Constant setbacks lose them nothing but time or allies. Murphy is separated from his wife; Peña is a loner that eventually reunites with his family. It takes longer for less to happen, and nothing they can't recooperate. Season 4 is different. We're with Kiki every step of the way. Nothing feels rushed. Somehow, the show makes ample room for side characters: Kiki's wife, and friends; Felix' wife, Maria; his brother, Rafa; and compatriot, Neto. The earlier seasons spent more time with history and waxing philosophy regarding magical realism. Here, the cartel are the focus, not the money they make. Felix starts with weed, and works up to cocaine. Less exposition allows for a more nuanced drama. The climb, to proper levels of catastrophe, is better than ever. It all feels cohesive and eventful; the arcs rise steadily to a satisfying conclusion. There's no annoying cliffhanger. The narrative sits, ready to proceed.