November 08, 2018
Disclaimer: This review of the second season of the Netflix miniseries, Castlevania, contains many spoilers!

One thing before I begin: Trevor Belmont's whip—called the Morning Star, but which I'll simply refer to as "explodey whip"—is quite possibly the coolest thing ever. More to the point, and what really matters, here, is that all three heroes—Sypha, Alucard and Trevor—were amazing in their own right. Each repeatedly does things per episode that had me sit upright and exclaim, "That was so cool!" And I'm usually pretty critical of recent animation, because so much of it nowadays fails to capture a certain weight. Here, that wasn't a problem. I was thoroughly wowed by the sheer visual heft. 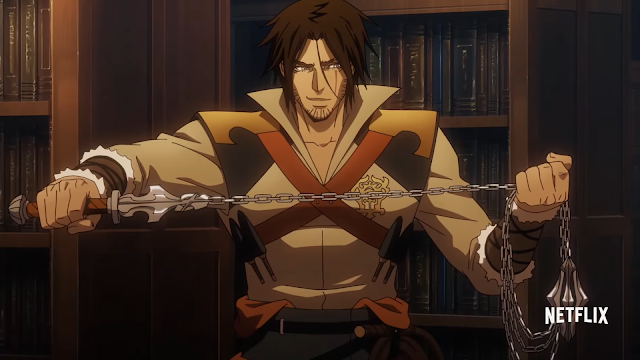 Better yet, the show feels faithful to the games, if you consider a loose adaptation faithful. Alucard's move set, the aforementioned "explodey whip" and Sypha's own magical repertoire all serve as nice visual nods to the attacks of their older, digital selves. Hell, they even rewrote a music track from the original videogame canon. Personally I would have preferred "Dance of Pales," but I'll take "Bloody Tears" over no music at all. These days, the franchise is well past its prime; I have to wonder who would know they're listening to a throwback at all?

In terms of Gothic atmosphere, the show isn't thoroughly invested in spookiness. Instead, Dracula's castle feels more like a human residence, albeit a monstrous war machine that teleports to and fro. Inside, the circuitous bowels are straightforward, an inversion of the typical illusion of scale, where the outside looks too small, and the inside is far too large. Instead, the outside looks gigantic and the inside is somewhat cramped, or abbreviated. One brief scene features some ghosts, at the very end of the last episode. Largely though, this is a court drama, with threats of war and persons plotting over the same, contested throne. It all feels somewhat pedestrian for a story about monsters begot from a nebulous, magic castle. Then again, feudal tensions were abundant in Horace Walpole's Castle of Otranto (1764). Said novella also featured a contested throne, dueling knights, and strange things afoot: animated miniatures, a giant helmet, and traps galore.

Wackiness aside, Walpole combined the supernatural with plenty of theatrical, almost mundane properties, pointedly merging the modern novel with elements of the ancient romance. To its credit, the new Castlevania does, however, emphasize monsters, action and theatrical dialogue. In that regard, it is very much like the videogames that proceeded it; all are focused on mythical creatures recycled in a chimeric, maze-like chateau. Game-wise, older titles shamelessly reuse the same sprites and animations featured in older entries. This is one quality from the show that is more subtle. Rest assured, there are old faces, namely Slogra and Gaibon. These two originally appeared in Super Castlevania 4 (1991) and later in Symphony of the Night (1997). Here, though, the inclusion is subtle: their names are not trumpeted; no neon sign is pointed at them. I suspect most viewers—i.e., those unaffiliated with their digital counterparts—will remain aloof regarding the tie-in. 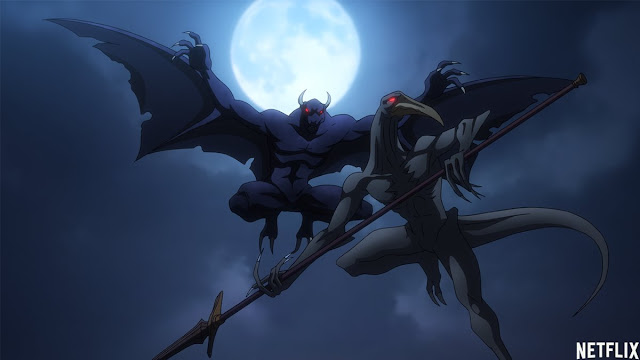 Not that it matters; this is largely a story of martial contest in nostalgic dress, intended for a fresh audience. Here, the show strikes a good balance of strong foes and heroes. That's not to say that there isn't fodder. For starters, there are plenty of identical foot soldiers and hapless villagers. The base of this pyramid is grounds for immediate and constant disembowelment. Heads are plucked off, hearts pulled out, and eyes pushed into their sockets. It's all rather gross. Mathew Lewis would approve.

Then there are the generals from Dracula's court. Yes, he has a court, though oddly his trusty confidant, Death, is nowhere to seen. Instead, it's a thong of shifty, disagreeable lieutenants. We don't learn most of their names. However, each remains visually distinct, and agile enough to avoid many of the traps laid at their feet. In other words, they live long enough for me to remember their costumes and supernatural abilities. The effect is not unlike that of Ninja Scroll (1996)—with plenty of powerful, visually-impressive baddies preceded by their wild abilities and outfits. Ask me  their names and I couldn't tell you—not unless they're involved in the plot, and by that I mean dialogue between characters. Exposition aside, plot requires dialogue and dialogue requires characters to address one another by name (sometimes nicknames or put-downs). SotN is somewhat infamous for laughably bad dialogue. Castlevania, in turn, delivers solid vocal performances from all its voice actors.

The plot, here, features ample players amid the constant slaughter. To be honest, the variety was welcome. The two human smiths who serve Dracula are nuanced and complete; Godbrand is kind of simple (though the show points this out more than once) and the lady vampire a foil to Dracula's patriarchal station. To her credit, she enjoys the role, even if she ultimately has little to do but stir the pot. Regardless, everyone fits onscreen; they scheme and plot in ways I could follow without feeling bored or confused. As for the three heroes, there's enough banter to make it fun, even if they travel and slay very little (at first). The dialogue addresses the action, i.e., "Oh, that's a fire drake; just what I need in a room full of paper!" Or, "Oh, I summoned Dracula's castle on top of the Belmont estate; hmm, probably not a good idea, given the entire library is essentially held up by earth and little else!" There's a logic to the action supplied by speech, but not in the middle of the fight; the fights are usually held between one against several, or two (or more) groups butting heads. Cross-cutting is used to clarify events and keep things brisk, but I never once felt confused by what I was hearing or looking at.

The action isn't just organized; it also packs a serious wallop. Often, Castlevania games feature a whip that literally makes monsters burst into flames; in certain titles, it even has fiery qualities when fully-upgraded. Here, the animators take that concept and crank it up to eleven; the explosions aren't lazy "Gundam spheres" or "Jello-O clouds." Every kill is volcanic. There's no exposition, though; the whip speaks for itself. Nothing is recycled, and the choreography is well-done. I could easily watch Trevor use the heirloom in a more whip-like fashion (no explosions) and still enjoy myself, too. For every explosion, there's a hundred tiny moves (and sly jokes) to appreciate. When a staff-user squares off against a swordsman or whip-bearer, the blade or chain slides down the length of the stick; here, these items behave a bit more like weapons—as actual levers or ropes—than simply light sabers. In other words, there's no "sword tag." Well, almost none. One kill features a villain stabbing another in such a way to appear to have gone through the armor's gaps. For one beautiful second, I actually thought the armor was behaving like armor. Alas, from a different angle we see the blade having punctured the steel like tin foil. So much for that, but thankfully most of the action doesn't focus on armored combat. Demons are too cool for armor, and the sins are few in that regard.

The tactics for every brawl are varied. Trevor faces many foes, or he and his friends face off against groups of enemies, or a single "boss" that require(s) them to work together. There's a lot going on, but it's paced well, with enough face-time devoted to each participant to make them feel relevant. More important still, each combatant feels powerful. At times, I felt like I was being catered to by someone who understood my expectations. Effectively the show delivers the goods; it also knows it, and twists the dial higher and higher. For example, I actually burst out laughing when Sypha zipped forward—yes, zipped, as though her feet were made of ice—to burn some poor fool's face off. Violence doesn't merely spring out of nowhere; it announces itself with style and relish. I loved every second of it.

None of the players are out-of-sync or -balance. Alucard isn't too strong and Trevor isn't too weak; nor is Dracula, etc. With so many participants, nothing feels lopsided, and the style of each combatant keeps things fresh. Trevor holds his own against a slew of monsters; Sypha has some very impressive magic; and Alucard can't beat Dracula one-on-one. These guys are a team, with no obvious champion. Yet, the Count can beat them all. For example, when Alucard seems like he might win, Dracula rebounds, trumping the would-be rally with a nasty counterattack. I was surprised, because this tale is a reiteration of Castlevania 3: Dracula's Curse (1989). There's a three-century gap between that game and SotN. Still, Alucard doesn't age; his voice is deep and his stature tall. And yet, we're shown proof of the heir's nascence through his oddly childish behavior and lack of abilities relative to his formidable sire. It's hard not to look at him and expect his older, SotN self, because he simply doesn't age; his problems are internalized. It made Dracula's sudden reversal exhilarating to watch. Also, vampire kung fu: it's every bit as awesome as you might think. 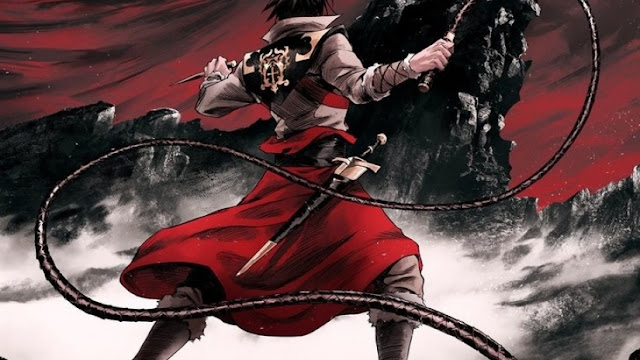 After a hearty scrap, Alucard is thrown into his childhood room, seemingly bested. Dracula has won. Seeing where they are, however, the lord crumbles. "Beaten," he yields, and allows his son to stake him. It doesn't fully work, though. Rather, Dracula's flesh rots off. Like a zombie, he shambles at his son and Alucard freezes, unable to act. In the nick of time, Trevor beheads the Count and Sypha burns the corpse. Here, Alucard's power is nicely offset by satisfying weaknesses that heighten the drama and vary the combat. Meanwhile, the linchpin of the formidable Dracula lies in plain sight: "histories longest suicide note." How apposite.

All in all, the second season is brisk and energetic. Both Trevor and Alucard's childhoods are mentioned, but not extensively so. Curious details, like the origins of the Belmont name, are explored without slowing anything down. The action never grinds to a halt, nor does it feel vacuous; the jokes are funny and land often. Dracula dies before the final episode (don't fret; he always comes back). Furthermore, Trevor's reign as man of the Belmont house (what's left of it, anyways) precludes the latter events in SotN. Perhaps the writers can jump back and forth, for season 3, and examine the same predicament in different periods. Until then, the writing and visuals are solid; the action, top-notch. If you played the videogames of yore, it will probably add to your enjoyment, but anyone can watch this show and partake in the fun.

Now, if only Metroid would get the same R-rated treatment...