November 13, 2018
Billy O'Brien's I Am Not a Serial Killer (2015) is the story of a young man growing up in a small town. The only son of a single, female mortician, he lives with his mother, learning how to embalm corpses. Small wonder he has something of an abnormal fascination with death, most notably serial killers. He pores over their hideous exploits, fluent in the modus operandi of many a slayer. However, when he meets an actual killer, very little makes sense, in terms of what he thinks he knows about these elusive individuals. 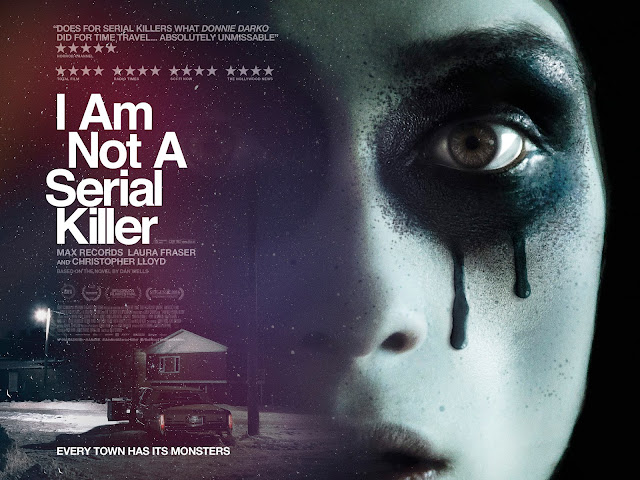 IANaSK is an interesting horror film, on different levels. It's perspective is somewhat displaced, a frank examination of death in small communities via its tortured protagonist. However, small pinches of quirky humor introduce levity to counterbalance the dark subject matter. One quirky scene involves the protagonist being told by his therapist to behold a sensational object: a duck, coasting on a distant waterfront. The hero is confused, uncertain of the significance. Did William Cullen Bryant find ducks as humorous as Monty Python? I wasn't sure, myself, but chuckled all the same at John's matter-of-fact statement, "...It's a duck."

The director, O'Brien, is foreign—Irish, but unlike Conor McMahon's From the Dark (2014) or Corin Hardy's The Hallow (2015) the film is set in America. O'Brien brings a sense of other-worldliness to the killer, a plant-like being on par with dryads or sidhe (which is pronounced "she:" i.e., bean sidhe—banshee). Sidhe means "fairy" or "mounds," a creature or place associated with the wild unknown, but also death. In turn, both haunt and occupant are interlinked between themselves, and attached to real locations: the forest and vale, but also graveyard. At times, one cannot easily say where one stands though comparison; not all sidhe are good, nor bad. Worse, the fear is not always of the monster, but being near it in a shared space. Sometimes, the residence or territory is quaint or placid, sometimes the resident. However, if one's actions can be guided by the precedent of earlier behaviors that result from proximity with the horrendous—say a vampire or werewolf—then perhaps the worst kinds of monsters are those that hide in plain sight; the most dangerous places are the ones that seem safe.

John is openly sociopathic. There's no eventual reveal concerning his homicidal thoughts; he explains them right off the bat. One hypnotic scene has him spelling out why he smiles to the bully hectoring him at the school dance, in front of the pretty girl. His foe is wearing a costume to make him appear dead—everyone is dressed to reflect group curiosities with murder and death, or media bent on such morbid fascinations (one small nit-pick, though: the clown's name from It is not It, but Pennywise). The hero is different because he's not faking it; he's polite to the bully if only because otherwise he'd gut him like a fish. To John, the bully is no more important than a cardboard box.

It's fun to watch how disarmed the bully is. "You're a freak!" he cries, withdrawing in haste. And to a certain extent, the bully isn't wrong. John is different, and not necessarily in a good way. We're clearly not meant to like the bully, here. At the same time, we're put into an uncomfortable position by aligning ourselves with the hero, who has some pretty glaring problems. What makes the film fun is the fact that John tries—to listen to his therapist, despite not feeling anything (or so he says). He has no compass; he obeys rules that help him fit in. The cute girl is attracted to him, no matter what he does; his mother loves him even when he pulls a knife on her. The real tension derives from the argument that any sense of morality is determined by action, and that John is constantly teetering on the edge of a knife.

The predicament involves John's aged, seemingly-innocuous neighbor, Mr. Crowley. Played superbly by Christoper Lloyd, the old man seems pretty harmless... until he's not. Crowley's homicidal nature is announced with superb misdirection, made all the more nuanced by John's own behavior as the sole witness. John becomes worried about the shady hitchhiker Crowley invites along on a fishing trip. What seems to be an empathetic front is actually John's protective nature; his care for Crowley's safety is legitimized through a lack of subterfuge: there is no audience for him to fool. While the movie allows John no time to reflect on his sudden altruism, it remains a furtive clue to his seemingly elusive empathy—his eventual claim to his mother that he "feels nothing at all." Despite such strident declarations, John is solicitous. 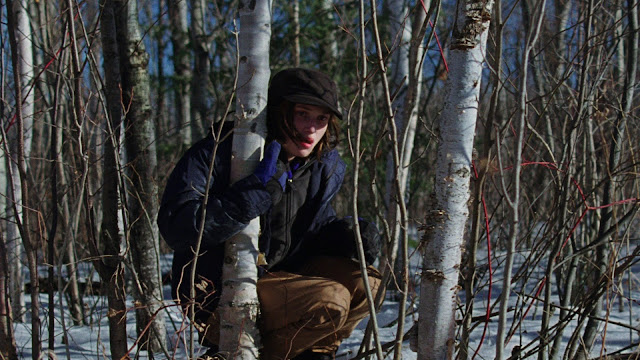 While O'Brien toys with his (and our) expectations, John watches nervously from the treeline. John's not wrong about Crowley's new "friend" being murderous; he is wrong about this individual having the upper hand. At the frozen lake, the man saws through the ice with a chainsaw. Is it a tool, or an improvised weapon, and will the tramp turn it on Crowley? Crowley begins to cough, turning his back on his ambiguous guest. In turn, the other man produces a kitchen knife and begins to advance. Both the knife and chainsaw are infamous weapons in Hollywood movies, but the latter has no purpose out on the ice but slaughter. The man's intent becomes clear. However, the seemingly disadvantaged codger wheels around to skewer him, his fingers transforming into branch-like spikes. Surprise!

After the clever reveal, John is stuck with the knowledge of whom the true killer is, and what to do about it. The results are worrisome. When John calls the cops, Crowley kills them; when John catches Crowley in the act, the monster rebuffs his pleas. So John must bait Crowley by subduing his wife, after which John takes a photo and sends it to his nemesis. At this stage, John is dangerously close to the edge, mere actions away from becoming the very thing he abhors. In this sense, Crowley doubles him. So when the older killer quotes William Blake's "The Tyger" (1794) as a kind of riddle, it's as much for John as Crowley. In the poem, the contrast between tiger and lamb is constant; in the movie, the same is true, but with the added twist of a reversal. With his back against the wall, Crowley reveals that he loves his wife. He stayed human all these years for her, because she is quite literally his humanizing element. Even so, he's still very much a killer, a tiger with lamb-like qualities. With John, the inverse is true: innocent, and constantly tempted, versus embracing the killer inside himself that Crowley reflects.

Crowley is something of an apex hunter, widening his net to trap anyone who falls inside, including other killers. He also hunts at night, wary of exposure. This reinforces John's belief that such myths—of werewolves and vampires—were originally meant to address human behaviors, or places affiliated with them. These locations can be the Radcliffean faraway of a fantastic, exotic Italy (replete with bandits). Or it can be a displaced menace that actually refers to the domain of the reader they escape through media consumption. Such legends, or their hovels, take the object of fear and "relocate" it to the safety of media, which serves to buffer one from the deplorable. Even John, when faced with a true killer, reacts in horror—not because Crowley is a killer, but because Crowley is John's friend. Crowley's conduct makes John afraid, because it says more about John than he cares to admit. John is scared to relate to a killer he has something in common with, a man with something to hide.

Such behavior feels like a natural, animal cycle, in IANaSK, and yet Crowley is a strange, plant-like creature. On par with the pod-people from Invasion of the Body Snatchers (1978), humans are copied in such a way to belie the natural order by replicating it. Nothing quite makes sense, even to an expert like John; even when there's a pattern, something paradoxical emerges, scrambling the paradigm. Normally paradox is broached from a normalized perspective. However, IANaSK reverses the binary at the end and humanizes the killer. The confusion surfaces, then, not because he is a tiger amongst lambs, but a tiger with lamb-like properties. In both situations, the movie dares to ask, "why is it allowed?" and then allows it. 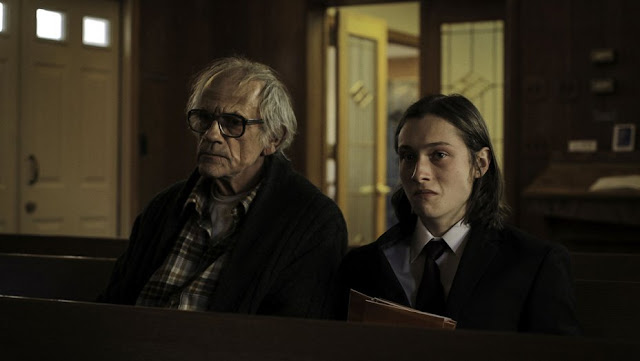 Gothic stories elide bifurcated factions on a regular basis. No matter how alien, monsters are humanized; no matter how normal, humans are demonized, but in a liminal affect of one being trapped in a state of constant suggestion. Undesirable qualities can be displaced, only to be exposed again via inadvertent empathy with the horrifying. Confronting the monstrous requires two factors: a sense of partial division, and a human element to bridge the gap. Both exist, yet short-circuit when fused. To maintain paradox, O'Brien introduces Blake's animal dichotomy only to conflate it. This undermines dread to relax dramatic tension present within John, and Crowley is shown to have a heart, after all. As a hybrid, the movie argues with its own premise. Awful, both men remain sympathetic. My only gripe was the monster's ultimate reveal. Escaping its human shell, the alien delivers a brief soliloquy on Blake's poem. Not only is the coda redundant; the special effects falter when they need to shine.

The misstep is mercifully brief, however. The movie ends, its crisis resolved. John's late therapist is embalmed to Norman Greenbaum's "Spirit in the Sky" (1969); the boy's relationship with his mother is restored. The takeaway is fun, versus ominous. The build-up is grim, but ends with a curious premise: life continues to delight us when those we love aren't quite who we think they are. Despite Crowley being what he is, his wife is none-the-wiser and loves him; despite John being what John is, his mother loves him, as does the pretty girl. Both men are loved and capable of it, in return. It's an off-beat conclusion to the initial roller coaster climb, but one I relished, and would happily recommend to anyone seeking a hybrid horror movie.