April 17, 2020
Hi, this is Nick van der Waard. Starting next Friday, I will starting interviews for "Hell-blazers: Speedrunning Doom Eternal," my new Q&A series on Doom Eternal (2020). My blog is about horror, but also sex, metal and videogames; "Hell-blazers" explores some of those idea in Doom Eternal.
For all the interviews, please refer to this compendium. 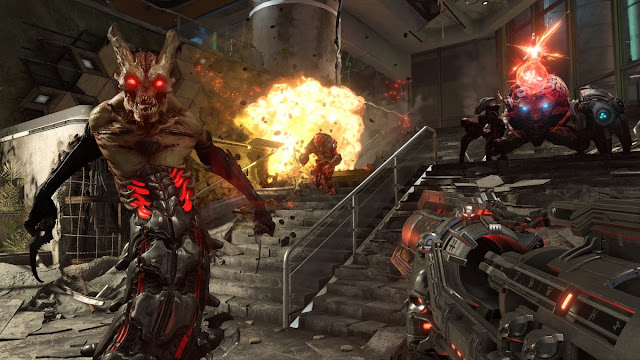 This interview series examines Doom Eternal as a game to be played fast—not just by speedrunners, but Twitch streamers of all sorts: DraQu, The Spud Hunter, Byte Me, King Dime, and Under the Mayo. The Spud Hunter isn't a speedrunner, for example; he's an arena combat specialist, but still plays the game quickly because of its design.

This Q&A examines different aspects of gameplay in Doom Eternal. These include: Difficulty, Speed, Glitches, Game Length, and Technique. It also examines how Doom Eternal is played by speedrunners. Doom Eternal caters to many different styles, which typically manifest as categories: glitches/glitchless, 100%/0%, and so on. Some "warp" past much of the game; others try to preserve the core gameplay experience while also sprinting to the finish line.

I'm a Gothic post-grad whose work largely pertains to speedrunning Metroidvania, but also horror FPS. These interviews are an extension of my independent research, which I'd like to outline here—as it pertains to the Q&A, and future articles I plan to write once it is done. 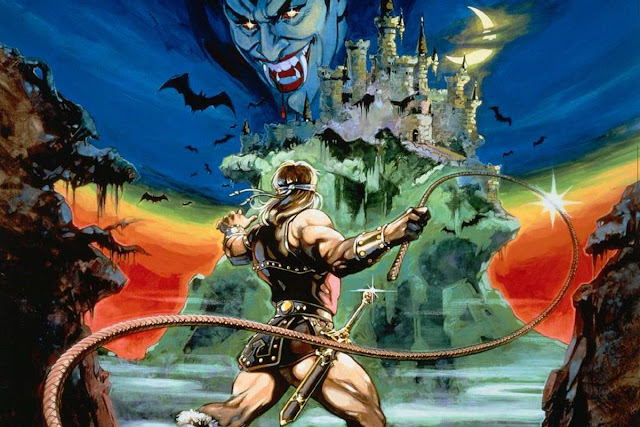 Speedrunners refer to non-speedrunners as "casuals," implying a difficulty exclusive to their own craft. While they are undeniably skilled, these players' attempts at mastery are just that, attempts. In this sense, it's not the player mastering the game, but the game mastering the player. Or, as Seth Giddings and Helen Kennedy write,


"Conventional assumptions that players learn the game system to achieve mastery over it—and that this mastery is the source of the prime pleasure of gameplay—is in fact an inversion of the dynamics and pleasures of videogame play. Games configure their players, allowing progression through the game only if the players recognize what they are being prompted to do, and comply with these coded instructions" (13-14, "Little jesuses and fuck-off robots").

Yes, speedrunners deconstruct videogames by learning them inside-out, but it can be surprising how faithful speedrunners are. Consider Matt Turk: He beat Punch Out! (1987) incredibly fast, but still took the time to knock his opponents out, onscreen. 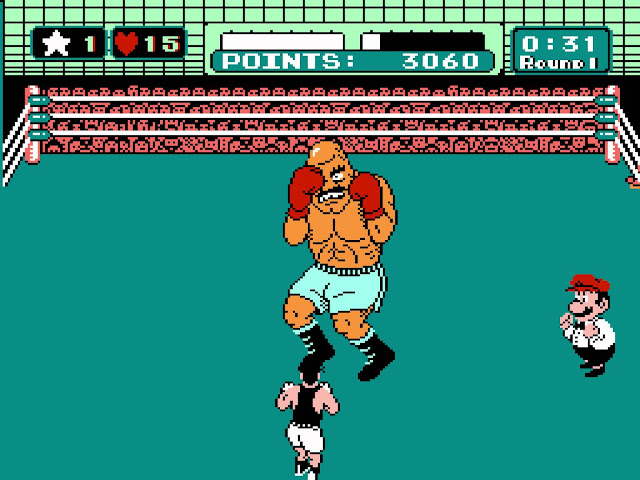 This largely is where the game takes place, and translates to an experience informed by in-game rules that are broken less often that you might think. Generally it's the videogame that has the last word, not the player. This is because the game provides its players with a pre-existing framework to work inside—a set of rules, levels and components to obey. Speedrunners are no exception, obeying  through partial disobedience, not total. They break some rules, but seldom all of them. If they did, the game by and large wouldn't exist.

Metroidvania, for example, are built with deconstruction in mind; they do not break as easily as A Link to the Past (1991) or Doom Eternal (2020). Yet, while the degree to which Doom Eternal can be broken is high, it is seldom broken to its full potential. Consider Zero Master's latest video, where he beats Doom Eternal on Ultra-Nightmare in two hours and twenty-five minutes. Zero Master's knowledge—of the game world and its rules—allows him to move as fast as possible inside it, without invoking major glitches. So does Byte Me, who completes every single mastery challenge without using mastery tokens.

Idiosyncratic categories like this aren't unusual; The Mexican Runner does something very similar with his "hater-percent" category for Cup Head (2017). They demonstrate speedrunner creativity inside a pre-exisiting set of rules, while also establishing their own. Generally the two are not mutually exclusive, but operate in harmony. 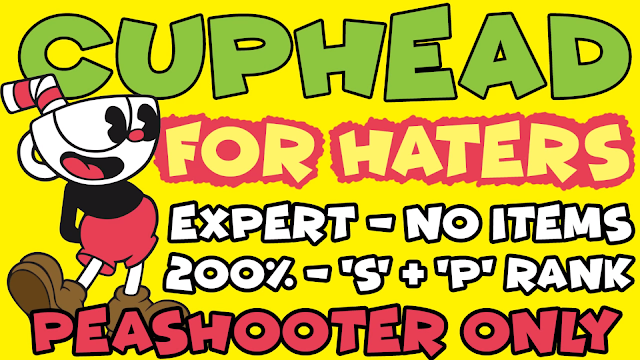 In speedruns, time becomes a currency—exchanged between the player and the game, including its textual elements. Gothic stories concern time-spaces replete with past language. Videogames are no different. Attempts by speedrunners to master the gameworld generally mirror the quest of the hero, who has their own demon to slay.

Throughout a run, a speedrunner can gain time. However, they can also lose it—when they make a mistake, or when the run "dies." Failed attempts deprive them of all the time they had earned—say nothing of the hundreds and thousands of hours spent grinding off-screen! In this sense, the player combats their old personal record, but in relation to the gameworld as something to best. The biggest monster they face is themselves, but an older, darker version of it exemplified by the game's hideous bestiary and locale. Something is always destroyed in the exchange.

My research concerns ludic spaces through their Gothic treatment of time. Two ideas central to my work include Bakhtin's chronotope and Derrida's notion of hauntology. 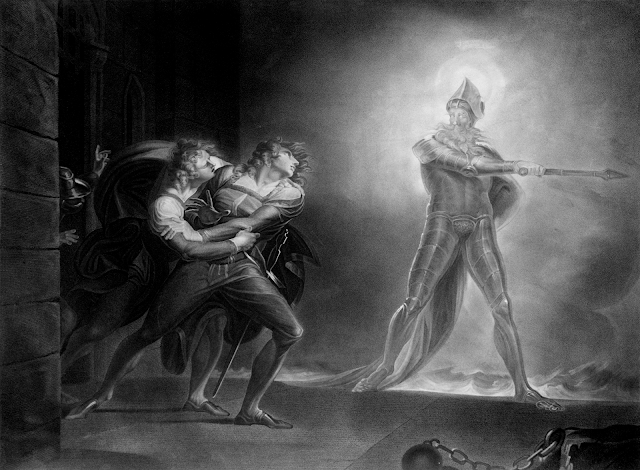 Bakhtin wrote about chronotopes, or "time-space." For him, the Gothic chronotope evoked time in the narrow sense of the word: the historical past. And yet, there were also different schools of the Gothic novel Bakhtin fails to mention: terror (imagination) and horror (monsters). These have their own canonical lineages to consider, and idiosyncratic treatments of the Gothic in a classic sense: the hauntological, or separation of a past aesthetic from its historical roots to "trap" it in the present. There, it exists partially as something new, but cannot wholly be divorced from the past as a system of language, either (Castlevania is the perfect example of this).

I say "classic," because even though Derrida is largely credited with having coined the term, Horace Walpole adumbrated it, centuries prior, with "gloomth" (a portmanteau of "gloom" and "warmth"). This word was used to describe his unique treatment of architecture—not just in literature, but also in reality with his own home, Strawberry Hill House.

Speedrunners have their own histories to consider. As the practice has evolved into its own, a great deal of time has been spent inside digital spaces. In my opinion, these locations are particularly conducive not only to speedrunning, but Gothic themes. 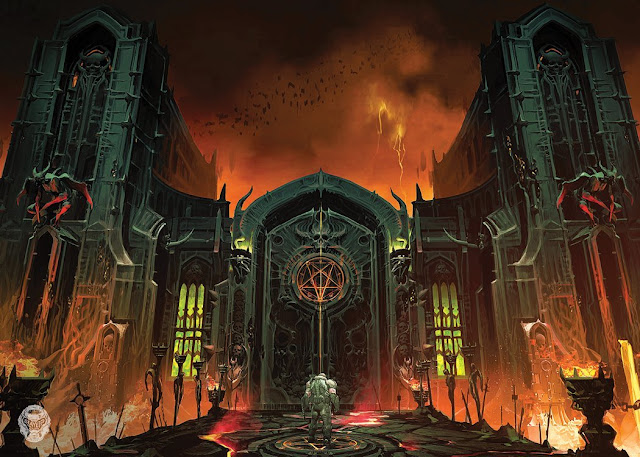 This includes Doom Eternal, which supplies the player with retro-future, machine cities and resurrected castles—to explore, but also be dominated by. These are at least visually similar to those in Metroidvania. Whether they teleologically are, or not, is open for debate. Nonetheless, a speedrunner's recursive motion indicates a fatal attraction: to master the space in question by escaping or destroying it—a tenuous proposition. Breaking the game doesn't do this; speedrunners will simply make other categories. Nor does achieving the theoretical "best time"; new videogames will always emerge, extending the struggle indefinitely.

Keeping my research in mind, this Q&A raises questions about various aspects of game design and speedrunning to consider how Doom Eternal is different from other games in the franchise.

When compared to 2016 or classic Doom (1993), player mobility in Doom Eternal is a bit like going from Mega Man 1 (1987) to Mega Man X (1993). Not only could X charge his beam; he could also dash and wall jump. In Eternal, the Slayer can dash through the air, climb walls, and use the meat hook to fly around like the Tasmanian Devil. However, the Slayer in 2016 could Gauss-boost like nobody's business. These game worlds are very different, but so are the player characters moving inside them. Speed is relative. 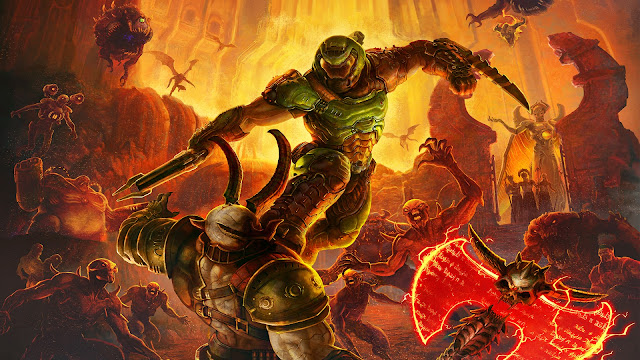 These differences abide by the gameworld and its rules. Consider ammo: Doom Eternal gives the player very small ammo counters. This forces them to switch from weapon-to-weapon within a movement scheme that is unique to Doom Eternal. There is no SR50 like the classic games. However, comparing Doom Eternal to Quake (1996) is also imperfect: The Slayer cannot rocket jump, nor move the way the player can in those games.

In classic Doom (1993), not only are the demons the same difficulty throughout the entire game, but the damage done to them is somewhat random; likewise, the Doom marine is the same level of toughness from beginning to end, and only becomes stronger through limited pick-ups, not permanent ones. In Doom Eternal, the Slayer is a progressively stronger hero. Not unlike Samus Aran, he finds permanent upgrades that make him much more mobile, tanky and lethal. His damage isn't random, but its capacity for quick, deadly blows far exceeds the original Doom marine's.

Doom is a FPS franchise and always occurs from a 1st-person point of view. This means you can be attacked from any angle, but can't always see where the damage is coming from. In classic Doom, use of cover is less about objects inside the room and more about doors and corners—handy when pitted against hit-scan enemies whose attacks cannot be dodged. There are no hit-scanners in Doom Eternal, and its monkey bars and flying enemies let the player soar through the air. Cover isn't needed when you can fly faster than enemy projectiles.

Despite this tremendous advantage, the Slayer in Doom Eternal is still being attacked by monsters who are more numerous, armored and aggressive than their classic/2016 counterparts. This includes trash enemies. Doom Eternal offers a unique challenge in the Doom franchise: With so many projectile-based enemies, it becomes something of a "bullet-hell" experience for players to survive. 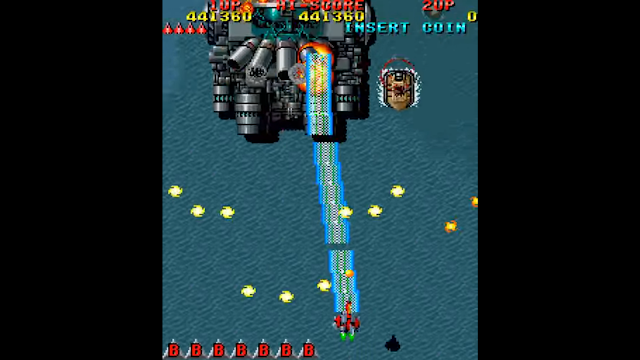 It shouldn't be a surprise, then, to see certain power-ups and weapons "sweeping" the screen (similar to how bomb-type abilities did, in Raiden [1990] and other classic shoot-'em-ups). Luckily they feel like novelties, and are quickly eclipsed by normal combat strategies in terms of actual effectiveness. Compared to the Slayer's ordinary combat regimen, which already has multiple, "get-out-of-jail-free" cards, temporary power-ups like Berserk feel half-baked. So does the Unmaykr, which shares ammo with a bigger, better gun, the BFG (the ground is also littered with Crucible ammo—another more effective weapon).

Doom Eternal remains Promethean, but differently than its 2016 predecessor. That game treated argent energy as scientific ("It works."). Doom Eternal offers a much more fantastical explanation: Argent energy is essentially the souls of the tortured dead, procured in a hellish place called Nekravol, the city of the damned. It's full of infernal imagery meant to evoke Numinous feelings (whether or not it does is another story. Blame Samuel and his big mouth).

In regards to the differences mentioned above, this Q&A examines the hurdles that speedrunners face when playing an evolved Doom—not simply the in-game monsters, but other aspects put into the game by developers who aren't speedrunners themselves: invisible walls, cutscenes and unskippable events, i.e., the animation for loading sentinel batteries (and needing two of them per door for some reason).

All of these factors force players to play the game in a singular fashion. By his own admission, Hugo Martin says so. This becomes another hurdle for speedrunners to consider when speedrunning Doom Eternal. Like normal players, speedrunners cannot see in all directions, and can be rudely shot in the back. They're also expected to take a certain amount of damage, lest they "break the game" altogether. Many do, but just as many submit to the game's requirements. When this happens, a speedrunner will need to gather resources, and "peel the onion" under duress, just like like normal players.

Ostensibly. For some speedrunners, the challenge lies in how much they can bypass these demands without resorting to glitches that break the game, too. When they preserve the game, they also preserve its story and imagery—themes included. 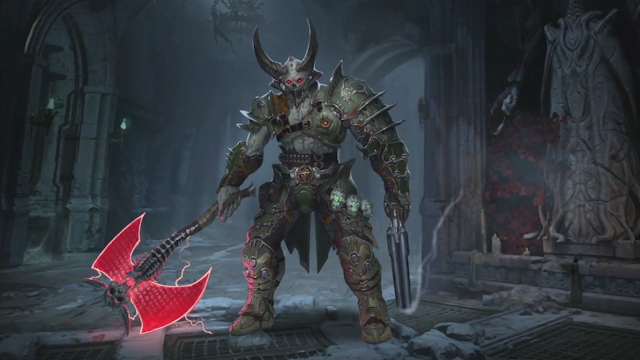 Lastly, this Q&A examines how these requirements differ from those seen in classic Doom and 2016. Doom Eternal has moved away from the "speed chess with guns approach" Doom 2016 introduced. Its enemies have too many attacks to act as single "chess pieces"; they also fight in greater numbers, say nothing of RNG. Pitted against them, the player must think to survive, but in a narrow, aggressive system far different from 2016's "chessboard."

***
My name is Nick van der Waard and I'm a Gothic ludologist. I have my MA in English Studies: The Gothic from Manchester Metropolitan University.