December 20, 2019
The Boys (2019) is an excellent show in a lot of respects. In this review of season one, I'll be going into great detail as to why it's so good. Spoiler alert!

I don't like superheros. They're just... lame. This being said, The Boys bucks a lot of the trends that irritate me about the genre—a lack of wholesome, raunchy sex and good ol'-fashioned ultraviolence. But simply injecting these elements can have a bloating effect, doing little to address my pet peeves. As much as I enjoyed Brightburn, for example, it largely felt formulaic, stock. In other words, the violence didn't make up the heart of the experience; it was merely a coat of paint. 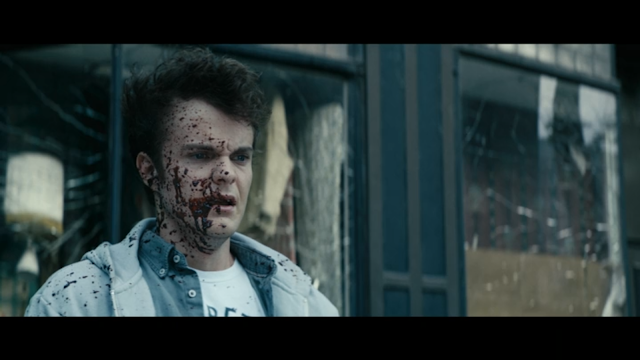 In The Boys nothing could be further from the truth. The show is undeniably extreme in this regard, but the violence-in-question drives the actions of the cast. Within the first ten minutes of the show, local city bumpkin Hughie meets with his girlfriend... only to have her blown to pieces. And you might say to yourself, "Wait, it's too soon for that!" But violence needn't involve main players in Act V; it can deal with lesser ones, early on.

Just read Macbeth. Macbeth schooled Macdonwald so bad he "unseam'd him from the nave to the chaps / And fix'd his head upon [the] battlements." Likewise, Banquo is killed, only to later become a ghost. That's the nature of tragedy and it can strike whenever the writer pleases. So, when Hughie's girlfriend buys the farm, we're not meant to feel sorry for her; we're expected to identify with Hughie. The show does an excellent job in this respect. It places him center-stage, showing him struggle with first not fighting back, and then slowly wandering down the path of revenge (with a little help from Karl Urban, dark and brooding like I've seen him before).

This goes beyond imitation. As Hughie wends the bloody road of a reluctant avenger, he faces one obstacle after another. First, he fights back and eventually kill a "supe" (slang for superhero): Transparent, a man with diamond-hard skin who also can turn invisible. I feel many shows would treat this arc as the main conflict, at least for season one. With The Boys, it's only the beginning. The struggles Hughie faces afterward are less bloody but far more engaging dramatically. Blowing up Transparent was easy—the guy was a total dick, and bent on seeing Hughie dead. But lying to the girl you fall for while also trying to hide the fact that you sometimes see your dead girlfriend? I felt surprised by the gravity of the latter over the former. I empathized. 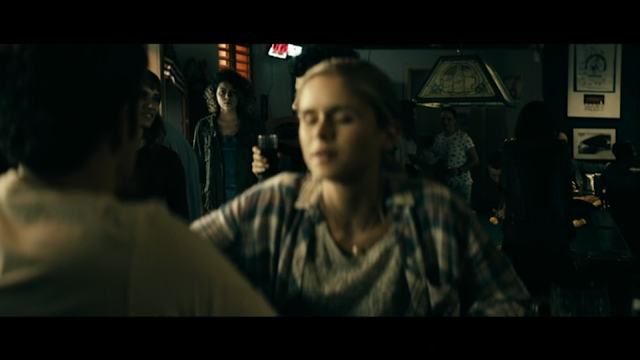 While the show portrays how senselessness violence can be, it also pokes fun. Much of the mayhem is laced with black humor. Yet, as things progress, the threat of violence looms over characters we grow to care about. At first, Frenchie, Billy and Mother's Milk felt flat, rote. But they quickly fattened on the run, transforming into fully-fledged characters. None of this interfered with the show's humor, nor the overarching story being a dramatic success.

There isn't so much a main plot here as there are multiple threads that interweave. There's Hughie and his quest, which in certain respects mirror Billy's (the show has some tricks up its sleeve in regards to that, however). Then there's the supes themselves and what they get up to. And here, the spectrum of superheroes is surprisingly varied. There's the Seven, a group of heroes sold to the public by Madelyn Stillwell, the ambitious corporate big-shot. Then there's Starlight, the small-town girl with big dreams.

What's especially great is how none of them are secure, or on the top. They're all hungry for something. Even Homelander has it rough; despite being a literal superman, he's basically Frankenstein's monster ("You are my greatest failure."). Furthermore, he's a chilling personification of America now, versus the halcyon Americana Superman stood for, years ago—a fact I very much enjoyed; Superman is pretty lame, and seeing him lampooned in ways that are politically relevant and critically sharp felt exciting and fresh. In spite of how awful Homelander is, he's the vice character, and watching him work is equal parts uncomfortable and riveting. 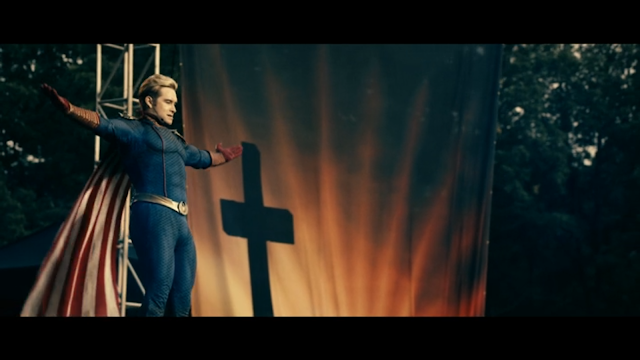 All of this is woven into a modern narrative where social media is inescapable. Despite their powers, the supes are basically actors pretending to save people who buy corporate merchandise. Except, what happens when they decide to actually try and be heroes? The answer might (not) surprise you: They decide humans are insects that a) aren't worth saving, or b) saved merely to aggrandize the savior. Good, ol'-fashioned hubris, folks... and soulless corporate machinery whittling away at their god-like reserves.

I loved the dialogue in the show. When Homelander goes to his "father," the old doctor lies to him. But the writers portray it as brutal honesty instead, mixing lies with bits of truth. It does wonders for the twist, when it happens. At the same time, we don't see the reveal until much later, and are only told about it: "I squeezed the truth out of him!" Homelander angrily declares, speaking literally. We're left feeling chagrined, and allowed to imagine what happened.

I also enjoyed seeing Homelander turn Superman on his head, doing so in ways Brightburn couldn't. Unlike that little monster, Homelander is fully-formed, and ready to wreak havoc. But some of the most unsettling moments are simply him looking at people. Like Superman, he has x-ray vision and acute hearing. In other words, he can see through your skin and read your fear. Similar to Hannibal Lector, his gaze becomes discomforting the moment you realize the seer isn't benign, but nefarious. 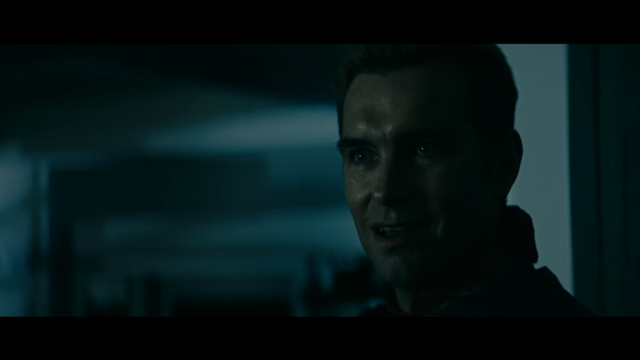 Homelander also sees himself as superior to humans. His foil, Billy, hates supes, and isn't scared of him. In Superman's universe, the hero is omnipotent, the villain relying on his brains (and bad writing devices). In The Boys, the villain has brains and superpowers, and Kryptonite doesn't exist; the hero is simply an ordinary man guided by hate. It's a nice reversal, with much better writing than the standard-issue comic book.

The subplots are engaging as well. Starlight is raped (forced oral sex); later, her dim-witted rapist is raped himself (forced gill[?] sex). I don't think I've ever seen a show portray female-on-male rape before, let alone use it as a plot arc. But here, Starlight overcomes her experience, and the Deep gets his comeuppance. He's a bit of a dim bulb to start with, say nothing of his very poor attempts to rescue a dolphin from SeaWorld. It's satisfying to see him suffer, while also being too dumb to understand why.

The Deep empathizes with animals a little too much: He doesn't just want to save them; he wants to have sex with them. He seems like the kind of character envisioned by Brody from Mallrats ("Is his dork made out of orange rock like the rest of his body?"). That's hardly a disservice considering what Stan Lee tells him: "It's a secret of the pros," he insists. Well, now those secrets are out in the open, and it's funny as hell. 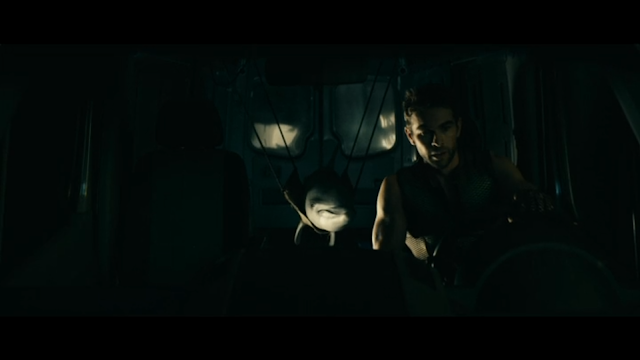 The gore is great. I always thought Marvel films got the physics wrong. Here, it seems much more on point. Clark Kent was the Man of Steel; normal people are not made from steel, so their bodies are going to fly apart when they try to fly supersonic, or get slugged by a demi-god. So while the heroes themselves are pretty durable, regular people are not. Hughie's girlfriend is a prime example, being gibbed like something out of a videogame when A-Train runs through her.

Probably the most regular fatality in the show is caused by Homelander's eye lasers. As explained on Because Science, the light saber is a beam of plasma that, when exposed to the human body, would instantly evaporate the water inside, causing the unhappy recipient to balloon and explode (while also catching on fire). Well, Homelander's eyes are basically light sabers, having the actual effect plasma would on a human body. So while the exploding bodies from his attacks might seem gratuitous, it's only because we're used to having things toned down.

And not to keep comparing The Boys to Brightburn, but the winner of the lasers-through-the-eyes contest is definitely The Boys. "But why didn't her head explode?" you ask. Personally I think Homelander is able to control his powers well enough to "slow-cook" Elizabeth Shue's brains—torture, in other words. And if that seems awful and fucked up, well, it is. But more importantly (from a gorehound's perspective), it's a totally nasty kill—shocking, too, considering Shue wasn't playing a minor role; unlike Hughie's girlfriend, I felt something when she died because the show had built her up to take the fall. 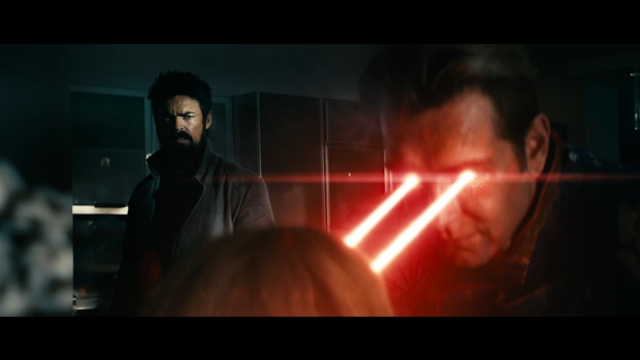 The show basically treats superheroes like Greek gods; they take drugs, make mistakes, and they're incredibly hedonistic and lazy. Amid all this wanton ribaldry there remains room for tragic backstories—Billy's, but also his mentor, an aging woman with two dead grandchildren who's stuck watching birds. Will Hughie share in their miserable fate? I'm not sure, but I absolutely loved the tragedy actively spanning over three generations. Most of the time, you're lucky if you get one.

And then there's the Big Twist. Billy's own quest for revenge leads him to try and "wound" Homelander by hurting those he cares about. Instead, the plan backfires spectacularly and Billy finds himself face-to-face with his long-missing wife. Not only is she not dead and unviolated; she also left her husband to raise her and Homelander's love child! It's a great amount of irony and delivered with Billy at his most vulnerable. His entire quest has been based on a lie, and by the person he cared for having stabbed him in the back.