December 13, 2019
I'll just say this up front: Terminator: Dark Fate (2019) isn't comparable to Cameron's movies. That's okay, though; most aren't. This being said, I don't want to hate on this film. I certainly wasn't going into it with that intention; I love the Terminator series and tend not to dismiss its entries outright. Like other latter-day entries, Dark Fate was a mixture of good and bad, and I'll cover both in this review. Spoilers! 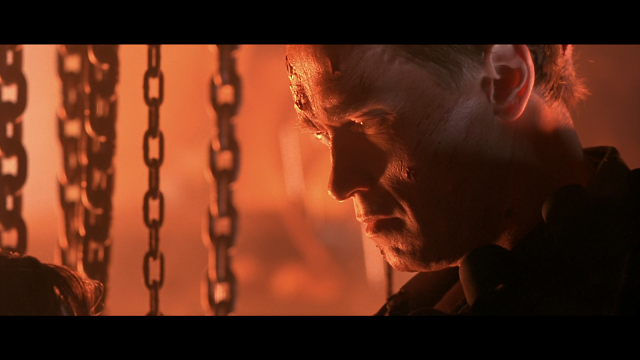 "I came across time for you, Sarah; I love you, always have."

"I now know why you cry, but it is something I can never do."

Lines like these stick with you—for what they meant at the time they were said. By comparison the dialogue in Dark Fate is largely exposition. To be fair, the first two movies had exposition too, but it's the manner to which they spell it out that makes it effective. In The Terminator (1984), Reese barely has time to explain anything; he's on the run from the cops and the T-800, all while trying to keep Sarah from running away. Not an easy job and the movie does well at conveying just how difficult his position is. So when he explains the situation to Sarah (and to us), it's in fragments ("The 600 series had rubber skin...").

In Dark Fate, Grace says exactly what they're dealing with, and seldom while they're actively being chased. There's considerably less to distract her from talking. As a result, she can say as much as she wants. But sometimes less is more. The biggest problem with the Rev-9 is how Miller tips his hand way too early. By the first chase scene, he shows us the machine's gamut of tricks—its ability to liquefy and split into two versions of itself, one semi-solid and one skeletal. The idea is novel enough, but Miller spoils it; what makes the T-800 and T-1000 so enjoyable is how Cameron teased out their capabilities throughout their respective movies. By comparison, the Rev-9 has almost nothing to offer beyond moving really fast, which looks cartoonish and fake.

My biggest complaint wasn't Dani, even though she felt underwritten and incredibly boring. It was the movie's inability to present her in an engaging manner. Barely ten minutes pass before she's under attack, with no time to establish who she is; she literally says hi to her dad and goes off to work. Sarah, by comparison, goes to work, actually works, goes home, gets stood up, goes out to eat, gets spooked by the TV at a bar, then goes to Tech-noir and calls the cops. Her plight has time to play out; we actually have a chance to see her hopeful, upset and scared before Arnold crashes the party. She fights with Reese, and finally sides with him. In other words, she progresses. 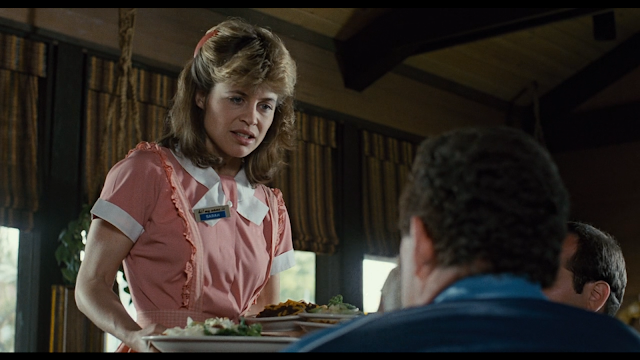 Same idea with John, in T2 (1991). We see him with his buddy in the garage; the two steal some money and go to the arcade, but not before Budnick sees Sarah's photo and John gives his "total loser" speech. The buildup is briefer, but John spends a lot more time waxing nostalgic about his past than Sarah does, and in ways that play out organically. He hates his mother, but grows to forgive and love her again. It doesn't feel rote because, like with Reese, it plays out on the run, on a mission that feels engaging from start to finish, even during the lulls.

This sense of gravity is virtually non-existent in Dark Fate. Partly because we don't know how the world ends. In the first two movies it was nuclear fire—a vivid enough image. In Dark Fate, I really wasn't sure what happened. There's nothing so clear as "There was a nuclear war," or Sarah's nightmare. Even though Grace explains it, I couldn't picture the end of the world. As result, I couldn't feel the weight of the mission this time around.

To be fair, Mackenzie Davis does a decent job as Grace, Dani's protector. She's strong, fast and capable, and most importantly no-nonsense. You get the feeling her mission is more important than anyone in the present—a fact she demonstrates by knocking everyone she sees out cold. She's tall, formidable, and believable as the future soldier. If only the writers shared her implaccable resolve. She's also kind of sexy—caught more than once in poses or positions that emphasize her curves. Not that I minded; Reese was something of a sex object, too. 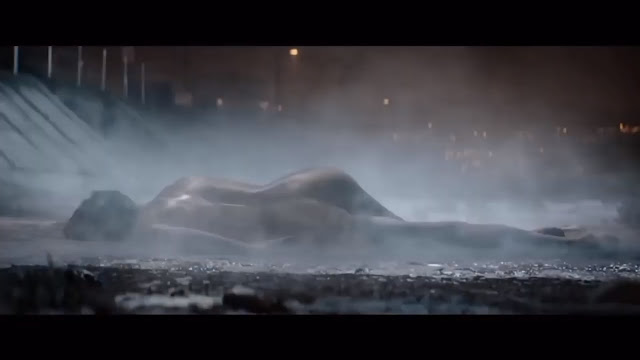 The future war scenes are hardly nightmarish. For one, they're shot during the day. There's no trademark blue palette courtesy of Adam Greenberg to throw everything into hellish relief. Miller has T-800s (not Rev models) armed with phased plasma rifles, but they're standing on a beach in broad daylight. It looks strange, and doesn't fit the movie's own lore. More than that, it feels rushed. Had they consolidated a single future war scene like T1 or T2 did, I think it would have worked much better.

Why do the future war scenes from the earlier movies work so well, though? For starters, they're gritty and dark, the bellicose mayhem preceded by a deep metallic synthesizer. And then the practical shit hits in the fan. These sequences play out in an extended, explosive ballet. We see soldiers killed before our eyes, H-Ks blown to bits; battles won and battles lost. By comparison, the future war scenes in Dark Fate are truncated, overexposed, and explained to death. It really siphons out the pathos. So do Miller's less-than-stellar visual effects.

Another oddity in Dark Fate is the technology of the Resistance and how it inexplicably makes a huge jump. How do things go from Dani saving Grace with a rag-tag band of merry men, to Grace and a squadron of soldiers straight out of Starship Troopers descending in a drone-like dropship? It's not simply that the technology looked different. Where did it come from? In Cameron's movies, Skynet and the Resistance had similar weapons. The human soldiers simply had worse versions, stolen relics to give them a fighting chance. In Dark Fate, Legion's soldiers don't use projectile weapons at all—no tanks, no planes, no automobiles. There's just nothing for the Resistance to steal. So where the hell did they get them? 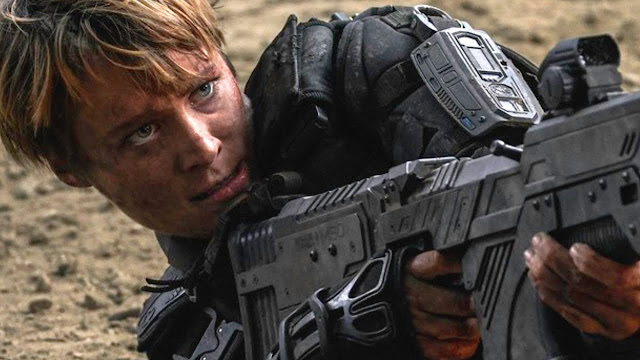 About Legion. Unlike Skynet, they're only mentioned once. And the emphasis on Legion being connected with this Rev-9 is thin at best. Legion is virtually non-existent, and separated from the fruit of its own labor. We're told it's a rogue AI, but are never shown anything in the present to foreshadow what Legion will eventually become. Another quibble: No one explains the Rev-9's role as an infiltrator and why it matters to Legion when its other Rev models are as unstealthy as one can get.

As the Rev-9, Gabriel Luna has little to do; Cameorn's villains were given time to hunt. Ginger is stalked and then killed; so are Todd and Lewis. There's build-up followed by the payoff. In Dark Fate, Luna doesn't stalk anyone. Like Meyers in Halloween 2 (1981) most of his kills are off-screen. The few on-screen fatalities are either over too quickly or executed Enter the Dragon-style. Meanwhile, the scraps of charm offered by Luna are conveyed in a vacuum, postmortem. I couldn't help but feel that most of his scenes were done in post.

Linda Hamilton is good as Sarah. Acting-wise, she's still got it, and has chances to act tough and emotional. None of it felt forced. Like Rooster Cogburn, she has true grit. As far as pulling a cork goes, we never see the woman get drunk despite her insistence to the contrary. Not that it matters. She has what it takes to carry her scenes. The main problem isn't her scenes at all, but Dani's. The two have to share the same screen, and the younger "star" simply doesn't have what it takes to carry a scene like Hamilton does (or Eddie Furlong for that matter). 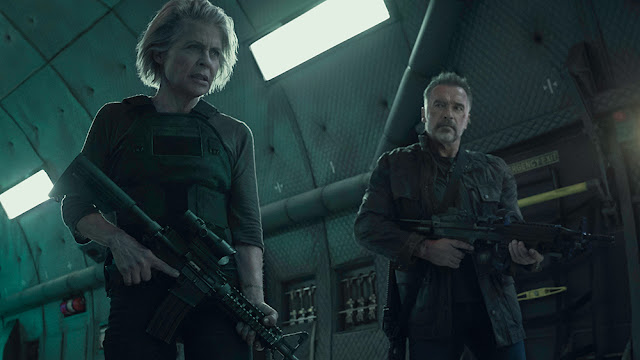 Arnold is good. Compared to T3, Salvation, and Genysis, I felt his presence in this movie to be closest to that of T2. I even enjoyed how they had him be initially portrayed as a killer only to come clean. Had sort of a Western vibe to it. And his dialogue worked better than some of Grace's. Not to take away from Mackenzie's performance, but some of her lines felt a little flat. And she doesn't have any jokes, either. Not that Reese did, but he had the best dialogue in the series; he didn't have all the answers, and sounded like a soldier from the future who had grown up in the ruins. Grace was tough, but lacked that wild-eyed trauma Biehn had in spades.

I also liked that Sarah was a wanted fugitive. Though I would have enjoyed her having more scenes to illustrate how this came to be. And if she was waxing terminators in broad daylight, what did she do with the bodies? If they were leftovers from a future that no longer exists, wouldn't their insertion and deletion in the present risk that future returning and combining with Legion's eventual genesis? There's a lot of potential here for sci-fi craziness, and seeing all of it swept under the rug in favor of what they actually gave us was pretty disheartening.

All in all, the script felt like it had too many ideas, torn between Dani and Sarah's stories. It also was too transparent. Too many flashbacks from Grace, who spells everything out in the present. I would have preferred unreliable flashbacks, like Sarah or Kyle's nightmares; or dialogue that left us to imagine what they were talking about. And this was largely left out. For being a self-confessed fan of Cameron's movies, Miller is, in a lot of respects, a poor student. Like McG, I felt that Miller tried his best to emulate the literal chase scenes Cameron used. Except for Cameron, his entire movies were chase scenes; they had momentum, tension, and suspense—something his imitators always fail to capture, including Miller. 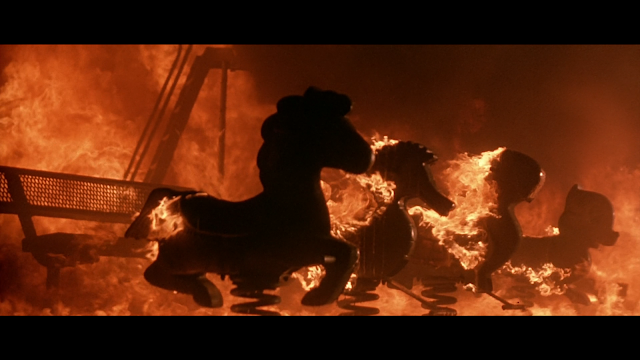 Did I hate this movie? No, but I felt like it could have been a lot better. The R rating is earned, but poorly. Yes, there's lots of swearing, guns and explosions. But the gore is largely computer-generated, taking away the heft Dyson's death had, or Ginger's. There's just no weight to the proceedings at all.

Lastly the final act. It goes on for too long (air, mid-air, dam, water, underwater). The Grace/Carl tag team took away a lot of its menace simply because they were beating the Rev-9. And why didn't the Rev-9 stay whole, to keep Grace from slicing it to pieces with the chain? Why didn't it disembowel her and Sarah like it did the disposable soldiers at the internment camp? Its design is questionable, allowing it to be divided and conquered. By the time they finish it off with the EMP from Grace's power supply, the thing is basically dead already—so weak, in fact, that Dani could body slam the poor thing. Imagine seeing Sarah or John do the same to their weakened adversaries. It wouldn't have happened because a wounded terminator is still a terminator.