September 27, 2019
I want to review The Dark Crystal: Age of Resistance (2019). However, given its size and dearth of content, I thought I might make it a weekly series for the next month or so. The point of this post will be to give my generalized impressions for the entire show. No spoilers, here; I'll save those for future posts.

The broadest compliment to AoR that I can pay is that it is generous. It has much to recommend, and little to discourage. This applies to fans of the 1982 original, and potential new viewers who have never seen a cult classic nearly forty years old. Depending on how avid these older fans are, they may be familiar with the extended lore the show is based off of, and will undoubtedly be curious in what directions the show's makers have taken it in. For fresh recruits, all of this will be new and there's a lot of it.

AoR doesn't simply introduce new characters; it introduces whole new places, complete with unique flora and fauna. However, these additions are centered around the two main players: the Skesis and the gelfing. First, the gelfing. In the original, all of the gelfing were dead save Kira and Jen, the history of their race reduced to a singular ruin. Here, the gelfing exist as seven tribes, each with their own distinct culture. They look, act and sound different—towards each other, their rival clans, and the spaces in which they live.

In the original, the sets were pretty to look at, but sometimes felt a little dormant. This would make sense, given the desolate nature of the Great Conjunction. Everything was nearing the end of its life cycle—the Skesis, the gelfing and the world. Not so, in AoR. Lush landscapes stretch far and wide, positively bustling with life and energy. There's a name for everything, including the world, itself—which is good, considering how much of the plot revolves around politics; names help the viewer follow the action, and there's a lot to keep track of. 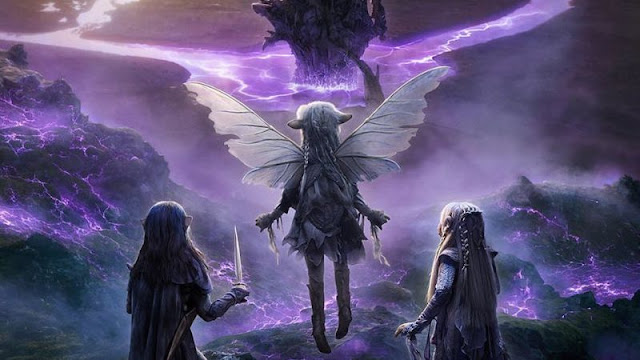 This action drives the show. Yes, Thra is younger and more diverse. However, this diversity would feel utterly cosmetic without personality and purpose. Gelfing-wise, there are princesses, palace guards, and grotto keepers; podlings are about the same as they were before—zany and carefree—but a new addition, Hup, is especially memorable; the Skesis court enjoys added functions as well. In short, everyone is occupied.

These occupations determine who these people are on paper. What really fleshes them out are their personalities. To this, the voice cast is a marvel—doubly so considering how large it is. Like the original movie, some characters have more than one voice actor. But it all sounds great. Not only do the splendid costumes help distinguish one Skesis or gelfing from the next; so do their voices, their dialogue.

Unlike the gelfing, many of the Skesis are returning characters. This includes the wily Chamberlain. Voiced by Simon Pegg, Chamberlain's chief weapon is his voice, and Pegg gives him one for the ages. With it, he whispers, teases, snarls and barks. He's not always successful, despite his wiles. When he fails, I cringe; when he succeeds, there's a little part of me that roots for him. He plays the vice character to a tee, with equal parts elan and ruthlessness.

This being said, his fellow Skesis are memorable, too. The Emperor, for example, effectively dies in bed, in 1982; here, he has a chance to actually rule. He speaks, he barks, he wheezes. He's still the Emperor, but feels like he has an actual personality the Chamberlain can manipulate. So do many of the other Skesis. Though technically present in 1982, many felt largely decorative. Now they have names and concerns; they say and do things that matter outside of a given scene. There's lasting consequences to nearly every conversation at the castle, and there are many. 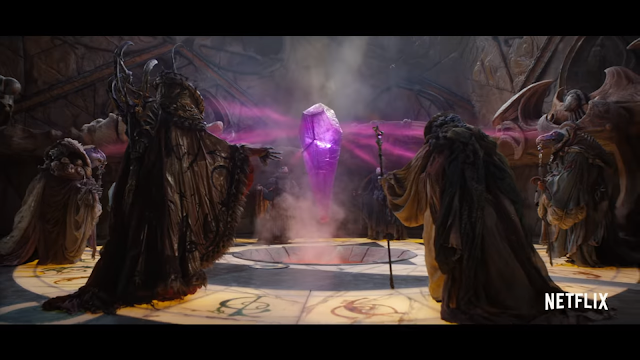 I love the Skeksis; they're outright deplorable and love it. They're gross, brutal, and rowdy in ways that really emphasize how self-adsorbed they are. It might seem cartoonish, except there's something strangely relatable about them. They want to hold onto what they have; they're afraid of death; they have vices. To be honest, their behavior doesn't seem too different than many powerful leaders: They exploit those around them; they complain and whine about those persons; they lie, cheat and steal from them and boast about it, later.

While the show wears its love for the Skesis on its sleeve, there is also a well-rounded cast of Good Guys. Aughra makes a return, for example. Nor is she simply here to advise the Hero, but has her own concerns, her own puzzles to solve. Like the Emperor, she has more to say and to do—not just a job, but a quest, and it all feels organic, interconnected. A main player's actions are often felt elsewhere on Thra. This might seem convenient, but we're dealing with important people—Lords of the Crystal, maudras, and generals; their actions carry weight. In turn, their deeds center around larger objects: Thra, itself; the castle of the Skesis, and the Crystal of Truth.

Apart from the sizable returning cast, there are copious new additions. This goes without saying for most if not all of the gelfing (unless some were simply in hiding in 1982—omitted from the narrative). However, it also applies to several of the Skesis ("Now there are only ten."). And, like their pre-established counterparts, these individuals are fully fleshed out. They have names, duties, and reputations; they affect the story as it plays out, from moment to moment. And here, some of the biggest surprises unfold.

The biggest delight is how this wide ensemble reacts and copes. Some stir the pot; some recoil from treachery while others dish it out—and not always how we've come to expect. Not all gelfing are good, and not all Skesis evil. Rest assured, the Skesis are plenty awful; but so are some of the gelfing. The degrees to which they are varies relative to their size and power. I think the Skesis' capacity for sheer wrong-doing is undoubtedly higher, but some of the biggest wrongs of all are made by gelfing simply struggling to survive in the shadow of the castle. 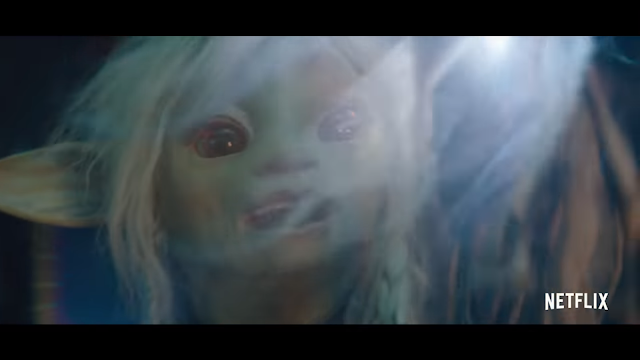 From a technical standpoint, the show is a wonder to behold. There are a few establishing shots that look out-of-place (especially in early episodes). However, many of the landscapes look beautifully photographed, on par with Lord of the Rings (2001-2003). There's a lot of them, too—snowy mountains, arid deserts, lush forests, and dark caverns. The ambidextrous narrative jumps around a bit, making use of all its vistas to keep things fresh from beginning to end.

And then there's the puppetry. I could spend thousands of words extolling how incredible everything looks, in that regard. Yes, there are obvious digital touch-ups, but nothing really distracts from the fact that we're seeing some of the handsomest puppets ever put to camera. Most of the digital work is applied to the Skeksis' mouths, which open when they talk, showcasing their wiggling tongues. Another example is when female gelfing fly. Probably the least touched-up are the podlings, but they're also the smallest, the most simple.

As for the traditional puppet work, the gelfing faces seem much improved over their 1982 counterparts. The eyes muscles move, the mouths curl and twist, and more. Sometimes, their faces are a little stiff, and yes, their eyes a little empty. But all the same, there's an element of cuteness to them that's very deliberate. As with real dolls, no matter how cute they are, a certain amount of uncanniness is inevitable. The real question is, does it distract from the story? Personally I wasn't bothered; there was simply too much going on to give it much thought. 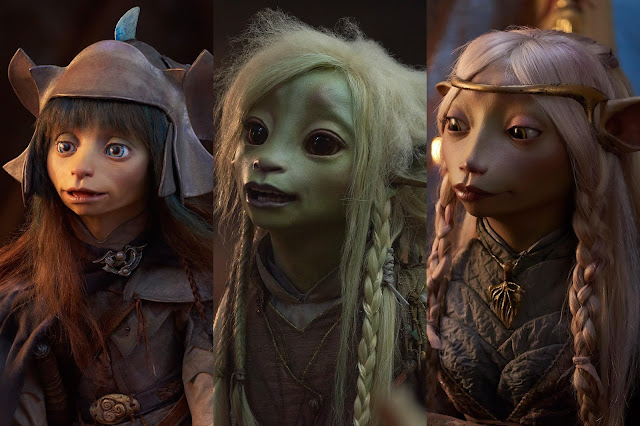 As for the content, itself—this isn't a children's show. For one, there's romance and gore unlike anything the original movie had, and the violence is brutal in ways Henson only flirted with in 1982. The story is also much more complex, featuring plans-within-plans, double-crosses, and family tragedies. There's also dozens of inside jokes and nods to the original movie (and also a couple other movies, if you pay attention).

All in all, AoR is a family affair—something everyone can watch and enjoy for different reasons. Smaller children might blank on some of the political complexities or familial drama, but they'll undoubtedly love Deet, her animal friends, and Hup. Personally, I loved AoR. From beginning to end, it engaged me. I did have minor complaints, but these were few and far between—nothing so egregious to discourage you from watching AoR yourself. It's every bit as good as the original. In some ways it's actually better.
***
About me: My name is Nick van der Waard and I'm a Gothic ludologist. I primarily write reviews, Gothic analyses, and interviews. Because my main body of work is relatively vast, I've compiled it into a single compendium where I not only list my favorite works, I also summarize them. Check it out, here!
I'm an artist and a writer. If you're interested my work and are curious about illustrated or written commissions, please refer to my website for more information. If you want to contact me about a guest article, please use this contact form or reach out to me on Discord (vanderWaardart#5394)!