September 13, 2019
To commemorate the end of of my Q & A series on "Alien: Ore," this final interview is with Ambrose Gardener, who played Clark Witchell. Happy Friday the 13th (with a full moon, no less)!

Nick: My name is Nicholas van der Waard. I have my MA in English Studies: the Gothic, and run a movie blog centered on Gothic horror, Nick’s Movie Insights. Joining me for this interview is Ambrose Gardener, who played Clark Witchell, in "Alien: Ore." Apart from being an actor, he also does video editing for short films, helps friends and other actors to create self-tape auditions, and is practicing musical scoring. 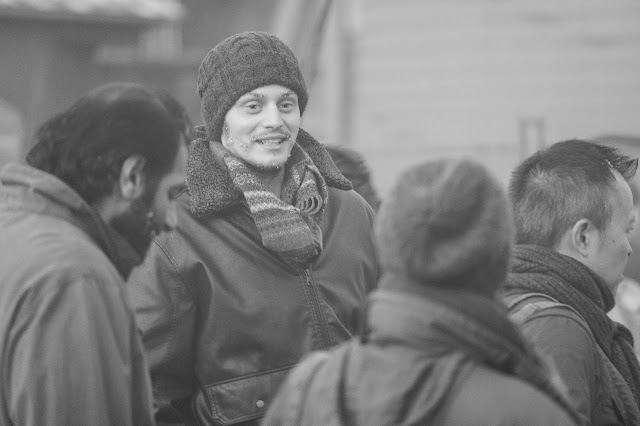 (to Ambrose): How long have you been acting? Can you tell me about some of your past experiences?

Ambrose: I made a conscious decision on January 1st, 2015 to really commit myself to acting. Everything that had happened up to that date was leading me towards it. Deep down I knew it was inevitable, was something I could not ignore and [that] it was just a matter of time. After lots of trial and error in my first year of commitment, I felt ready to present myself to an agent. One moment to the next, I found myself face to face with beautiful character-building challenges. For instance, recreating the single long take from The Shining—the scene leading up to Jack Nicholson getting knocked over the head with a bat and falling down the stairs: 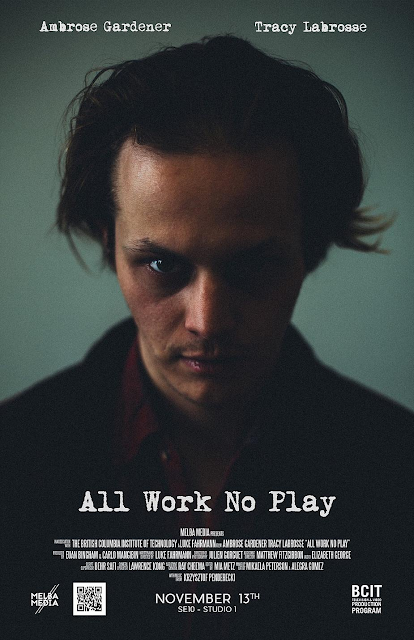 I will never forget it. While the crew was at lunch I sat on a chair in the middle of set and ran the scene over in my head; I questioned everything about it and began to wonder if Mr. Nicholson questioned the exact same things.

After my first TV appearance on iZombie (2018)— 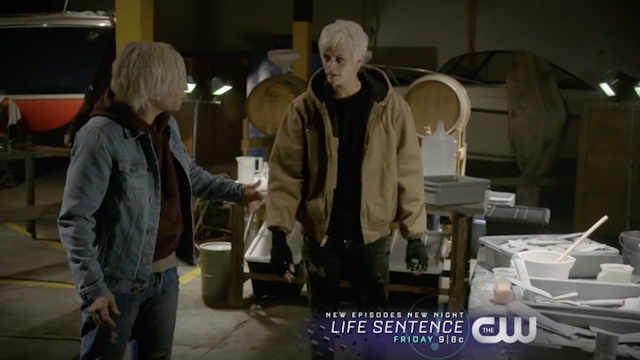 —flash forward a few months: I am now on the set of Project Blue Book (2019). I found out my friend had booked a role on the show as well and we'd be in the same scene together. Once on set, the kindest detective looking gentleman approached me and introduces himself as Aidan Gillen [editor's note: That's Littlefinger, for you GoT fans.] and shakes my hand. What a stud. He really opened my mind to another level of professionalism and authenticity that I hope to carry with me wherever I go. 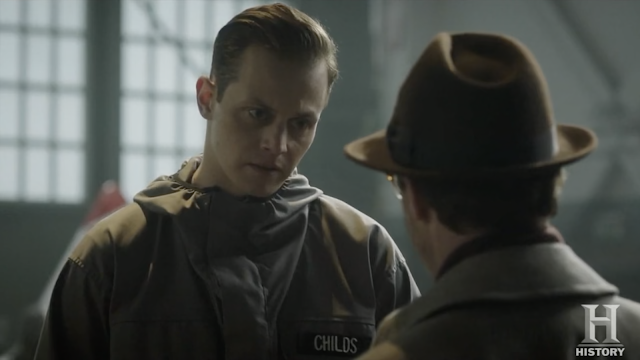 Nick: Do you have a favorite actor/actress that made you want to act? What are some of your favorite movies, in general?

Ambrose: The first time I watched Batman (1989), Jack Nicholson became an instant favorite (little did I know that he would become a big inspiration and [that] one day [I] would get the opportunity to step into his shoes). I [also] admire Anthony Hopkins for his stillness, Edward Norton for his rawness and Jim Carrey for his ability to express himself so freely in such a unique and authentic manner.

Ambrose: C'amaan, Nick, that's impossible! As a kid watching these films, I was in awe of the xenomorph. It didn't matter to me whether it was Scott or Cameron.

It's not fair to pit them against each other. They both worked very hard to create something that we will all remember. What's better—a sunset or a sunrise? If they both have a xenomorph involved chances are I'd enjoy both. [editor’s note: Funny that you ask. Take the major version of John William’s Binary Sunset—it sounds more akin to a sunrise (as a commentator notes). The fun part about the Gothic is its ability to contrast horrifying imagery against some really happy-sounding music—i.e., “The Gonk” as heard in George Romero's Dawn of the Dead (1978).]

Nick: What was your first Alien experience? Can you describe the first time you saw an Alien movie, and which one it was?

Ambrose: My father and I always watched movies together. One night, we were flipping through the channels and came across Alien (1979) on Channel 45. I was maybe eight or nine—who knows, but I was young (and I'll have you know it was my first introduction to the sci-fi genre). We came in right around the chest-bursting scene when John Hurt's character, Kane, sits down to eat with the crew. As Kane's ribs started breaking I remember my father changing the channel as it was too gruesome for someone my age. I begged him to change it back; I knew it wasn't real and was very intrigued to see what was happening. He skimmed back over Channel 45 and I got a glimpse of the close-up shot of the baby xeno before it scurried away. 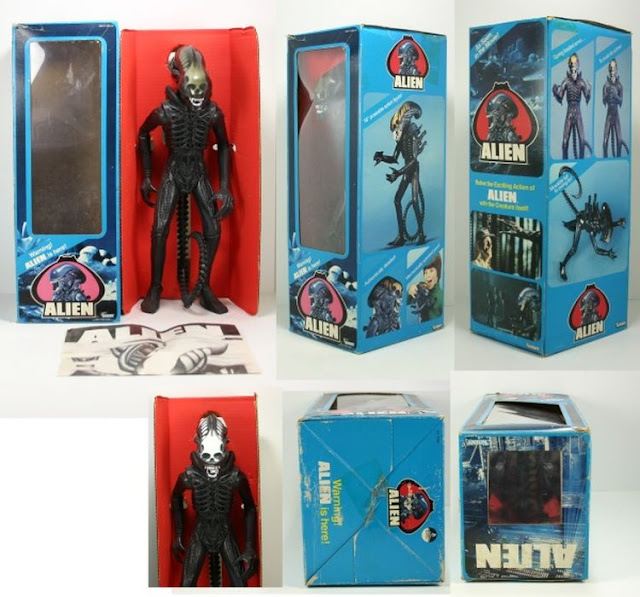 Children like horror, and sometimes horror is marketed to them. Take, for example, the vintage (1979), 18" Kenner action figure. As John Squires writes, "What’s interesting about Alien, however, is that despite the fact that kids weren’t permitted to watch it, they were oddly encouraged to play with it." The toy is amazing, but the commercial is just as good, albeit for all the wrong reasons.

Nick: I love the Alien franchise for its diversity of characters. Yes, it gives women the chance to be strong and overcome tremendous adversity. It also has an extensive chain of male roles. Some are heroes; some are victims. The alien doesn't discriminate.

As for Clark, I loved the inclusion of your character precisely because he complained. Typical of an Alien movie, the situation is pretty messed up and calls for a healthy amount of bitching. To that, Clark is right up there with Hudson, Parker and Fifield! He also felt different from them—less obnoxious or dim, and more of a skeptic. Did the script call for this, or was it more of a personal touch?

Ambrose: You're right, Clark falls into that character type. Never was a fan of the obnoxious characters, so I was happy to read in the character breakdown that they wanted Clark to be more of a skeptic, critic and dark/moody kinda guy. It was a lot of fun creating the reasoning behind why that was. 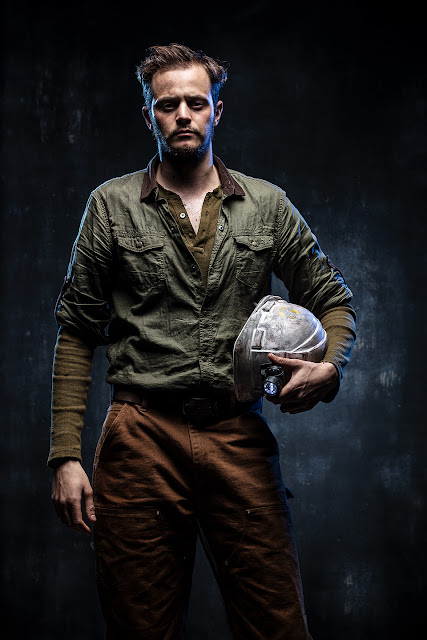 Nick: Did you model Clark after any of the aforementioned characters, or have you own ideas? If the latter was true, what inspired you to act the way you did?

Ambrose: It was clear what kind of character he was in relationship to the others, but I wanted to make it more specific. I saw him as an emotionally guarded young lad who happened to be born in unfortunate circumstances. I imagined that he lost his family not too long after being born and has trouble accepting their death: He feels responsible and cannot shake that burden.

I saw Clark as distant and cut off from the rest; the only real memories he has of his parents are the stories told to him by the other miners, including tall tales of what life was like—before he was born, before the mining colony. I pictured him growing up with a lot of resentment, and [with] the feeling of being stuck with zero possibility of change. I never saw Clark as family man. If he were to let someone in, he wouldn't know what to do if they were to abandon him. He still cares but doesn't quite know how to show it. Deep down he is a fragile soul looking for answers.


Nick: Even though Clark bites the dust partway through the movie, he still has quite a few lines. His dialogue tells a story and gives him something of a personality. Were there any lines of your own that you were allowed to include by the directors; or did they let you tweak pre-exisiting lines already in the script?

Ambrose: Everything was set in stone. That being said, my first course of action on any script is to honor the writing—to understand why it was written as such, what it does for the character, and how it moves the story forward. I never want to tweak or re-write my lines as I think it is disrespectful to the writer. If I am asked to play around with lines, then and only then will I [consider] it. On more "indie" sets I have been approached with the opportunity to tweak or re-write dialogue. However, on ["Alien: Ore"] we had a great writing team, allowing me to just lay into the story and trust what's happening. I liked that very much. [editor's note: In Alien, there was a script, but curiously much of the dialogue was improvised—a quality seldom attempted again in the franchise at large.]

Nick: Did you hear about the project beforehand and audition for it, or were you approached for the role?

Ambrose: Being approached for a role is always a lovely compliment, however I was one of many who discovered this gem on Vancouver Actor's Guide.

Nick: How did you feel when you heard about it, and when you got the job?

Ambrose: When I first came across the post I was, yes, a little skeptical. I thought it would be pretty cool to do something like that—if done right.

It lingered in the back of my mind. I started researching the companies and the people I would get to work with. When I realized how passionate, driven, and motivated these young professionals were, I knew it would be an honor to be considered for a role. It took me about a week before I decided to submit reading for a character. That being said, I think you can imagine how excited I was when offered the role: 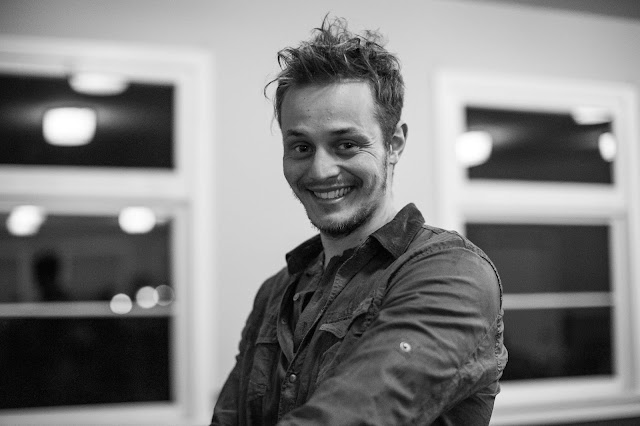 Ambrose, happy about something (courtesy of Greg Massie).

Nick: I had a chance recently to watch your audition tape for Clark. You call it a "selftape," in the video description. Is that an industry term?

Ambrose: Yeah, I mean you could say "self tape" or "audition tape" or even "video audition." I just like how it looks when it’s all one word.

Nick: You seemed pretty comfortable in the role, right off the bat. How did you feel after sending the tape off for consideration?

Ambrose: Thank you for saying that. I did feel very comfortable and I felt great after sending it in. Even if I didn't get the role, I enjoyed every second of creating the world and playing within it. After getting a peek at the [script], the level of professionalism just poured of the page and felt very natural to pick up. Having a great reader also helped (thanks Zach!).


Nick: Did you apply for other roles besides Clark; or, did you have your heart set on him, in particular?

Ambrose: I originally submitted for the role of Kolton. When the Spear sisters emailed me back, they asked if I could also read for Clark! So I did two selftapes. After reading the audition sides for Clark, I was over the moon and honored to have been asked to read for him.