Room for the Gothic in Hollow Knight: Silksong (TBA)

February 22, 2019
After watching the trailer for Team Cherry's Silksong, as well as a recent interview with the developers, themselves, I decided to do a response video of my own. The video clocks in at over an hour. So I wanted to provide an abridged version for people to read, here.

As a Gothic scholar, I wrote my thesis on two Metroidvania: Metroid (1986) and Hollow Knight (2017). I consider most Metroidvania to be Gothic. However, being a sequel can wildly effect a Gothic text's ability to horrify or terrify its audience. Ann Radcliffe chose to terrify hers; "Monk" Lewis chose to horrify his. These two devices generally work in tandem, and nearly any text will contain elements of either. Usually one is more predominant than the other, and this ratio can invert from sequel to sequel, author to author. Works from the same author can change, too. Ridley Scott has helped shape and reshape the Alien franchise as an ongoing narrative. In a dark, unfriendly universe, the characters, themes and monsters remain similar. 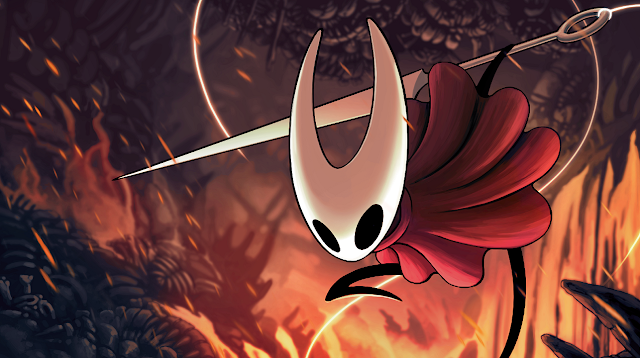 The same is true of the Hollow Knight universe. Hollow Knight, Team Cherry explains, was about descending into the depths; Silksong  will be about ascending the heights. If the setting isn't underground, can it be Gothic? I would say, "Absolutely!" Gothic stories promote big feelings. The space can be cramped or vast. Generally size and height don't matter, provided oppression is gleaned. The castles Udolpho and Otranto weren't underground; they were bare for all to see. The characters inside of or near them still felt uncomfortable. Partially exposed, their sinister histories remained cloaked in darkness and mist. No matter how high she climbs, Hornet will still be in the world of a game, one whose exotic ruins push the player into a dismal, albeit majestic past.

Is Hornet the new Knight? Hard to say. I'm not sure if this is a prequel of sorts. It could be a story telling how she eventually arrives at Hallownest; it could also be after Hollow Knight... except that game has multiple endings, and one where Hornet dies. Where and when she's captured, if she's captured, I'm not sure, nor can I say by whom. Nevertheless, the trailer shows her in a carriage. Such transportation often allowed bandits to spirit Gothic heroines away from safety and into hostile territory. They did not have the means to escape; Hornet clearly does. Does she escape, is she set loose? I'm not sure. What I can say for certain is that pace of the game looks different. Hornet is more agile than the Knight, can sail great distances using her silk threads. Basically she's Spider-woman. The movement and combat look faster-paced, similar to Alien (1979) versus Aliens (1986), Dead Space (2008) versus Dead Space 2 (2011), and so on. There's still room for horror and terror in any of those titles. The approach is simply recalibrated.

Silksong  will "recalibrate" Hollow Knight for an altogether new experience using old parts. The game is not only built on the Hallownest model; it expands on it. The areas they do show look similar but different. They show a lot. I feel like there's more, however—much more. Hollow Knight was a giant game, easily the largest Metroidvania ever. If Silksong is even bigger, that means the trailer is just the tip of the iceberg. Size doesn't matter in Metroidvania, though. The ability to traverse the world matters. The player must be able to progress across vastly different routes, with different items and abilities selected from the same, overall roster. That's the reason speedrunners play Super Metroid (1994) twenty-five years later. You can grab items, or skip them; change routes while skipping bosses; do the bosses in different orders, on different routes. A good Metroidvania will include these, and still have Gothic context: monsters, locations, and conflicts. The best Metroidvania manage to instill a sense of dread amid any elation progress provides.

There are some unavoidable conventions. Every Metroidvania has a "tutorial" and starter area. In Super Metroid, it's Ceres, Crateria and Brinstar. In Hollow Knight, it's the Forgotten Crossroads, Greenpath, and Fungal Wastes. Once Samus reaches Lower Brinstar, the game opens up; once the Knight is at the City of Tears, the game opens up. I doubt Silksong  will be any different. Another indicator of its potential size is the fact that it's not a DLC. I'm glad; the ability for the developers to add new areas to Hallownest was limited by how complete that world already was. Godhome and the torch to summon Grimm's troupe were pretty cryptic and far-removed.

As much as I'd like to see Hornet exploring Hallownest, that world was built for the Knight. Should Hornet become playable, she'd have to conform to the space as it already exists. Making a new game allows the developers to create a space that resembles Hallownest, but caters to Hornet's unique ability list. Making a new game allows for the introduction of other systems. For one, there's a new crafting system. I'm not sure on the exact details but am hoping for something on par with Alien: Isolation (2014) or Dark Souls (2011). There is a quest system, too. There are quest givers, and Team Cherry describe Hornet as a "fulfiller of wishes," a heroine for those oppressed ruin-dwellers. Castlevania 2: Simon's Quest (1987) leaps to mind. 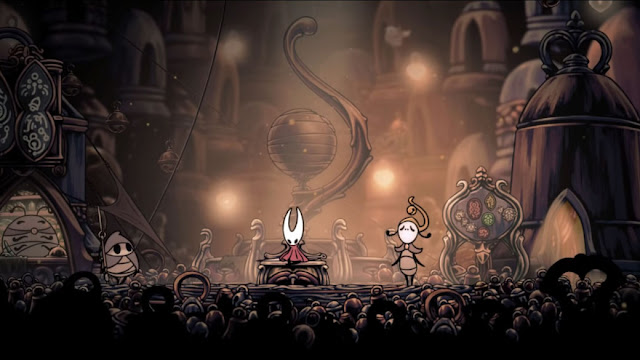 The world itself is jammed with monsters—150 and counting. The number doesn't matter so much as the feeling the hero experiences while inside the game. They should always feel under attack, surrounded by objects and symbols that confuse them. Reminders of death are constant. The line between the living and the dead, the distinction between friend and foe—these blur. There is no black-and-whiteness to Metroidvania, only a grey area for the player to investigate. In Super Metroid, the adult metroid is initially hostile and always violent. Ridley is preceded by draconian miniatures. Statues of the long-dead Chozo sit lifelessly with items in their claws; some even attack. Hallowest was equally ambiguous. I hope its larger Venus-twin is, as well.

One particular aspect that has me especially thrilled is Team Cherry's wish to "avoid recolors." I'm hoping the boss fights are equally diverse (and if the trailer is any indicator, they will be). In Hallownest, the Soul Master was a tiered fight, having multiple stages. So was the Radiance. Many of the bosses had one form, though, and a set, unwavering list of attack patterns. Gothic monsters are endless, with forms that evolve and change. They hunt from the shadows; exposed, they transform before the hero's eyes. What worked for the xenomorph also worked for the Nightmare, in Metroid Fusion (2002). The Radiance controlled the world around it through possession. Hopefully Hornet faces an equally occluded-but-omnipresent menace, one that continues to horrify mid-combat. DEMON. ATHETOS SAY, KILL.

Christopher Larkin, the composer for the original Hollow Knight, is returning. His music has an ethereal, breezy quality to it, one that granted Hallownest a spectral air on par with Radcliffe's illusory Udolpho. In her lifetime, Radcliffe became known as the Great Enchantress. While her works concealed murderers, they were meant to cast a spell over the reader, not scare them to death. I feel Larkin's music does that especially well. I'm glad to hear of his return. I'm curious to hear him evolve as a composer, and how different the music will sound this time around. Perhaps there will be nods to Michiru Yamane or Disasterpeace? I wouldn't mind.

Whatever the case, music plays an important role in Gothic tales. Udolpho was wreathed in mist, out from which music traveled. Lovecraft's "idiot god" beckoned Walter Gilman using faint, distant flutes. Team Cherry speaks of "a world ruled by silk and song." The Gothic usually combines different elements into a liminal narrative. I hear "silk" and think of silk roads along the Orient, of a princess captured by exotic bandits and stolen away into a distant land. Trapped inside a powerful castle, she must play detective to survive. Gothic heroines nowadays are like Amazons, monstrous. Laurie Strode, Ellen Ripley and Sarah Conor evolve into tougher versions of themselves. So does Samus or Hornet. Brains and brawn combine to help them survive. They don't need someone to rescue them. They just needs missles and magic, bombs and blades. 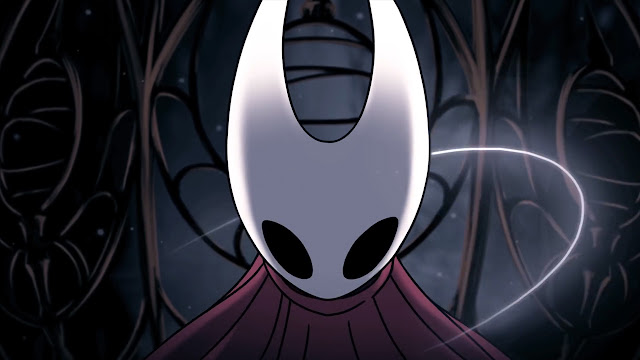 Team Cherry mentions a console launch, but no release date for the actual game. Hollow Knight was in development for two-and-a-half years before it released; the planned DLC released every six months or so, usually two-to-three months after being announced, itself. Hopefully Silksong  follows a similar model. The trailer looked pretty robust; built around the original game, the sequel should take less time to release. They won't have to start from scratch, but they do want to expand on what they already have. I suppose mid-to-late 2020 is an optimistic prediction, but I'll stand by it. I also predict it being every bit as Gothic a Metroidvania as Hollow Knight was, while still being its own adventure.