February 17, 2019
"It's alright to be a cat person, you know?" Much like Reservoir Dogs (1992), Bullet Head (2017) starts at the end of a heist. Dead behind the wheel, the driver crashes into a bulldozer. Stunned, but alive, the survivors climb free, carrying an iron safe full of cash—three desperate criminals fenced in a condemned lot with a giant, killer dog. If this sounds like the premise to a horror movie, it kind of is. However, this is a crime movie, the best of which are horrifying in spots: Mesrine (2008), A Gang Story (2011), Once Upon a Time in America (1984). Bullet Head, however, chooses to focus on dogs as much as people. This might sound weird on paper, but it works. 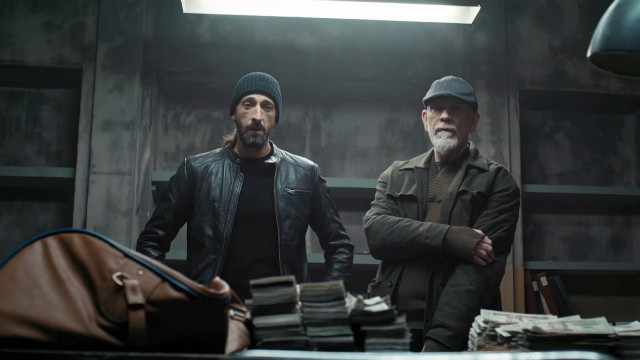 The men hole up. Waiting for their relief, they tell each other stories ("It's not like we have a paucity of time."). Each brings a streetwise legitimacy to his role. I buy the act. Malkovich has done this kind of thing in his sleep since The Killing Fields (1984). Adrien Brody sports a ponytail and four-day stubble, less like Wladyslaw Szpilman and more like Frank, in Michael Mann's Thief (1981). Rory Culkin is the third survivor, the newbie of the lot.

They exchange anecdotes; the dog prowls the complex. Each criminal has a dog story of sorts. These feature narration, but within flashbacks: Malkovich, his pet store score, wherein he ignores the puppies to steal a tropical fish; Brody, a heist involving truffles and a "truffle dog" that scares away a surly security guard; and finally the newbie and the crippled dog he nurses back to health. It's not exposition to the point that everything stops. I'm not lost, or impatient; I'm hooked. I sit and listen, but also watch. As the men spin their yarns, those in the present overlap visually with those in the past. From time to time, we're treated to a flashback told from the dog's point of view, without narration. We learn its past, how it was forced to fight. The film goes out of its way to engender sympathy with a man-made monster.

Initially Malkovich asks Brody if he's a cat or dog person. Brody replies that he likes cats, but isn't exactly a cat person; he feels differently about dogs now than in the past. I can relate. I like cats, not dogs. However, one of my favorite stories growing up is Where the Red Fern Grows (1961) by Wilson Rawls. I also remember the novel Shiloh (1991) by Phyllis Reynolds Naylor, and the movie Old Yeller (1957). Rory's story strikes as similar chord. I have to admit, dogs make ideal subjects in pet dramas. I can't imagine a cat starring in one.

Bullet Head is about criminals and their dogs. You have the good guys who just see them as animals, and sometimes use them on jobs. Then, there's the villain, who exploits dogs to get rich. None of this is preachy or overbearing. It's just part of the story. It all comes together neatly by letting the audience assemble the pieces. Much of the movie contains flashbacks, often with exposition. However, the individual moments are just that, individual: you can assemble them yourself. I appreciated the opportunity to participate. We're shown a sledgehammer tattoo on Rory's arm; then, his flashback reveals the crook's father to have killed the dog with a sledgehammer. It's something I didn't notice at first, largely because the movie doesn't force any connection to be made. It supplies the ingredients, only to wait for us to put two-and-two together.

The larger narrative unfolds; I'm never impatient, and find myself relating to characters I might otherwise not. That's the mark of a good crime drama: relatable cons. These aren't scumbags, but people with a hard lot. When the annoying junkie dies, I felt bad for him. Without realizing it, my expectations were subverted. The hero of the movie remembers his girlfriend. We think, "She's waiting for him." Malkovich tells Brody to get on a plane; maybe he should, but he can't. The con life is hard to let go. Turns out, she's five years gone. Once again, there's a dog thrown into the mix. When he decides to join her on the beach, she told him, he's to buy her a puppy. What could it symbolize? Commitment, new beginnings, fidelity—take your pick.

As the narrative progresses, the significance of early flashbacks changes. Some footage feels timeless, like a dream. Others can be placed, but alter our reaction through perspective. An early scene has the beast being electrocuted from behind a glass wall. Later, the flashback occurs behind the curtain; we see the beast, hooked up to a nearby circuit-breaker with jumper cables. The second point of view encourages a more sympathetic response. At the same time, the movie is linear. Despite morphing expectations, it presses on.

One scene involves the hero, searching for a dead man's keys. Drama is exchanged for tension. There's a slow creep through the structure, with lots of dark silhouettes and point-of-view, free-motion shots. He clutches a miniature crowbar, one used to break inside the building. A dinky Chekhov's Gun, it seems laughably small against the imagined beast. The corpse is gone; he follows the blood trail. Gothic tales often involve a "return,"  to an old crime scene, a hidden trauma. The blood trail leads the hero to a roomful of corpses—canine corpses. This is the root of the principal dog's suffering. From a dramatic standpoint, it's tragic in a curious sense: the hero, a crook, emphasizes more with the dogs than the other man, lying dead on the floor.

When the beast rises from the pile, bleeding but alive, the chase is on. Cultivated by years of abuse and neglect, the dog is massive, unstoppable. Through the embodiment of its own grisly precedent, it perpetrates future crimes. Consider Gothic tales and their "sick" castles, their beasts inside. What is the underlying cause? In this case, it's Banderas, the tyrant; if not for him, the dog would've had a very different life. 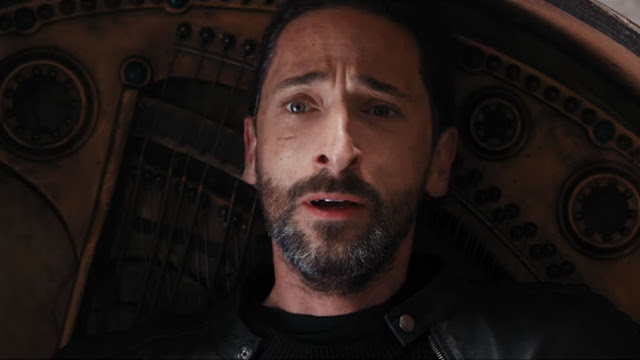 Brody runs through the labyrinth, harried into a cul du sac. Trapped, he spots a concert piano, its lid removed. Up-close, a bird's-eye-view shot spins and pulls away towards the ceiling. Brody must lie on the wires. All he has to do is not make a sound. This shot is well-crafted. By looking great, its tension is excellent. In a mad attempt to reach him, the dog smashes through the piano, becoming stuck under its heavy frame. Brody rolls free, can escape. The dog's whimpering inspires clemency. Brody hesitates, torn. In the end, mercy will out.

"We cool?" Brody asks, afterward. In response, the dog scampers off.

With the keys, Brody returns to Malkovich. The two make a run for it... until Banderas shows up. It's funny how severe he can look, without saying a word. On one hand, he's handsome; on the other, strangely intense. I half expected him to stop in front of them and ask, "Did they misbehave?" Instead, he shoots Malkovich. Brody books; Banderas follows, blasting away with a Tommy Gun. The stunt work is nice. Banderas has the keys to the place. Trapped, Brody stows himself under one of three canoes. Banderas prattles on (about dogs) while patiently shooting the canoes one at a time. Under the canoe, Brody spots a white rabbit, which leads him to safety—through a hole in the canoe and the side of a nearby wall.

The scene works as well as it does because it is paced correctly. The bit with the rabbit is odd; I assumed it was a opium dream, earlier, when Rory saw it. Turns out, the rabbit is real. Fair enough. However, the photography seemed strangely off, as if achieved in a last-minute re-shoot with hasty digital touch-ups in post. The effects are equally shoddy when the dog turns on Banderas, or when Brody plummets into the water. Bullets magically shoot past the submerged hero (a Hollywood visual trope I wish would go extinct). At least the predicaments were varied and creative.

It's not uncommon for dramas to maintain a constant tone. Here, the tone varies, from funny to dramatic to horrifying. The theme, of man's best friend, remains constant. The movie starts off in medias res. It has drama, little stories that segue into a grander horrific scheme. It succeeds on all fronts, despite its checkered facade. The glue holding all together? Dogs. The final shot is of Brody strolling on a beach, small puppy in tow. The visual failures of the penultimate scene are superseded by an ability to reshuffle the deck, and return to older subplots or themes. These, themselves, evolve or change; they progress. They tell a story that leads up to a satisfying conclusion made possible by careful narrative logistics, but also tension, drama, and occasional humor.  This isn't a Great Drama; its scope is small, but it works, and that's all that matters with something like this. You can sit down, watch it, and enjoy yourself. The plethora of disparate devices might seem crowded, but gel nicely. When something malfunctions—a rare event—the others pick up the slack.