December 17, 2018
David Bruckner's The Ritual (2017) is a movie about wrong-turns. Yes, it largely involves four men who get themselves increasingly lost while hiking in Sweden. This is undoubtedly a wrong-turn, but not the first. When four was five, two of the group, at the end of a guy's night out, decide to walk into a liquor store. There are misgivings: Luke is on a bender of sorts; the others want to go home to their wives and jobs. So Robert narrowly joins him inside, a go-between for Luke and the others, alienated by the former's incessant party antics...

Disclaimer: Before you proceed, I wholly recommend watching the movie first!

Inside, the two men convene, their hushed debate cut short when they spot the cashier. Beaten supine, she gawks wordlessly at them. Robert freezes; Luke takes cover, hearing the assailants return. Enter two junkies, armed and belligerent. They spot Robert and corner him, demanding all he has. Refusal to hand over his wedding ring nets him two healthy blows to the head, cracking his skull (the makeup effects, here, are excellent). The brains are out, the man is dead. 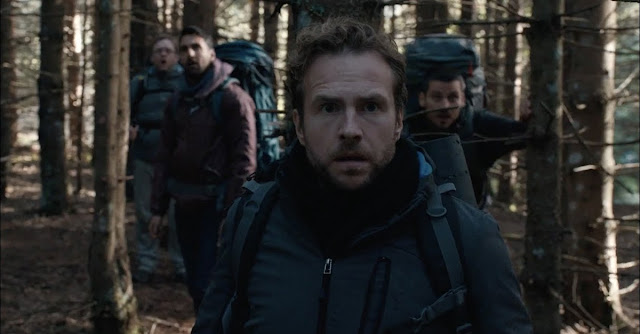 Cut to Sweden, six months later. The survivors pay their respects to Robert, his burial mound laden with relics. They pass around a flask, taking pulls of whiskey. It starts to rain. Forced to abandon their vigil, they press on, the lodge some eighteen hours away (on foot). They never make it. Instead, the loudmouth, Dom, trips and sprains his knee. To spare Dom some pain, the good-natured leader, Hutch, recommends a shortcut. He seems unperturbed by a trek through the local forest. Yet, the trees crowd our vision, too dark and spooky to contain anything remotely salubrious.

It begs the question, how restorative is a trial-by-fire? Gothic stories relay trauma on the home front as explored through a foreign, exotic landscape. For example, Monsieur St. Aubert, in The Mysteries of Udolpho (1794), is mysteriously prescribed a visit to an Italy infested with bandits; Victor, in Frankenstein (1818), wanders the wilderness under Mont Blanc, by which to combat his own, inner maladies. Such heroes bring their troubles with them—into forests, caves, and ruins that issue parallel challenges.

Traumatic prologues are common, in horror cinema. Such ailments are often treated with questionable medicine. The Descent (2005) features a traumatized heroine, Sarah, invited by her friend, Juno, for a trek into the wilderness—in America, far away from their homeland. For Luke, it's Sweden. In either case, the situation is one of total predicament. Displaced locales represent personal turmoil as external, often demonized. Such threats are considered relative to exported woes; the land, something older, or distanced by which to make the connection. Meanwhile, the heroes move through a claustrophobic double of their own world.

Surface inspections denote trouble in the vaguest of terms. Monsters, actual or analogous, lurk out of sight, underground or otherwise. Such exploratory ventures are, themselves, children of strife, the call of the void answered, but with blinders. Pent up rage compounds whilst leaders, like Hutch or Juno, embellish the trek as a much needed shot in the arm. They lead their wounded friends forward, blind to how delicate their group is, should trouble actually arise. When it does, their pluckiness gives way to madness; a simple hike becomes a death march. The path to recovery is waylaid, the hero chosen by natural selection. Like Ripley or Sarah, Luke is a survivor, then and now. They outpace those in charge, relaying a hidden strength cloaked in grief.

Luke and his group trek through the woods. Eventually they find a cabin, unhomely and derelict. On the second floor, they find a wicker man. It has no head, and antlers for hands. They study it for a time, visibly shaken. When they leave, they file out, one by one. Their voices attenuate, relegated to the background. The door closes, killing the light; the wicker man darkens to the strident thrum of frantic strings. The last shot of the creature displays a pair of hands, pushing it off the ground. 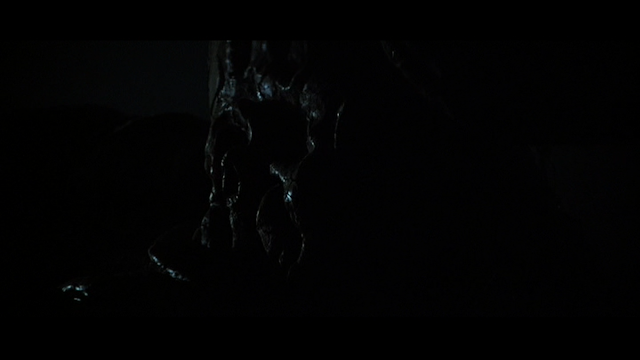 This scene replicates Alien (1979), when Dallas and Lambert pore over the Space Jockey. They circle it, ask questions, and pull away to chatter in the background. The camera fixes on the Jockey. Shadows mask its visage, forming a skull visible in darkness, not light. Exposed, the Jockey amounts to a heap of petrified bone, the ship housing it skeletal. A statue in a graveyard, death accretes, the necropolis crowded by a single mass of giant corpse flesh. By comparison, The Ritual offers something different—not a corpse, but a death idol. They find it abandoned, in a ruin. Made from arboreal ingredients, the smaller effigy hints at something larger.

Omens are found, and relay death through ambiguous means. Often, the sign is contested. The idol is enigmatic; the Jockey is both victim and destroyer. Likewise, both Sarah and Luke find a dead moose—hers on the ground, outside a cave; his, in the trees, dripping blood. In either case, something killed it. No small feat, as moose are powerful animals. Like statues, cadavers are mute, their own message imprecise. Regardless, the hero will take heed, suitably warned; the others will not, unable to recognize the poorly communicated threat. Meant to warn off weaker predators, men from civilized places qualify as such; they haven't seen what Luke has seen, or Sarah. They are strangers to the kill and the threat, but invaders nonetheless.

The men break into the cabin, and make themselves at home. Night falls. I waited anxiously for Grendel to appear, tearing them to bits. Instead, we hear only sounds. Dawn breaks to find the men sleepless and disturbed, their dreams invaded. Their cheerful bravado is shivered. Not Luke, though. What drives them mad, he cannot see. He has nightmares, albeit redacted ones. Instead, his grief-stricken mind armors him, the place where the beast should be a void that tramples tents and trees. He awakens outdoors, his chest bleeding from an invisible paw. He keeps his cool. The others do not. They delve deeper into the shady fen, heedless to his cries. 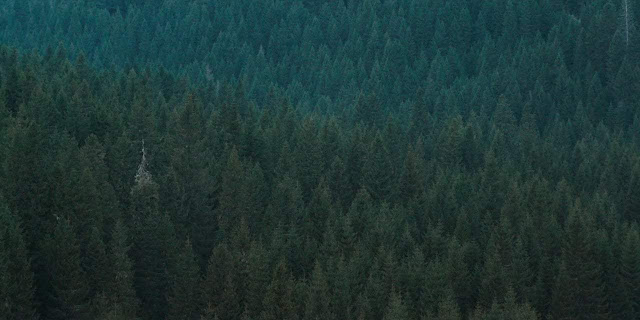 From here on out, the monster is teased with aplomb. We spy glimpses—a hand, a silhouette. The trees frustrate our eyes. The social friction harkens to William Golding's Lord of the Flies (1954). Dom, a heavyset man with glasses, is basically Piggy from that novel; dependent on civilization, he whines constantly for home. Towards the end of the film, Dom is sacrificed. Like Ralph from Golding's novel, Luke is on his own, but strong under duress. The men, however, do not kill each other. Instead, the beast is external, in the wild. Through a process of elimination, it chooses Luke—by virtue of inadvertent, telepathic resistance—to join its thong of isolated worshipers.

First, Hutch and Phil are killed, out in the forest. Luke and Dom make it to a cabin, this one occupied. By whom, we do not know. Inside, they are clubbed. When they wake, they are chained to a wall on either side of a dark, inhospitable room. Their captors are human. A harridan nears, showing her breast to Luke. Lo' and behold, a mark similar to his own! Without a mark, himself, Dom is dragged outside. The walls block our sight, but not our ears. The blows fall; he cries out in pain. Worse, though, are the endless cries he makes amid a strange "breathing" somewhere else in the house.

Peerlessly furtive, the film checks the urge to reveal too much. To name or shape the object of fear and awe is to defuse both. You need obscurity or idol go-betweens with which to displace the beast, allowing one's imagination to expand. However, the movie supplies a frugal interlocutor, the woman in the billfold miniature (a Gothic staple if ever there were). After thirty-odd years, she hasn't aged a day.

"What is it?" Luke asks, when the two are alone.

They are its worshipers, the "perks" of which include longer-than-natural lifespans. Luke eventually escapes. When he does, he enters a dark room from whence came the raspy chant. The camera work is superb. Shapes surround him, revealed to be the still-living mummies kept by the god as trophies(!). The bodies are still; then, they're not. They writhe and groan. Luke looks on in horror.  There's no dialogue in the moment, though. The scene is allowed to speak for itself.

When Luke burns them to ashes, the god is furious. Yet, it cannot martyr him; it craves submission. The paradox supplies Luke a chance to rebuke. Rebuke he does. Of course, his success lies in the folly of the god, whose fleshy sycophants spare Luke from the offset. Keeping a cache of plundered weapons (many of which are hopelessly anachronistic), he robs their stores to make a final stand. I enjoyed the scarcity of the rounds to his rifle, the black humor at him socking Granny in the eye, or his inability to communicate with his former captors:

Tremendous satisfaction lies in his eventual-but limited empowerment. Meanwhile, the god, mad with grief, "negotiates" with its members through wholesale slaughter. On a whim, it plucks out the blonde woman's eyes. Luke shoots it, only to be harried further into the glade. He and god square off for a final confrontation. The movie's greatest strength is progression, from hidden to shown. Sounds entice; men, plucked from their tents, are stolen away to a grisly death one hears, not sees. Forced to wait for a grand reveal, the worry remains: it might not pay off. Rest assured, it does. Exposed, the god looks majestic, its naked exhibit something of a final, grand persuasion meant to cow the stubborn. 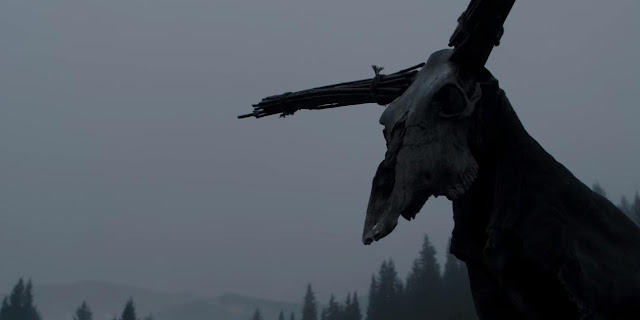 Though a gambit, the last act works from a visual standpoint. The visual effects could have been sub-par. Even Alien was guilty of that, at the end. Instead, Bruckner succeeds where Scott failed. The god looks the part. However, Luke is impervious. Up close, he fends it off, running free to escape the woods. The beast cannot follow, relegated to its home, a rotting fen. I thought of Old Ben, the aging bear Isaac looked upon, in Faulkner's fantastical Yoknapatawpha. The ancient forest that housed him was, in the end, little more than a shrinking pen, a prison.

All in all, The Ritual is nothing new. It is, however, done well. The visuals are fabulous. I especially enjoyed the flashbacks; revived in Luke's mind, they melded with the forest. Incongruous store shelves sink into the mossy earth, covered in leaves. The warping psyche manifests in a mutating landscape, much like Frodo, falling in Shelob's lair, but landing in Lothlorien. The Swedish glade deserves special praise, the stuff of nightmares. The performances are grand, as well, though especially Spall as Luke; his performance in Prometheus (2012) seems curiously remote compared to the deep-voiced penitent, here. Like Sean Harris and Logan Marshall-Green from that movie, Spall has demonstrated solid horror chops, The Ritual every bit as good as The Invitation (2014) and A Lonely Place to Die (2011).