December 08, 2018
Though relatively new compared to journeyman directors, Jeremy Saulnier is hardly a novice. It might seem otherwise; ten-plus years have seen him produce only four feature-length films. Three of them succeed; one does not. The focus of this review is not to attack the one that fails, but celebrate his earliest, Murder Party (2007). First, however, I'll need to explain my viewing history of Saulnier's canon, starting with Blue Ruin (2013) and leading up to Hold the Dark (2018). I want to explain how the latter misfired, encouraging me to sit down and watch Murder Party (2007). 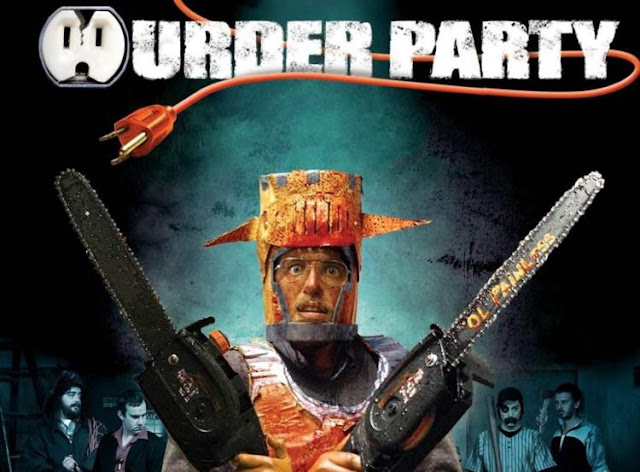 Jeremy Saulnier and Macon Blair—I stumbled upon Blue Ruin several years back, and immediately fell in love with both men; they operate in tandem, much of what they deliver working through a constant, healthy partnership. For example, the stark conclusion, of the suicidal revenge plot, is realized by a shrunken, speechless Blair (a directorial talent in his own right: I Don't Feel at Home in This World Anymore [2017] is one of my favorite films). I was hypnotized, and driven to watch more. This lead me to Green Room (2016), which I also loved. However, Blair's role was far less central, that time around. He almost felt underused in what was otherwise a solid venture.

It begs the question, how central is Blair to Saulnier's canon? To this, look no further than Saulnier's latest project, Hold the Dark, which barely features Blair at all. Is it a coincidence, then, that the movie is somewhat flat and lifeless? Yes, it contains much of the usual, trademark violence, but none of the humor Blair reciprocates. Then again, while Blue Ruin didn't require humor to excel, it revealed itself in steps, unfolding over time. There's a general premise, with nuance that mounts through a steady sequence of mishap and carnage. There's a lateral sense of perplexity watching Blair do one action after another. We have a basic idea, but not the complete picture. The lack of a total image maintains investment; the dramatic conclusion computes, allowing the confusion to fade. The hero remains active throughout, engaged in a quest I could relate to.

By comparison, Hold the Dark is oddly straightforward: a novelist, and student of wolves, receives a letter, penned by the wife of an absentee soldier, wherein she implores him, the recipient, to kill to the "wolves" that murdered their son. Yes, it unrolls, one murder at a time, but without twist or variation, drama or nuance. The surprises are all but spent, half-an-hour in. After that, it creeps along only to stop in the middle, as if the screenwriters suddenly fell asleep. It's cold and bleak. One can only sit and freeze. I understood Blair's implaccable quest, in Blue Ruin. The characters in Hold the Dark are too passive, like the protagonist; or, like the killers, too alien and detached. Everyone else? Fodder. The movie exists to be violent, to depict people as wolves, or the prey of such persons. There's no go-between, the division crude. 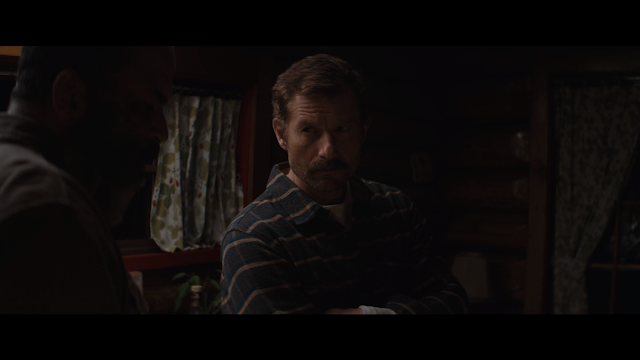 The sheriff is the worst example. The charismatic family man, such portrayals pay dividends later. During the central gun battle, one can recognize his stake in the conflict. It engenders investment. if only the screenwriters stuck to it! Instead, sheriff and novelist sally off into the wilderness, post-shootout. The latter along for the ride, the former is almost cheerful: despite all he has to lose, he remains unconvinced of the threat. It's as if the movie needed him to die to make it's point—he wasn't a wolf. Here, Saulnier steps in, pulling the strings to force the sheriff to act out of character. It doesn't strengthen the argument the film conveys; it makes it feel contrived: the novelist can't kill the wolves and honor the woman's request, because she and her husband are the wolves.

In the end, the sheriff is basically sacrificed. However, his death isn't a surprise; it's annoying because it belies how intelligent he seemed up to this point. Then, the killer and his girlfriend put on their wolf masks and have sex in a cave. Gravely injured, the novelist can only watch. The killers spare him and depart, leaving him to die, instead. He's rescued at the last moment, and visited by his estranged daughter in the hospital. Their reunion serves to resolve a conflict that was, itself, entirely one-sided, effectively an empty promise. When asked what happened, he has nothing much to impart, the reunion uneventful.

The novelist may as well be us, drained and hapless after a torturous exercise in forced argument; haggard, we remain unconvinced, disappointed. It's all predicament, zero conclusion. This extends to any reveal or event in the movie. Take, for example, the "mourning" of the dead son. Early on, the killer buries the coffin, marking it with his blood. At the end of the movie, he and his wife return to reclaim it, wearing their wolf masks. It all but demands explanation, only to deny us. Given how they brutalized the townsfolk, I'm not sure anyone shared their particular creed. There's no room for drama, here, because nothing is resolved, either. The mystic ritual never ends. Maybe it's a coping mechanism. The land is harsh, forcing wolves to spin their wheels for reasons known only to them. The problem is, I didn't care. 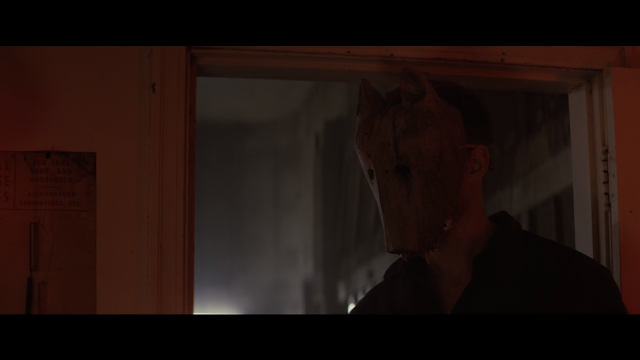 I could have. While not my favorite novel by any stretch, Cormac McCarthy's Child of God (1973) offers a similar, hopeless landscape, one occupied by a ghoulish pariah. The different is perspective. McCarthy lets us in; we learn how the antagonist feels. The novel ends with the death of the villain, whose body is donated to science. Cold, indifferent thinkers ponder over his corpse. They take it apart, scoop him into bags. Saulnier denies reprieve in any form. A lack of seminal death robs us the chance of thought-provoking dissection, the ability to ask big questions. Saulnier's preoccupation with the mask and the wolf dominate proceedings, simplifying them through exclusion—not of alternatives, even, but of a functioning interlocutor. It's not abstract, it's basic, with little to impart except violence. Even the most violent films—Gladiator (2000), The Wild Bunch (1969)—provide catharsis amid the slaughter. Dramatic elements can either infuse the carnage with a pathos or jouissance. Hold the Dark does neither.

The polar opposite of Hold the Dark, Murder Party exudes a spirit of enjoyment. It's brutal, but fun. Juvenilia can vary wildly in tone, and generally differs from latter-day works. For Saulnier, he brings an inherent wackiness to the fore. Yet, the self-aware delivery comes off as fresh and inventive. The character Macon, in the film, is played by Macon Blair, and several other characters share names with their real-life counterparts. Unleashed seemingly at random, there's always a moment to appreciate the carnage, or laugh at it. The humor is constant, but varied; at times dry as a bone, others outrageous. It's Kevin Smith with a better sense of pacing and a flair for Titus Andronicus (1594). Familiar with cinematic convention, Saulnier expertly subverts it—early on, in the middle, at the end. Similar to Marion Crane's demise far too soon, a surprise death in Act 1 defies audience expectation. Yet, imagine Psycho (1960) nowadays: would any other way be appropriate? Such movies break the rules to fashion their own.

The plot is minimal. On Halloween, a random man treads upon a derelict calling card. Left on the sidewalk, the invitation is elaborate, black. When opened, it promotes his own demise. Indifferent to the "hoax," he fashions some cardboard armor, bakes some pumpkin-raisin bread. Before setting forth, he feeds his cat, which rebukes him, immobile and silent. Defeated, the man retreats outdoors, searching for the address of the so-called "murder party." Eventually, he arrives bearing gifts. Much to his delayed chagrin, the party-goers want to kill him. 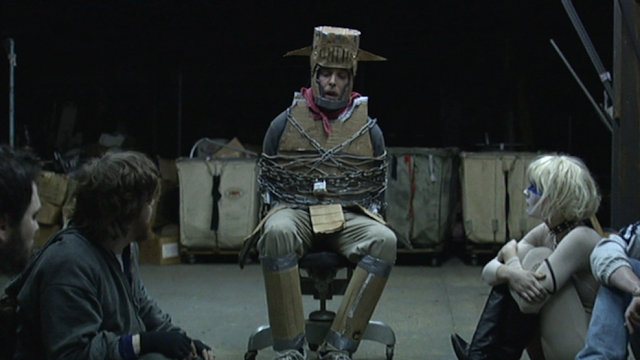 There's no extended pretense, like The Invitation (2014). Nor is the hero instantly drummed unconscious. Instead, the impending calamity allows for ample observation. These slayers are tragically inept, but oddly outspoken. Wishing to murder for the sake of art, desire belies outcome, their dialogue matter-of-fact, but off-kilter. Despite their frank approach, they fail to advertise; lacking context, the hero smiles, aloof. Luckily for him, the threat is half-baked. They can't even distract him long enough to ax him from behind. When that fails, they pounce and tie him to a chair. While they argue about what to do next, a less murderous member spies the pumpkin bread. Mid-bite, she opts, "Let's go to Cicero's." Then, she crumbles from an allergic reaction, braining herself with a car wheel. Out of Sight (1998) could hardly boast a more ignominious death.

Abashed, the would-be-killers stuff the corpse in a waist-height freezer. This accident foreshadows further mishap. No one is safe—the hero, but also the killers. This isn't Steven Kastrissios' The Horseman (2008); the hero isn't tied to a chair and tortured. He sits in silence, watching these odd persons fail at everything they do. Yes, they poorly imitate murder, but also art, expressed through murder. They're bad at everything. They're not without agendas of their own, either. These gradually surface. Blair loves Sky. Sky's a maniac. Paul, to win a grant from Alex; Alex, to kill Paul, stealing and selling the work of a dead artist. Bill sits quietly waiting to explode. It's a game of Clue replete with killers.

Things eventually explode. Paul is shot in the head by Alex, Blair sets himself on fire, and Bill kills Sky with an ax. The visuals are suitably over-the-top. The music is "serious," half-Goblins, four parts heavy metal. The excellent gore and mild slapstick evoke a younger Peter Jackson. The script has a good memory regarding the props, too (the chainsaw and electrical cord; the "acid"; the dog and bag of coke). Objects are introduced early on, their eventual fulfillment creative. After the initial meltdown, the hero escapes. Pursued by Bill, he runs to Cicero's aforementioned art exhibit: a gallery with live subjects posing as still life. Bill goes nuts and kills everyone, inside; an attendee comments on the aftermath as art, failing to realize the bloodshed as actual. When Cicero hears the murderous din through the door, he's frustrated by them having "started without him." 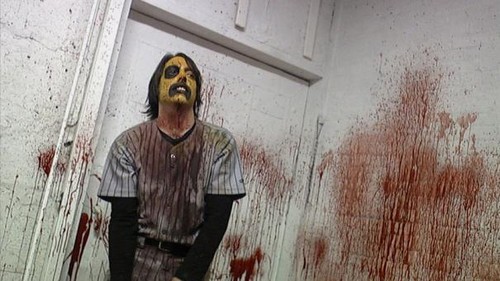 In the end, both parties are about art, traipsing between murder without pretense, and art mistaken for murder. The commentary is largely performative, a spoof of such debates while being one itself. Though capable of replicating the same bloody drama, the message goes beyond "life is frigid and pointless, driven by ritual and instinct." It doesn't suffer from pandemonium; it benefits, managing to comment on the art world all the while. The side plots and main arc operate in the periphery of a zany interplay between them and the chatty cast. It's not so obtuse to invite confusion, nor plain enough to frustrate. It unfolds organically. Supposedly the villain, Alex is replaced eventually by Bill, the quiet psychopath. The biggest shocker is how far things go to pot, once Bill is set loose.

Covered in blood, the hero stumbles home. This time, the cat obeys him, his autonomy confirmed. If that seems quaint, it's deliberate. Our hero is just an ordinary man thrust into a bizarre situation.