April 29, 2018
Here is part two, of my review for André Øvredal’s The Autopsy of Jane Doe (2016). Part one covered Scandinavian horror and the premise of the movie; part two shall cover the rest of the film, and analysis it more closely in terms of its Gothic themes.

Tommy and Son begin their examination. They collect data, and evidence; they snap polaroids and take notes. Oddities crop up: Jane’s ankles and wrists are smashed, but the skin isn’t broken or bruised. Her narrow waist size isn’t congenital. “Curious,” they say as they scribble these facts down. No external signs of trauma mar her flawless form. The only visual clue that this woman ever died are her eyes, which have clouded over, indicating she has been dead for some time. Something is rotten in Denmark. 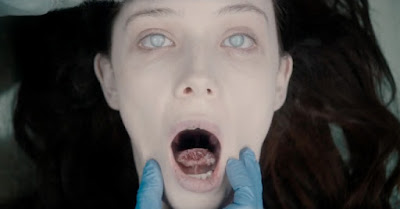 They open her up. Here, the gore effects are the perfect combination of camera trickery, gnarly sound effects, and generous makeup. Jane is catatonic, throughout. However, countless portrait shots demonstrate her lifeless response in being disturbed; cold as ice, her frozen eyes stare up at the viewer like Dracula at Jonathan Harker, feebly clutching his shovel. Meanwhile, Tommy’s knife slices her flesh; blood wells from the expert, indifferent incisions. Suddenly we cut to the autopsy table drain, positioned between her ankles; liquid blood flows into the depressed metal. It shouldn’t do that. Nor should Jane’s innards be so mutilated. Frankly they’re a mess. Yet, there’s no external damage. Her skin is immaculate, pristine.

A sense of dread mounts. Jane lies motionless; the camera fixates on her peerless visage as she infects her surroundings, haunting them. Much of this is felt, rather than seen. In an early scene, Austin goes looking for the cat (never a good idea, in horror movies); we see Jane reflected in mirrors, little more than a silhouette, out of focus. Nothing happens, but feels like it could, at any moment.

In another scene, Austin shows his curious girlfriend several of the corpses. In the morgue freezers, they lie on their slabs. Their faces and bodies are covered, draped in white, bloodied sheets (“Shotgun blasts will do that,” Tommy chuckles). Out from under the drab, bleached palls, we see their bare feet. Around the big toe of one cadaver, a “coma bell” is tied, a clever take on Chekhov's Gun: Later, Jane’s powers cause the morgue theater lights to explode. Everything is engulfed in total darkness. All we can do is listen with dread as the freezers open. The aforementioned bell jingles at a walking pace.

The movie excels at generating dread and terror. It saves the bare, exposed horror for Jane, frozen in ghoulish tableaux. It keeps its ghouls-in-motion cloaked in shadows, their presence intimated beyond a recently-opened door whose vacant space refuses to be occupied. When we actually saw the dead, they were still. In motion, we sense them in every way except sight, are forced to imagine them as locomotive. The effect is somehow worse. The shadows in the movie are incessantly pareidolic, stretching across the floor like grasping hands. There’s plenty of mist, too—the spectral sort that comes out of nowhere, giving the movie its hellish, spectral atmosphere. Everything is lit to absolute perfection, and more than once, I found myself beholding the Resident Evil (2002) movie that never was.

When things get too odd, Tommy wisely suggests “Let’s get the fuck outta here.” The duo make a break for it. No exit reveals itself; the phones are dead and the elevator’s busted; and a fallen tree blocks the emergency exit. They’re trapped like rats in a maze, except now that maze has a cat.

For the rest of the run-time, Tommy is repeatedly injured, like an aging bull repeatedly speared by the matador before it delivers the final, killing blow. Frustrated, he and Austin return to the autopsy theater. Incensed, they try to burn Jane; everything burns but Jane. Trapped, they put out the flames and decide to continue the examination. Maybe they can find out how she died (as though this will help them get out of their predicament). Her narrow waist suggests a corset. Her injuries suggest methods of repeated torture. She was a Salem witch, or so they think. 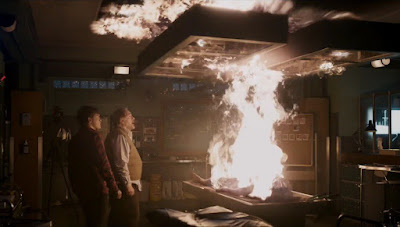 “Except there were no witches,” Tommy insists. “Just scared girls.” Instead, Jane is effectively a composite echo of the murdered girls, the entirety of their horrible murders embodied in a copy of the act, itself. Real or not, her alien affect warps everything around her. Her undead testament constitutes a feeling that haunts us, making us freeze because we know not to run or stand our ground.

Tommy has his own ideas. What if Jane was literally made into a witch? Realizing this, he mounts a desperate bid, agreeing to do whatever the witch wants, provided she spare his son. Faustian bargains are always a bad idea. Jane makes this point by invading him. She transfuses her internal injuries, making Tommy’s joints snap like twigs. As he goes blind and his lungs turn to ashes, Tommy collapses, dying in his son’s arms. Afterward, the orphaned son is lead astray by a distant voice. Like the call of a siren, it lures him to the exit. All seems well, until it starts singing Stuart Hamblen. It’s a mimic! Alarmed, the son falls backward, tipping over the rail and plummeting to his doom, much like the end of a very bad dream.

The movie concludes much how it started: with the sheriff standing amid a wake of dead bodies. The lab is a mess and the coroners are dead, but the freezer doors are closed (apparently the corpses never left them). It was all in the coroners’ heads, courtesy of Jane Doe. Her eyes stare up at the ceiling much as they have for the entire picture… except the eyes have changed from a ghostly grey to a solid, healthy brown. Apparently in too foul a mood to notice, the disgruntled lawman sends Jane one county over. During the ambulance ride, the camera pans over Jane, lying on a stretcher. She’s wearing less of a Mona Lisa smile and more of a smirk.

The camera stops at her feet. Around one toe we see the coma bell, neatly tied. Right after the movie fades to black, we hear it jingle one last time...

Jane Doe shows how our minds respond to fear as something disseminated through the media, making us see things that aren’t there. In doing so, she becomes her own viral force, neither alive nor dead. Inauthentic, impossible, and distanced from any obvious source, she still affects us. She reaches from outside our minds, spreading like madness, itself. Jane kills no one, in the movie. Tommy and Austin kill themselves and others based on what they think they see. Their actions extend through a relic that symbolizes and intimates torture and death, a self-fulfilling prophecy of both.

Everything feels alien—not because Jane is alive, but because she might be alive. When our senses can’t tell the difference, she pervades our minds, and our triggered imaginations transform our real surroundings into a spectral maze, one that’s hostile for the characters on-screen—not for us. We can safely explore it, experiencing the  otherworldly sensations without fear of actual harm from them: monsters and ghosts; taboos, and intrusive thoughts. In plunging down this rabbit hole, we can learn a little more about ourselves—namely how our minds work in response to fear as a byproduct of echoed, faulty perception. Embodied in the media, such illusions initially materialize as monsters, and then of movies of monsters, and so on. And as always, these monsters remain ambiguous. Nothing about them is certain. They feel alien, but familiar to us, at the same time. We’re drawn towards the outwardly hideous and profane—repulsed, but lured.

The cyclical nature of Jane’s imagination-fueled carnage suggests a never-ending circuit, driven by imaginary forces intimating threats hidden behind the media, itself. It becomes its own force, once that haunts us. We can’t escape how we see the world, as it is represented in the media. So we better acclimate ourselves, like a Norseman to the cold. 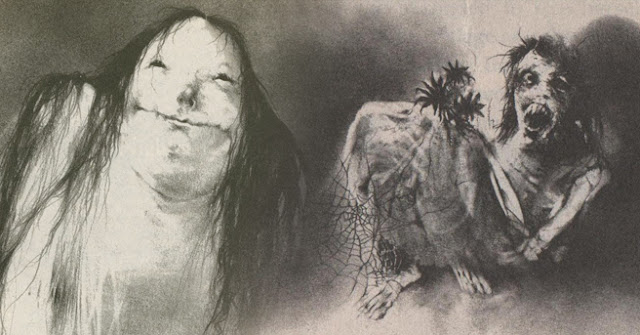 Side-note: Evidently Øvredal has been slated to direct an adaptation of Scary Stories to Tell in the Dark (1981). As this was one of the most heavily-banned children's books of the 1990s, largely due to Stephen Gammell's terrific art, I am very pleased that none other than Guillermo del Toro is pushing the project forward; maybe with his recent Oscar wins, it'll finally happen, and Øvredal will get another chance to scare us out of our minds. I can't wait.