April 29, 2018
I’ve had a chance to sit down and watch three new horror films: André Øvredal’s The Autopsy of Jane Doe (2016), Paco Plaza’s Veronica (2017), and Alex Garland’s Annihilation (2018). I want to review each. For now, I’ll start with The Autopsy of Jane Doe, which I’ve divided up into two sections. Part one will cover Scandinavian horror and the premise of the movie; part two shall cover the rest of the film, and analyze it more closely in terms of its Gothic themes.

Seeing as Øvredal is a Norwegian director making an American movie, I wanted to talk a little about Norwegian horror movies. Simply put, Norway’s a good source for horror. Even if the movie in question isn’t horror, per se, you can still feel the affecting chill in the snow-blinding landscape, itself. Just watch Hans Petter Moland’s crime thriller, Kraftidioten (2014); or even an American movie like The Thing (1982), where Carpenter’s unhappy Norwegians run around, blowing themselves up in the unforgiving Antarctic snowscape.

In that film, the American hero MacReady readily confuses the Norge helicopter pilots, calling them “crazy Swedes.” To be fair, Norway and Sweden sit right next to each other as part of three kingdoms, the other being Denmark. Together, they make up Peninsular Scandinavia, which can extend to Finland and Iceland. No matter how you slice it, Scandinavian exports are reliably frigid. Consider Jalmari Helander’s Rare Exports (2010), Tomas Alfredson’s Let the Right One In (2008), and Niels Arden Oplev and Daniel Alfredson’s Millennium trilogy (2009-2011) adapted from Stieg Larsson’s novels of the same name. All Swedish, all chilly and bleak.

Even before I had seen these, I had watched American movies like Sam Mendes’ Road to Perdition or Stanley Kubrick’s The Shining (1980) and thought to myself, how hypnotizing precipitation is. It saps like the cold hand of death, driving you mad. Imagine, though, if that’s where you lived. Directors from the Nordic kingdoms present their native weather as it is, but aren’t afraid to attach mystical or horrific qualities to it. It permeates their movies. Something about the cold, bleak wilderness they bring to the screen feels alien—the kind of otherworldly chill Lovecraft lamented in his only novel, At the Mountains of Madness (1931). This sensation isn’t unique to the Nords, natively. When Shakespeare wrote Hamlet, the earliest lines include two guards complaining about the cold, wherein one grumbles, “For this relief much thanks: 'tis bitter cold” (1.1.9).  Leave it to the Bard to exotify the Danish landscape, stuffing it with ghosts and visions like some kind of crystalline mirage.

There needn’t be actual spectres, though. When Quentin Tarantino made The Hateful Eight (2016), the cabin in that movie is surrounded by the cold. Tarantino also borrows liberally from Ennio Morricone’s score, written for Carpenter’s The Thing. In this horror/Western, even the cold is pastiche, exported back and forth much how the Spaghetti Westerns peddled Mexico from Italy back to America. But in Scandinavia, everything is made on one’s home turf; it feels genuine because the people in these movies are at home in such a forbidding place. Just watch Roar Uthaug’s The Wave (2011) or Escape (2012). For the people in these movies, the cold is just another part of their lives. I live in Michigan and gripe about the leaves in the fall, or snow in winter. Compared to Scandinavia onscreen, I find myself uttering the mantra, “There’s no place like home.” We watch movies to transport ourselves somewhere else through characters we can relate to. At the same time, we want that telltale feeling of something alien. What conveys that better than the cold?

If you want some good examples of straight-up Scandinavian horror movies, consider Uthaug’s Cold Prey (2006). Cold Prey 2 (2008) was handled by a different director, another Norwegian director by the name of Mats Stenberg. I’ll be the first to admit that sequels for numerically-sequenced horror franchises generally don’t fare so well when the original director is replaced by someone else. However, even as a total unknown, Stenberg did an excellent job with the material; it wasn’t original, but he generated a good mixture of fun and suspense in what could have been a sub-par exercise in unwanted horror sequels. He certainly did a better job than Jon Harris, who stepped in to direct The Descent 2 (2009). As much as I enjoyed that movie, it paled in comparison to the original. Directed by horror (and Game of Thrones) veteran, Neil Marshall, The Descent (2005) was a well-made, surprise horror flick, as was Marshall’s solid werewolf flick, Dog Soldiers (2002). None of them are Norwegian exports, though Centurion (2010) tried to channel that otherworldly mystique into the chilly Pictic landscape (not to start a tangent, here, but Marshall also did work recently on the recent Netflix miniseries, Lost in Space [2018], which I’ll have to review, at some point).

Enough about Marshall, let’s move on to The Autopsy of Jane Doe. The movie is technically American, but directed by Øvredal, a foreigner who brings a little bit of home with him. It may be a rote exercise, but he knows the material. I wasn’t familiar with his other work, before this, having only heard of Trollhunter (2010). Here, he piques my interest. Jane Doe is solid Gothic horror. 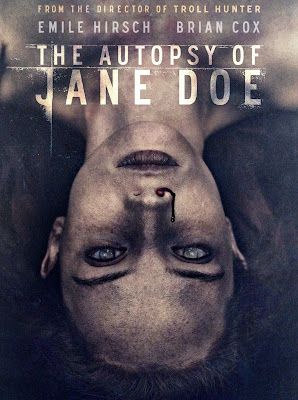 Jane Doe inhabits a very ordinary setting—insofar as a mortuary can be considered normal. Yes, nearly the entire movie is set in a morgue (adhering to Aristotle's unity of place). This one is strewn with curious relics, too: polaroid cameras, blackboards written on with white chalk; an AM/FM radio that wouldn’t sound out of place in a Silent Hill (1999) videogame, crackling somewhat ominously as voice inside the speaker croons Stuart Hamblen’s “Open up Your Heart” (1953). Oh, how horror movies love their grisly puns.

Compared to Øvredal’s homeland from a meteorological standpoint, Jane Doe is pure, unadulterated American. The land is green, fresh and warm. Nary a snowflake in sight. The movie starts with a throng of county cops, swarming over a homestead. Inside, they sift through the carnage of an especially heinous, domestic crime scene. Regular folks are strewn about pel mell, like chess pieces to a very puzzling match. An enigma lingers in the basement, almost waiting to be found: the body of a young woman. Lily-white and nude, she extends from the earth, partially excavated, almost grave-robbed.

And yet, herein lies the rub: she is utterly spotless; swallowed by the thick, dark earth, not a speck of it blemishes her immaculate skin. I found myself recalling Alexander Mackendrick’s The Man in the White Suit (1951) except, instead of Alec Guiness’ seemingly-magic white suit being unable to stain, we’ve presented with the pearly epidermis of a comely cadaver. Same difference. In any case, the frustrated sheriff needs explain what happened, to the press. So, he sends Jane Doe to the local coroner, Tommy, to determine COD (cause of death). Tommy and his son, Austin, run an antiquated establishment, dark and labyrinthine. It might seem alien to us, but both are at home among the dead bodies. Like the cold, evidently you can get used to corpses if you’re around them long enough (or in Austin’s case, raised around them).

Fiscally, Jane Doe is modest in scope. Virtually everything is shot inside the morgue. Most of the scenes are with Jane and the coroners. There is one brief scene with Austin’s girlfriend early on. She wants to go out on a date; he postpones it to help his dad with the dead woman, lying on the slab (nothing like a little necrophilic father-son bonding to frustrate true love). The acting is solid, throughout. Brian Cox is a champion character actor, one able to cram singularity levels of wit or humor into a single glance or bark; he could play this role blindfolded. Emile Hirsch is inoffensive and bland, proving himself a capable dunce as Austin.

The true star of the show, however, is Jane, herself, played by Olwen Catherine Kelly. This might sound odd, given that Jane Doe is dead. She merely lies on the table, bare and exposed for all to see (this movie is, in more ways than one, the life study of a dead woman). Still, Olwen proves an excellent model. Sure, much of her otherworldly affect is supplied through superb lighting and makeup, but you still need someone to lie still and channel it all. You need that perfect Mona Lisa smile. Olwen has it, in spades.

She’s strangely nubile for a corpse dug out of the ground, too, sporting a body worthy of a professional model. The camera doesn’t shy away from displaying it, lying supine, in the nude, on the metal examination label. It has to be cold, but Olwen never budges, blinks or stirs. Considering she’s onscreen for nearly the entire movie this is pretty impressive. I felt the same chill watching her as I did when drawing nude models, in college. Back then, they had a small heater to warm their bodies during the session; Jane doesn’t appear to. Then again, one can shoot anything to look cold, with the right color palate. Jane looks as cold as ice, but never once shivers. That’s what matters. She’s outwardly beautiful, but wholly alien, and her blind stare isn’t quite as blank as it should be.