Sitting down to watch Army of Darkness (1992) for the umpteenth time, I found myself somewhat perplexed: On one hand, this was a family favorite; I'd grown up with this movie. Watching it this time, I found myself unable to enjoy it in quite the same way. It's certainly quotable—even funny in spots, if only for the visual gags. But the idiocy of the hero, Ash, was impossible to ignore, and not always for the better. He lampoons the heroic tale, but does nothing to abate its sexist blueprint. My blog explores horror, but also sex, metal and videogames; this article explores some of these themes in Evil Dead 3.

The first Evil Dead (1982) is a Gothic classic; its effects are crude but effective, and its hero actually suffers. The second movie is largely tongue-in-cheek, slapstick. Army of Darkness is Raimi at his most Romantic, and sexist; he hurls Ash back into the past, where his wildest, manliest dreams come true. A tale of reaffirmed hubris, its dreamlike material sends our hero into an increasingly delusional state. 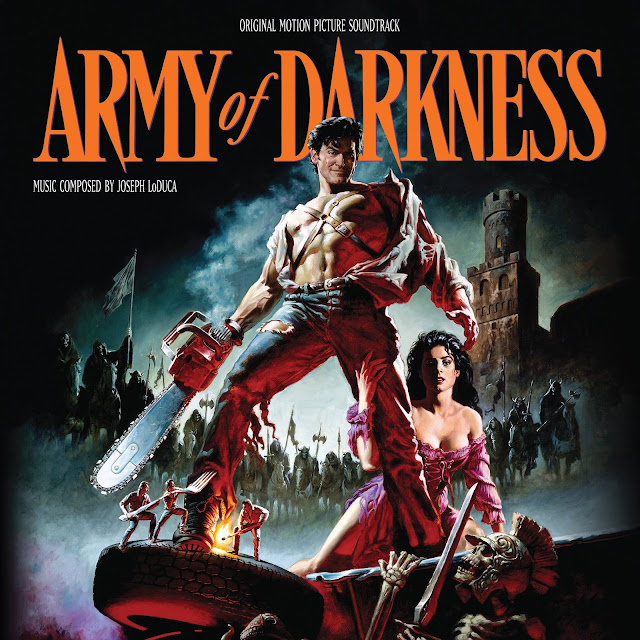 Byronic antiheros like Don Juan were intentionally excessive. A parody of popular heroic tropes, they became easily parodied themselves: sullen, self-absorbed, over-the-top. This description fits Ash perfectly. He smiles at us from the cover poster, too self-aware and indulgent to be genuine. Like the movie, he's bold, gallant, and intentionally dumb.

Ashley Williams: the ordinary man who wants to be king. The actual king calls him a buffoon, and rightly so. Ash ain't king material. A good few chuckles can be had when he gives it a shot; these same jokes can be embraced, reinforcing harmful positions: While a king can be mocked, he remains beyond reproach. Though unfit for the position, Ash knows he is also beyond reproach, and quickly becomes obnoxious.

Army of Darkness is sexist at heart. War is the province of man, and Ash can only be challenged by his medieval counterpart, the skeleton king. Virtually identical, these two rivals are divided by an arbitrary notion: the Necromonicon. They fight over the book and, more to the point, the girl. Yet, when the battle is won, she is forgotten. Ash saves the past, and returns to the present, full of himself.

The narrative plays out like a Quixotic dream. I can't forgive it, though, because it never stops (see Puck's closing speech for A Midsummer Night's Dream, "If we spirits have offended..."). During the dream, the skeleton king is repulsively lecherous. But Raimi fails to even mildly condemn Ash's own manipulative behavior ("That's just what we call pillow-talk, baby!"). This is, in my opinion, the movie's greatest flaw. Yes, it pokes fun at the tired tropes of the mythical hero through a Beowulf-level performance. It also reinforces them in the present—by creating a privileged, sexist idiot for the audience to rally behind. 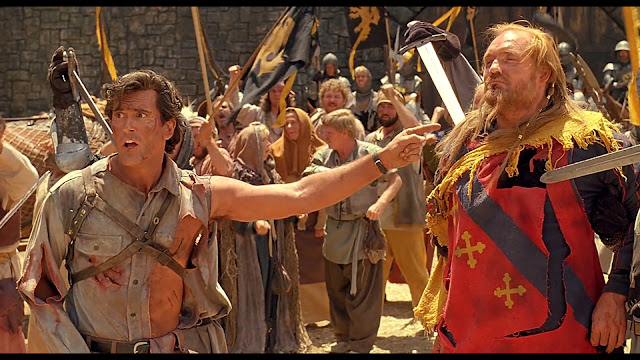 Don't mistake me. For the first 20 minutes, I sympathize with Ash. He shows up out of the blue, and is antagonized for being, quite literally, in the wrong place at the wrong time. Then, he begins acting like a total pig. When Sheila offers Ash a blanket, he insults her repeatedly. She slaps him, only to be pursued and embraced by Ash. From there, he proposes in the most anachronistic way possible: "Give me some sugar, baby." She yields, because of course she does, and they kiss; the music swells to accommodate them.

While this outcome highlights the absurdity of the format, it doesn't change the fact that Ash's behavior is reinforced by the script. In it, there are two kinds of women: hags, and damsels-in-distress. The former need bullets; the latter need protection—even if that protector is, well, a total moron. That's the joke, and clearly Bruce Campbell knows it. He's perfectly comfortable assassinating the character who made him famous. The outcome? A hero that's more misogynistic than ever. Let's not forget that he abuses Sheila for being "primitive" while making himself out to be superior to and expecting sex from her.

This owes itself in part to the movie's portrayal of women. Female subservience might seem typical in a male-authored medieval tale; Sheila is so submissive it hurts. For her, Ash is the Chosen One; it's only when he strays from this vision that she calls him a coward. In other words, the movie is too busy poking fun of the Romance to allow for candid women. She literally can't refuse him, but she can't have him, either.

This remains true even when the skeleton king turns Sheila into a hag. Ash continues to mock and abuse Sheila ("Honey, you got real ugly."). She doesn't rise above his petty insults—that he, the Chosen One, thinks she's gross; she's reduced to a jilted lover, unable to see Ash for what he really is: manipulative and entitled. After the battle, Sheila returns to her former self. Ash leaves her behind, anyways, choosing to resurrect his dead wife Linda instead by returning to the present before her death at the cabin. 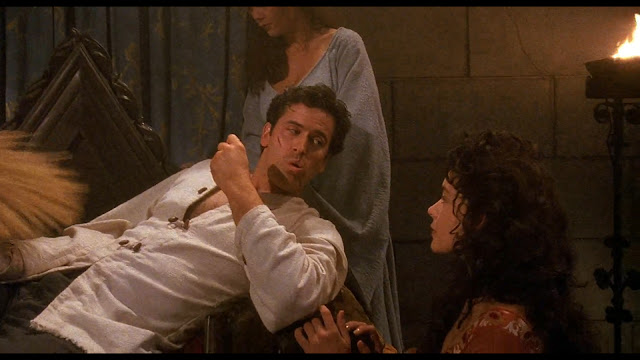 From a feminist standpoint, Sheila is the movie's biggest casualty. She has no autonomy—is constantly passed around by the men, who lie to, abuse, and use her for sex.

The rules—of the Romance format—are detrimental in other ways. Ash's overprotection by the script, for example, lessens the tension. While the first man thrown into the pit is utterly destroyed, Ash is only punched in the nose. Technology is there to even the odds, too. Ash can make explosives and war machines. Some of these advantages are plausible. Others are not: a robotic hand that for all accounts shouldn't work, and unlimited ammo (especially during the end scene).

Ash's endless resources illustrate your typical hero. It's the discrepancy between them that propels him into Byronic territory.  Hopelessly self-absorbed, and buoyed by ropes and pyrotechnics to deify himself, Ash reinforces the worst qualities of privilege. His myriad tools are a boon—granted by the writers for Ash (and his fans) to enjoy. He's selected for the role precisely because he's a man; because he's a man, others—though especially women—are conscripted to appease his ego.

This bias hasn't gone anywhere. For men, Ash is the promise of reward, a vehicle to drive around inside. He's the central character, worshipped precisely because he's stupid (for all his supposed wit, he can't recite "Clatu Verta Nicto" from memory). He's also the Romantic symbol of manliness, a Yankee at King Arthur's Court. His hyperbolic qualities—the superhuman strength, agility and endurance—are tempered by copious shortcomings, themselves easy to mock. By mocking Ash, the viewer can feel superior over someone "greater" than themselves.

The feeling is also one of comradery—of relating to a man who, despite his faults, the jesters aspire to be. In the court of such a man, clowning becomes a form of worship, a fantasy of empowerment and assimilation. This assimilation may not pertain to Ash, himself, but his many luxuries. He's invincible, by all accounts impervious to the mayhem inflicted upon him. And he's adorned with all manner of wealth and pleasure: women, food, and self-fulfillment. He's the story's center, its quester no matter how inept. He saves the day, gets the girl(s), and becomes king. And yet, it's largely in his head—a head full of idiotic nonsense. 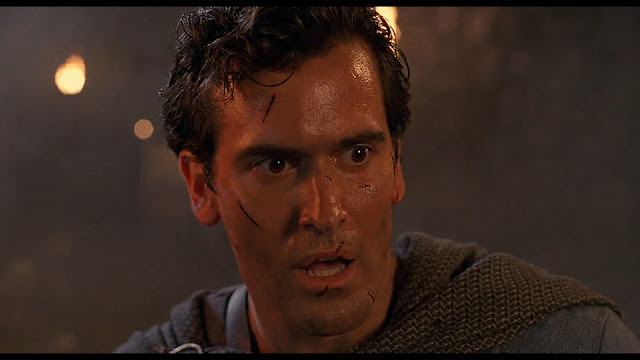 There's a deeper threat posed by the army of the dead. More than a hurdle for Ash to vault, their bones presage doom: Ash and the skeleton king are one in the same, with the former, livelier version one step away from becoming a tyrant on the same, well-trod path. Any attempt by Raimi to highlight this would pay dividends. Instead, its squandered for an opportunity to play jester. The king remains. The court remains. The conflict remains. And Ash is none the wiser. For him, there's no connection between himself and the skeleton king at all.

By refusing to punish Ash, Army of Darkness rewards the idiotic hero. Ash is simultaneously mocked and adored by his "subjects" (the fans). Amongst them, his sexist behavior can be delivered with impunity. Impunity is the apex of privilege. I say this in regards to consumers whose Ash-worship is perpetually reinforced by spiritual successors (see: Doom, a franchise inspired by Evil Dead 2 in particular, and Duke Nuke 'Em 3D). This kind of escapism reinforces sexist views conveyed elsewhere—by impressionable young men who grow into "kings," courted and controlled by their own power trip.

That's ultimately what Raimi offers. He certainly doesn't use the material to critique Ash's misogyny. Instead, he's helped perpetuate it.