Gothic themes in The Vanishing / Spoorloos (1988)

The Vanishing / Spoorloos (1988) has a cheerful appearance, but a dark feel. A chilling tale of tragic love, it concludes in the most horrifying of ways. And, like many Gothic tales, a strange element of fun lingers amid the hellish torment. It has all the ingredients of mystery and revenge: a boyfriend and his lover, wronged by a perfidious killer. But it lacks the mediaeval imagery and immediate fanfare of American outings (Seven, Silence of the Lambs, etc). Instead, it's more laid back—a vacation gone awry.

My blog is about horror, but also sex, metal and videogames; this article explores some of those idea in The Vanishing. For more content like this, check out the blog entire! 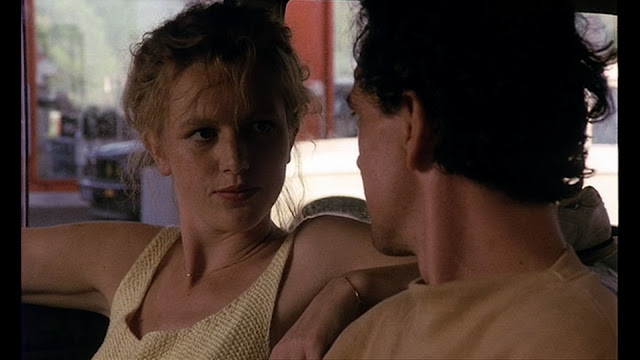 A Dutch couple, Saskia and Rex, are traveling in France. While on the road, Saskia tells Rex of a dream—her, trapped inside a golden egg surrounded by darkness. Her egg must touch another egg for the darkness to end. Then, the two eggs can meld, sharing oblivion forever. The Vanishing is based off a novel called The Golden Egg (1984; written by Tim Krabbé, also The Vanishing's screenwriter).
If Saskia's dream is hard to picture, the next scene illustrates it for us. Saskia and Rex enter a tunnel. Their car runs out of gas. They're stuck, and in danger (the car has no emergency light). They argue heatedly until Rex becomes frustrated. He goes to find gas, leaving Saskia by herself. She's gone when he returns. Rex drives through the darkness, looking for her. He finds her at the end of the tunnel, standing in a golden bubble.

This omen outlines the film's core struggle. A vague summary of what's to come, it highlights the danger, but also obscures it. We're warned, but not entirely sure what to look for.

Not for long. Following the tunnel scene, we're shown a man in a car by himself. He's tall, burly and bearded. He's also squeezing his arm (unbroken) into a plaster cast. There's no evil music, but the imagery doesn't lie: He's the kidnapper, and his sights are on Saskia. The movie doesn't disguise what's about to occur. It does, however, tell things out of joint, and in a playful, voyeuristic manner. It keeps things engaging because it doesn't jump to what we expect. This is the premise of the film, and it works beautifully.

The man's name is Raymond Lemorne and he's a sociopath (we're told this, later). No sooner does Raymond appear than Saskia vanishes. Before she does, one last scene with her and Rex. The pair arrive at a gas station. They exit their car and lie in the grass, where Saskia asks Rex to make a promise: Never abandon her again. He swears it, and solemnly. Saskia leaves for a second. This second stretches into minutes. She does not return to the car. Like last time, Rex searches for her. Alas, she is gone. Is she waiting for him in the darkness?

Next we're shown Bois Vieux, an old, stone homestead. Raymond is there with his family. His daughter opens a table drawer and screams at several spiders; her scream echoes. The son, husband and wife all scream too, but one at a time, listening to the echoes. They simper like fools. The scene seems pointless until Raymond innocently asks the gardener if there'd been any screams. In a quiet instant, the scene's true purpose becomes clear. 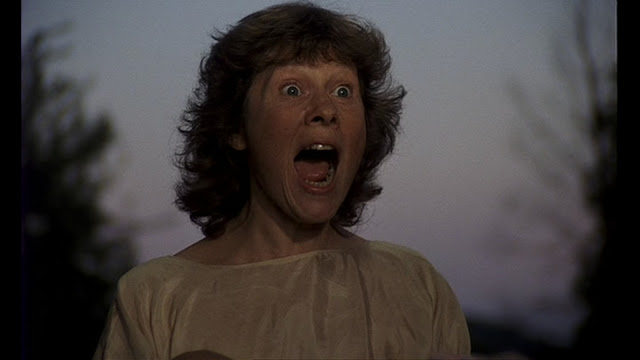 We're continually left to observe Raymond's habits. He's always alone, practicing for a some kind of event. He doesn't say what it is, and prepares as blandly as anyone could. He's not a killer dressed in black; he's painfully ordinary in appearance. I know he's the killer because the movie shows him eying Saskia, but it hides so much more. All I can do is watch. There's no dark music, no sneering at the camera. Raymond simply goes about his business, aloof to everyone and everything.

Raymond doses himself with chloroform, timing himself with a stopwatch; he opens a car door for an invisible woman, practicing the maneuver tirelessly. His wife and daughter think he's having an affair, but he lies to them. It works, and he can pursue his true motives unobserved. Except by us of course. While he's clearly up to no good, his veiled mischief unfolds with all the pretense of a child. It only makes the reality more impactful when it finally arrives.

Three years pass. We see Rex, putting up missing posters for Saskia. Raymond walks past him with another man. They gossip about Rex. He is a celebrity of sorts, having borrowed hundreds of thousands of francs to pay for televised events. He's driven—to find Saskia no matter what. We soon learn that Raymond has been torturing Rex with anonymous postcards, hinting Saskia's whereabouts. The kidnapper is impressed by the lover's tenacity. 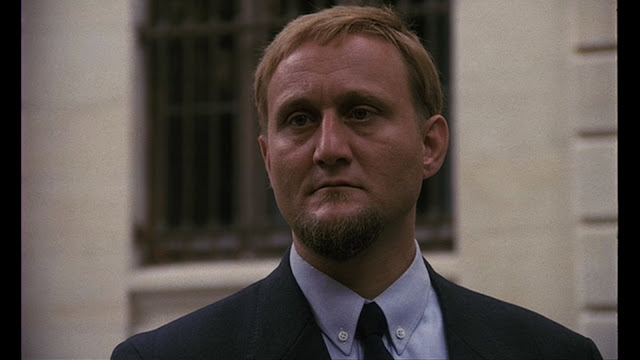 I say "kidnapper" because "killer" would go against the movie's biggest tease: What happened to Saskia? We can guess, but we're denied the event itself. We don't see her die; we don't even see her taken (not at first). She simply vanishes, leaving us to wonder at why, where and how. Yes, we're shown more than Rex, but the tension continues to mount. Raymond knows more than we do and always will; unlike John Doe or Hannibal Lecter, he keeps mum about his victims' fates.

Rex is trapped. He regularly has nightmares, calling out Saskia's name. He has a female friend, but their relationship is uncertain, strained. He cannot love her because he loves Saskia and cannot move on. His life is singular in it's purpose: find Saskia. He soon gets his chance, but he'll be doing it alone. The woman leaves him. This is not a movie of pursuit in the conventional sense. The hero doesn't doggedly pursue the villain or care about revenge; he's obsessed with the truth.

The truth hides behind a black veil. This does more than obscure; it promotes danger for those who want to cross it. When Raymond confronts Rex, he offers him such a choice. Kill him and remain in the dark about Saskia; or come with him, cross the veil, and learn the truth. A main theme, crossing over is an obsession for both men. Raymond leapt off a balcony as a boy and broke his arm. Like Mephistopheles, he uses the same lesson to tempt Rex with forbidden power and knowledge.

The black veil is a popular device in Gothic tales. The direness of the hidden object is no secret. A sense of yearning—to pull the fabric aside—climbs nonetheless. Yet, doing so is perilous. This drama lies at the heart of many a Gothic tale, and The Vanishing ranks among the best. It makes me care—if not about Rex, then about Saskia and his drive to know what happened to her. It's foolish, but contagious.

A series of flashbacks unfold like origami. Raymond fails numerous times. Enter Saskia, the perfect victim. The kidnapping is brutal, raw and over in moments. But it denies me, the viewer, any knowledge regarding Saskia's true fate. It makes me uncomfortable, but also curious. The black veil thickens. By the movie's finale, it's black as pitch. 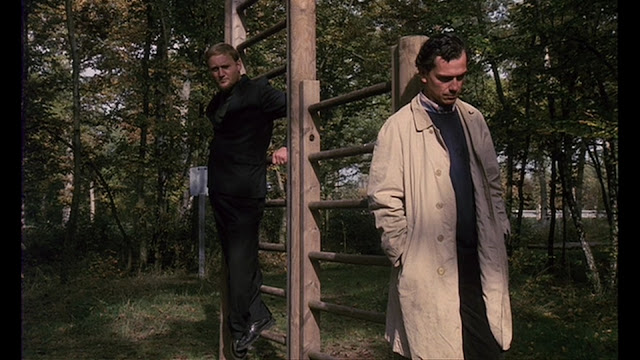 Raymond takes Rex to Bois Vieux, where Saskia is. On the road, Rex asks questions only to be ignored. Raymond merely offers him a sleeping potion. "Drink it and know the truth," he says with a straight face. A stormy sky betrays his darker motives; it begins to rain. Rex isn't a total fool, but his defenses are wearing thin. He initially refuses, splashing Raymond's face. Raymond gives him five minutes to change his mind. Eventually he does.

By this point, my curiosity felt utterly morbid. The veil is a clearly trap; I still wanted Rex to drink, to end the tension. He kneels in the grass, numb to the thunder around him. He's peering into the void, recalling the scene from earlier when Raymond jumped off the balcony and broke his arm. According to Raymond, the act was liberating. Rex adopts a similar mindset and refills the cup. He drinks. Then, he sits in the passenger seat like Charon's canoe, waiting to be ferried to Hell.

Raymond's leap of faith was ostensibly liberating. Rex is unquestionably paralyzed. He wakes in total darkness, lying on his back. He fumbles for his lighter. The meager light illuminates wooden boards. Fresh soil seeps through the cracks. A coffin. He's been buried alive!

A shocking conclusion, to be sure, but its impactful comes from horror, not surprise. The danger from Rex's Faustian bargain is obvious; the Promethean outcome is not. There's no armor to shield Rex (or us) from his burial. He cries out in fear. Just as quickly, though, he accepts his fate: If Saskia is dead, then so is he. He seems insane, but his quest is futile, too. There's no ghost to greet him; Saskia's "funeral" is never shown, leaving the veil partially closed forever. 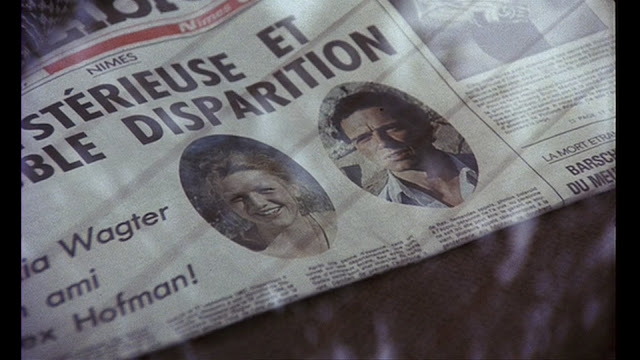 The film extends its pathos through concealment. Raymond looks cheerful, but cannot feel; he's drawn to Rex like a vampire to fresh blood. Rex appears dead, but his ghoulish vitality makes him more alive than Raymond; and Saskia is veiled, but everywhere. The story is also a Romance. At Bois Vieux, a pair of trees blossom, watered unwittingly by Raymond's wife. These might be a trophy for Raymond; they also signify Rex' bond to Saskia, which Raymond couldn't break.

The movie leaves us with Raymond. Always in control, he looks bored, a slave to his own vices and curiosity. So while his victory seems clear, nothing is certain in Gothic stories. Only the urge. He knows we want to look. Though academic, the fatal knowledge scratches an incessant, burning itch. The movie fans it like a flame. We look on, left to experience it all.