August 30, 2019
As part of my ongoing Q & A series on "Alien: Ore" (2019), this two-part interview is with Vancouver FX, the company involved with the practical special effects, on-set. This is part one of the interview.

Nick: My name is Nicholas van der Waard. I have my MA in English Studies: the Gothic, and run a movie blog centered on Gothic horror, Nick’s Movie Insights. Joining me for this interview is founder of Vancouver FX Dallas Harvey, who did the practical special effects in "Alien: Ore." Apart from this movie, he has also created practical makeup effects, custom props and puppets for Season 2 of FOX's The Exorcist and many other horror/sci-fi film productions.

(to the Vancouver FX crew): How long has Vancouver FX been around? Have you always been involved in horror movies, in particular?

Dallas: I founded Vancouver FX in 2011 after deciding to take the leap from the CG design world and dive into practical effects for TV and film. Now [Vancouver FX] offers both digital and practical special effects character creation, sculpture and specialty props services. When the company started we mainly focused on horror and sci-fi films and definitely built on a solid foundation on blood, guts and zombies! Over the years we have expanded to create high-concept horror, sci-fi, fantasy and photo realism when the production requires.


Nick: How many people are part of the FX team? Were all of them involved on "Alien: Ore"? 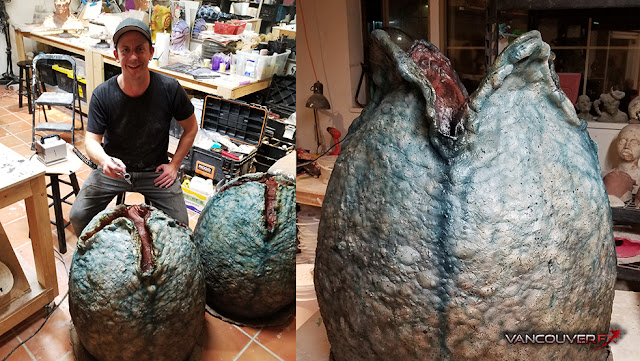 
Nick: Apart from your own company, are there other effects companies that you feel do especially good work?

Dallas: There are so many companies out there doing great work and many talented artists behind them; it's really hard to choose. A few favorites are USA-based companies KNB, Studio ADI and Legacy Effects—they do amazing work, as well as Australia's Odd Studio... and who can forget WETA Workshop.

Dallas: For Alien franchise films one hundred-percent I am Team Scott. However, Cameron is one of my top favorite directors of all time. His innovation and advancements in the field of special effects film making technology makes him a legend.  [editor's note: I think Cameron is especially impressive considering what he was able to do with a smaller budget. Nary a dollar wasted, and better spent than many of the big-budget movies from yesteryear.]

Nick: What was your first Alien experience? Can you describe the first time you saw an Alien movie, and which one it was?
Dallas: The first time I saw the original Alien (1979) was on an old VHS tape a friend lent me as an early teen. When I saw the Ovomorph egg chamber I'll never forget how detailed and creepy the eggs were. The set, prop design and makeup effects have always stood out—especially in the Engineer Pilot, Chestburster puppet and egg sequences. I was already into H. R. Giger art before I saw it [on-screen] and his designs have always been a strong influence on my art style. The way he designs organic and robotic anatomy to make it functional has always been fascinating to me. 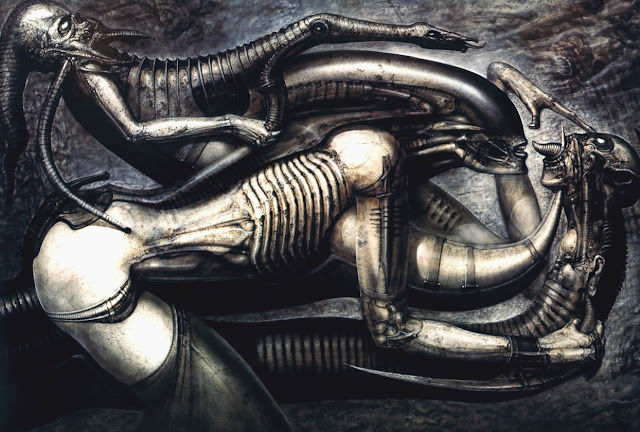 Nick:  Is it typical for someone to "fall in love" with movie magic by watching monster movies? [editor's note: For me, I saw The Monster Squad (1987) and have loved monsters, even since.]

Dallas: I know many effects artists who would say they fell in love with a certain creature movie that sparked their curiosity to enter the special effects field. For me those movies were Jim Henson's The Dark Crystal (1982), Heavy Metal (1981) and Hellraiser (1987) and Hellbound: Hellraiser II (1988).


Nick: Are there certain movies in the franchise that you enjoy purely for their special effects?

Dallas: The first two Alien films I can watch again and again for their iconic special effects and design. I am also a fan of the more recent Prometheus (2012) designs. But nothing beats the original effects from the 1979 film.


Nick: Do you think that special effects are more than just icing on a cake, that they can tell a story all by themselves?

Dallas: Special effects can set the tone and build an original feel for a film or take back seat to a story, depending on the vision of the production team. The most recent Mad Max: Fury Road (2015) does a great job of bringing the in-camera special effects to the forefront with so many original character personalities. [This is] helped by special effects makeup and props, [but] even the stunt vehicles seem to have their own attitude and character style—one of the best special effects action films in recent years! 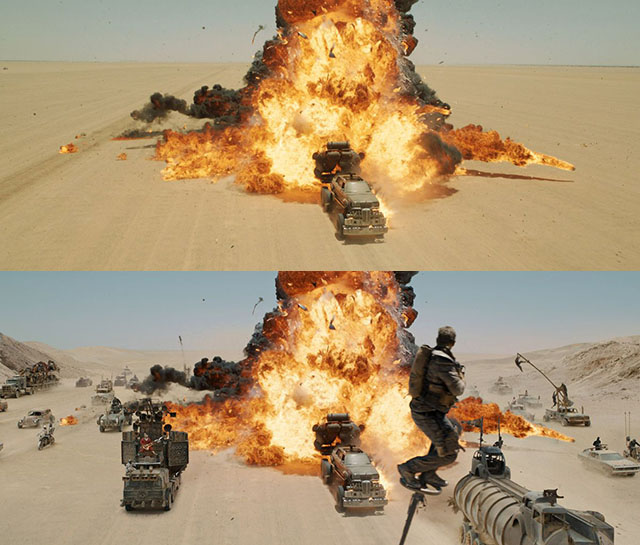 The excellent use of digital effects in Mad Max: Fury Road (2015) is seamless and effective (image from Peta Pixel).

Nick: One of my favorite movies about special effects is The Wizard of Speed and Time (1988). It's not a documentary, per se, but still manages to shed a lot of light on special effects and how they're made. The stop-motion is pretty badass.

Are there any examples of movies (documentaries or otherwise) like that, for you; or, are there are examples of "must-see" special effects movies for up-and-comers in the special effects industry—the kind that might be shown in your workshops, that your crew watches on a regular basis?

Dallas: Ray Harryhausen: Special Effects Titan (2011) is a must-watch documentary for anyone wanting to learn about character and creature creation. It is a wonderful film about one of the most talented special effects artists and stop-motion animators to ever live. A true legend, I highly recommend watching [Ray's work]. In the studio, we also watch a lot of behind-the-scenes extras when a new film with special effects comes out. Getting to see the on-set and in studio workings of a production being built is a great way for up-and-coming special effects artists to learn about the craft.


Nick: In general, what are you favorite movie monsters?

Dallas: I'm a huge fan of director Guillermo Del Toro and his legendary monster creations. The Pale Man and the Fawn from Pan's Labyrinth (2006)—[both]played by actor Doug Jones—are two of my very favorites. The designs of Del Toro's creatures in his two Hellboy (2004, 2008) movies are also very creative and I enjoy that style of character creation very much. Other favorites are Chris Walas' multi-stage designs and makeup effects for The Fly (1986). Rob Bottin's effects work on The Thing (1982) is also outstanding and has influenced my art style greatly.

Walas and his team bring Cronenberg's "Space Bug" to life (image from Horrormade).

Nick: Somethings bad effects can be a good thing. Are there any instances of really bad effects that you love to watch, precisely because they're so bad?

Dallas: I love campy old school bad effects. On one hand, it shows what to never do if you are trying to achieve realism. And on the other side, I find it highly entertaining and great fun. Movies like Peter Jackson’s Braindead (aka Dead Alive, 1992) and The Evil Dead franchise are great examples of bad effects that are still a good time. They say you can never have enough blood!


Nick: The word "bad" is pretty subjective. In your opinion, what constitutes bad special effects?

Dallas: In my opinion, bad effects happen when the production creates them without thinking enough about (or putting budget towards) the creature design, environment and planning customized lighting the effect-in-question needs to be realized. It doesn't matter whether [the effect is] practical in-camera, or digital—as long as the effect looks like it is in the scene and interacts properly when required.

Nick: What does the Alien franchise need moving forward to avoid falling into the "bad effects" category?

Dallas: As long as the Alien franchise moves forward with that in mind and doesn't just hide everything in total darkness, I have hope. [editor's note: Of course, the use of darkness isn't simply to hide special effects; often, darkness can "dress" a set or effect to make it affect the audience in a particular manner. Personally, I would say the latter-day Alien movies—Prometheus and Alien: Covenant (2017)—have been, at times, too brightly lit! The worst example of an Alien movie being too dark, however, would have to be Aliens vs. Predator: Requiem (2007). It's so dark, the viewer can't see any of the special effects or monster costumes!


The Current State of Special Effects


Nick: In the digital age, the norm seems to be CGI. Are you worried that practical effects will be replaced by digital more and more, until digital completely replaces practical as was the case with ADI's effects work for The Thing (2011)?

Dallas: People ask me this question all the time, as it's becoming a bigger discussion in our design community. I think there will always be a place for practical effects. Things are definitely moving in the CGI direction and there are many things practical effects just can't do. I always say special effects are just another tool box, one side practical and one digital. Just pick the tool that works for the effect and who cares what it's called! 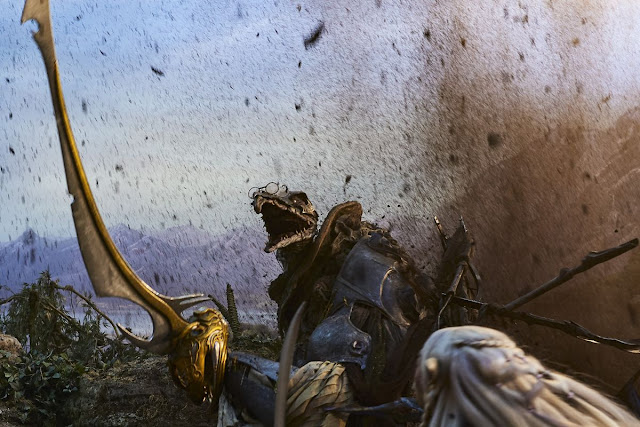 The upcoming The Dark Crystal: Age of Resistance (2019) uses practically-driven, classic puppetry enhanced by CGI (image from The Verge).

Nick: I think some of the best results occur when they are combined. T2 (1991) did it with digital, but I still love Forbidden Planet (1956) and how it combined practical effects with hand-drawn analog effects. On that note, Gothic stories often involve the animation of ghastly artworks, like those from H. R. Giger or Stephen Gammell (the artist for the infamous Scary Stories to Tell in the Dark [1981-1991] series). This concept goes back even further to 17th century Neo-Gothic novels, where paintings literally "come alive" in various ways. If a painting came alive, it might be difficult to give it an "oil-in-motion" appearance without some digital assistance. The killer painting from It (2017) leaps to mind, or the Balrog from Fellowship of the Ring (2001), which, itself, was been based off old paintings from earlier fantasy artists.

Do you think most monsters can, or should, be created exclusively with practical effects; or, is there ever a point when a monster should be totally digital, for a kind of "painterly look?"

Dallas: Sometimes it's best to integrate both technologies to achieve the optimal effect. Many films are taking this approach nowadays and I think practical effects will still be around for a long time.