June 04, 2019
This is part one of a two-part article that analyzes Brightburn (2019) Gothically. It outlines the movie and its Gothic content. Part two examines the bad parenting angle. Spoilers!

Before I continue, I wish to say that I enjoyed Brightburn. Like its protagonist, it's small and quick. Also like him, it doesn't say much outside of its basic premise. As a horror movie, it has some really good moments, but these are lost in the mire. The movie has plenty of ideas. There's just not enough time to explore them at a deeper level. Instead, they race past, too quick to see save as blurry outlines that promise something more. 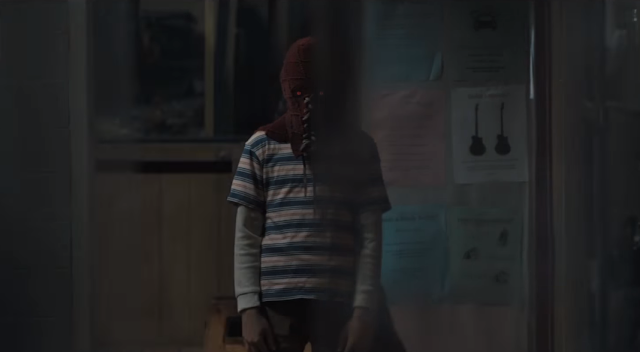 The best monster mask in a long time.

That being said, there's a lot Gothic going on, here (albeit at a superficial level). In the Gothic, symbols are ambiguous. Often, they concern ordinary places, invaded by a sinister, alien presence; there's an ambiguity in terms of what is what, and where it is according to what it is. Beset by evil, Brightburn is like any other small town. Grover's Mill, Miller's Grove, Haddonfield—these places are quaint, provincial. And if they have a boogeyman, the name of the lair is synonymous for the monster, inside.

In Brightburn, I actually thought "Brightburn" was the name of the hero; it is not, but the hero, Brandon, identifies with it anyways—perhaps more strongly than the normal, earthly residents do. Using his initials (which happen to be the same as Brightburn's), he marks the small town like a predator does its hunting grounds. Brightburn is Brandon's home—at least, it is while he grows up inside it. As he gets older, though, he sets his sights on a brave new world: 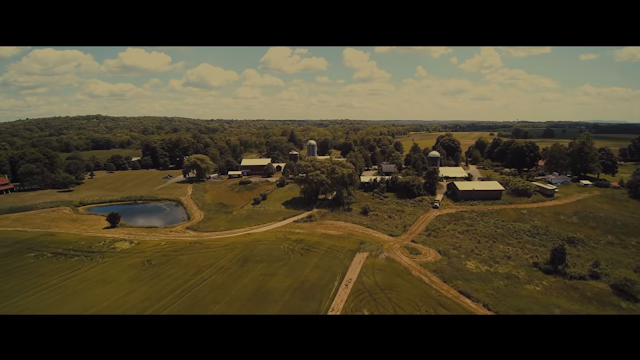 "As when a prowling Wolfe,
Whom hunger drives to seek new haunt for prey,
Watching where Shepherds pen thir Flocks at eeve
In hurdl’d Cotes amid the field secure,
Leaps o’re the fence with ease into the Fould..." —Milton, Paradise Lost

Brandon's parents, especially his father, are not happy about this, and struggle to contain him. Brandon's father, Mr. Breyer, is actually his stepfather, a man ill-equipped to handle what Brandon actually is. Like those cheap, blue candies he gives to Brandon as an infant, Mr. Breyer's approach to parenting is woefully inadequate. It's not long before he's ready to throw in the towel: "He's not our child; he's something we found in the woods!" he shouts, fed-up.

I'd say the plot thickens, but we already knew this going in. Plot-wise, the woods are just a forest; Gothically, they're Numinous, an overwhelming space on par with Dante's dark forest, Area X, or the Twilight Zone. How foolish of the Breyer's to take something from them, without stopping to think about where it came from. An opening scene reveals this to have largely been Mrs. Breyer's idea. We learn Mr. Breyer cannot say no, is left caring for a child he secretly fears.

The premise—that their lop-sided desire to have a child trumps xenophobic caution—is serviceable. It's also eclipsed by a string of glowing baby photos. Ten years pass in seconds; we see tween Brandon hanging around the barn. One night, the barn calls to him; or rather, from inside the barn an evil voice whispers to Brandon, heralded by ominous red lights. It is quite literally a "red room," a symbolic import from Charlotte Bronte's Jane Eyre (1847). Brandon's bildungsroman  is centered around constantly returning to this place. 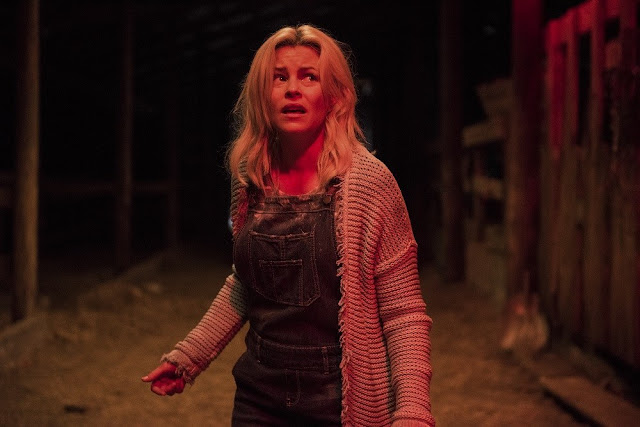 Red means "go," in this movie.

Watching this movie, I constantly thought of Frankenstein (1818), Mary Shelley's Gothic novel. Partly a creation story, the Creature is proof that Victor, its maker, is monstrous; his imperfections are reflected in a giant, super-sized version. Superman (1978) is different in that Superman is born, not made. That movie reveals a lot. The hero's parents, homeworld, and future nemesis are all shown in the opening scene; Brightburn  never shows any of these. It begs the question, though: If the Breyer's are his stepparents, then who are his real parents? Brightburn  didn't have to answer this, but it should have asked a little harder.

One clue is the wasp lesson (similar to Laurie's lesson, in Halloween [1978], this scene is quick, but important to understanding how the movie operates). Brood parasites are aggressive, Brandon explains—so aggressive, in fact, that they've lost the ability to rear their own young. Instead, they force their eggs into the hives of other wasp species, that the indigenous population might raise a hostile derelict. A novel enough idea (and not the first time a real-world wasp inspired the creation of an alien monster). I still found Brandon's behavior curious. I couldn't help but think that he was responding to the alien "pram" as a machine would: triggered by radio(?) signals that unlock new abilities, as if on a time lock.

This begs another question. Was Brandon made or born? The movie doesn't bother to ask. Instead, its approach is somewhat pedestrian: the slasher sub-genre. Brandon's aunt, for example, blames puberty for her nephew's red flags. Then again, she's human; Brandon isn't. The problem is, I only knew about Brandon's alien status because the movie told me (or showed me briefly through his superpowers). Whatever the approach, without action or words there's little to convey Brandon as feeling alien. Take away his superpowers and he's disappointingly human. 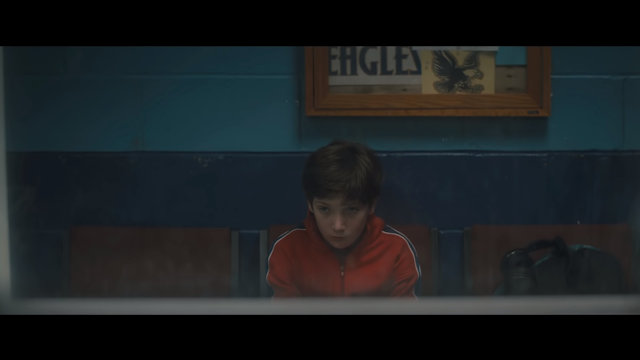 Of course, horror movies are symbolic, or can be. In this case, though, I felt more inclined to take a literal approach: Brandon literally being an alien from outer space. Again, though, little about him felt alien. His superpowers, his serial killer tendencies, his stalker behavior—all felt Gothic, but in a run-of-the-mill, human sense. I needed some clue or suggestion as to what he actually was outside of the stock tropes.

At the very least, I craved time to suspect Brandon's alien qualities. The best Gothic stories tease the hidden, which hide in plain sight; Brandon lies in plain sight, but is seldom teased out as being alien. Instead, he is teased by the townsfolk for being simply being different, and in very straightforward ways: He's stronger and faster than them, is "a total creep." If alien is X, and X lies beyond all the everyday adjectives, then the movie never gets anywhere near X. In short, it's not uncanny enough to really work the horror angles beyond Brandon simply being an evil, orphaned superman.

To this, Brandon's emotions are yet another mask (speaking of masks, his costume mask is totally awesome). It would be a mistake to say that Brandon feels nothing at all; he lacks remorse, but the void in its place is full of tremendous anger and confusion. An alien in a small town, he is the inevitable outcast. Presented with an opportunity to act normally, he simply doesn't. Whether hit or hit-on, he responds, but his sense of delivery is always skewed.

Here, the pacing suffers from attempting too much. There's no time for Brandon's rejection, for example. Following the girl's sweet comment to him, in the classroom, he stalks her and immediately loses her affection (understandably so). Whilst a "dark love" watching from the windowsill is conventionally Gothic, some additional pacing would've drawn out the thrill of it all. Instead, there's just not enough time to really do much of anything. Soon, the girl is forgotten, given little to do but cry in bed as Brandon moves on. 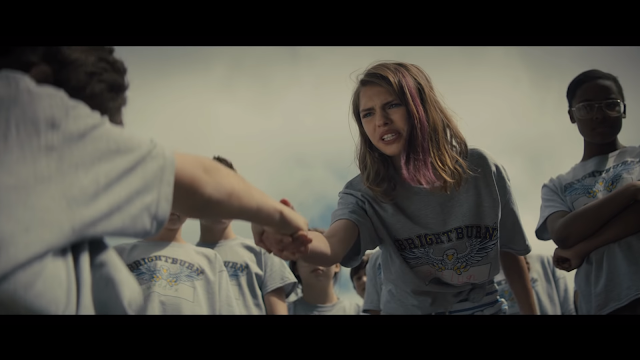 This scene gives a whole knew meaning to the word "crush."

Brandon is also shrewd. Recognizing the image of the bullied victim, he uses it to lie to his parents. Why, though? Despite all that's going on with himself, Brandon doesn't want anything to happen to his folks. He's happy with them, and we can understand why. They laugh and play games, together. It's positively pastoral. Puberty doesn't care; those pesky chemicals get Brandon all confused. For him, this process amounts to commands from a nearby spaceship, and it happens at the drop of a hat. Toss out a sub-plot (or two) and the need for the ship could've been discarded, the story much less rushed.

Brandon isn't foolish. He knows something is off. He's also not in control; the ship is, and commands a body bred (or built) for conquest. Steered along by the hidden device, Brandon's adolescent, sexual whims elide with extraterrestrial, violent tendencies. For all intents and purposes, the intrusive thoughts are not his own. Regarding Brandon's childhood—his time spent on earth—the purpose of these thoughts is alien, even to him. 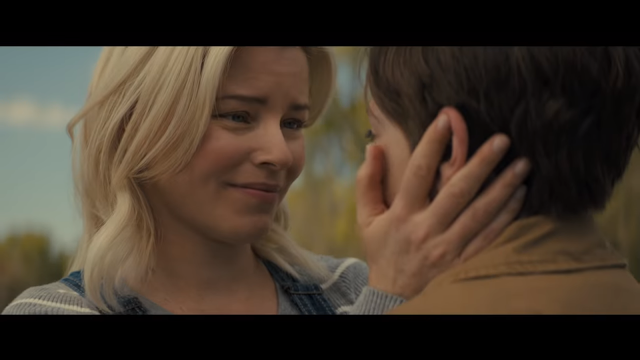 Plot twist: Mother and son are both are capable of murder and lies.


When Brandon begins to kill, he is being himself in ways he cannot control or understand. Furthermore, these tendencies bleed into his everyday life. His sexual attraction become murderous, incensed by rejection from those around him who sense his dark aura. He will kill, of that there's no doubt. While he's less kind to his schoolyard comrades, he still lies to protect his parents. Brandon's desire to protect them eventually wears off. This isn't the tragic part; the deciding factor is. The moment his parents betray him by duplicitiously trying to euthanize him, Brandon embraces the alien within.