Disclaimer: This review goes into heavy spoilers. I recommend watching the film if you haven't already and then reading my review. 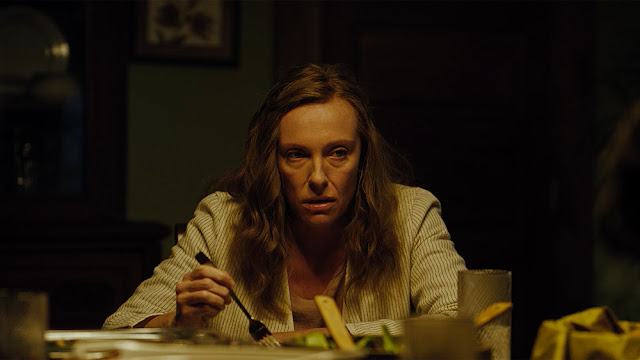 Tolstoy once wrote, "every unhappy family is unhappy in its own way." Hereditary's cast is one such clan, introduced at a funeral. Ellen, the dear departed, is eulogized by her awkward, terse daughter, Annie Graham. Annie has a daughter, Charlie, and a son, Peter. Annie's husband is the level-headed, inoffensive Steve. Ellen is dead, but not quite gone. We see her in the Graham home, and on the land, itself. She's present in miniatures Annie, a professional artist, fashions: the home, the people inside it from different periods in Annie's life. Some contain Ellen, and hint at past abuse. We learn Ellen doted on Charlie, and bossed Annie around; when Annie thinks she sees Ellen's ghost, she is afraid.

Not long after the funeral, an accident happens. A bird flies into a window and dies. "There is special providence in the fall of a sparrow." Hamlet recognized a guiding hand in things. Hereditary promotes something of a hand, as well: a malign sense of total doom revealed far too late, but teased out in the opening scenes. After class, Charlie severs the bird's head; she soon loses hers, as do Ellen and Annie. I was so engrossed in this movie, I didn't notice the pattern until the end. Instead, it works largely through the power of suggestion. When the horror begins, these moments arrive in ways that subvert the established pattern. There is no survival, no victory for the hero if this movie ever had one.

The smaller omen, of the dead bird, is followed by another. Charlie eats some cake, and suffers an allergic reaction. This is foreshadowed. However, during a frantic ride to the hospital, Peter swerves to avoid a deer, lying dead in the middle of the road. At this exact moment, Charlie has her head hanging out the window, trying to breathe. You don't even see what happens. There's a snapshot of something hitting something else, followed by an awful crunch (the sound effects, here, are impeccable). Cut to Peter. He's stunned, frozen in terror. I wanted to look, but the camera lingers on him and his sweaty face. We suspect his sister is dead, so why doesn't he respond to let us know?

Aster deliberately hides the horror of the scene. After several agonizing minutes, Peter drives home. We're shown nothing of the sister. Instead, the brother gets out and goes inside. He lies in bed; we hear Annie scream. Now Aster cuts to Charlie's severed, bloody head, smashed and lying on the asphalt, covered in ants. Now we know why Peter was so stricken. The shock of the severed head is partly due to whom the head belongs, and what lengths the movie goes to horrify. It pulls no punches, reducing its victims to fodder. However, it takes its time, leading up to the fall of the ax. Things are allowed to unsettle, first. There's a history with the living and the dead, a combination of the supernatural and the mentally ill. We'd fed information gradually and in pieces. Charlie was Ellen's favorite. Both are dead. Things do not bode well for those who remain. 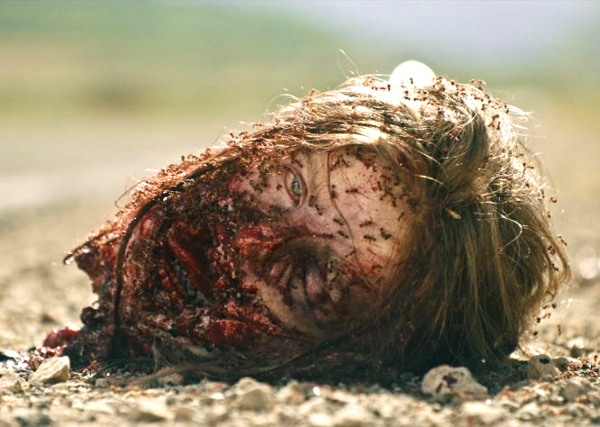 I knew nothing about Hereditary before watching it, including the rating. For some reason, I thought it might be PG-13. After hearing Charlie snuff it, I very quickly changed my mind. The tone of this movie is grim, through and through (the music is excellent). It's not simply the level of gore, but how Aster teases out scenes of impending gore. The build-up is competent, the payoff equally so. Aster's witches are not black and white. Instead, they are distant, spurious, or dead. They betray and kill with gross indifference, but lurk, cheat and lie. The family feels hapless, like victims blind to their fate. It feels awful, but also gradual. The excellent drama is superseded by inevitable torment and brutal murder. When they are killed, it's almost by accident, the cadaver's tossed aside or arranged about the room in a bizarre, happy ritual. Headless bodies float hilariously by the end. They're just play-things for the demon.

Terror proceeds horror, amid a traumatized family's perennial drama (the acting is uniformly stellar). Illness overlaps with supernatural affairs. We doubt the veracity of the female prophet, Annie. Those around her think her mad. Hereditary moves along familiar tracks before jumping them, its diversions computing in retrospect. It doesn't feel cheap; it feels brutal, unfortunate, and strangely fun, all at the same time. Misfortune and obscurity beckon outrageous delight in the Gothic exploration of nightmares.

"Is it more or less tragic because they didn't have a choice?" the professor asks, concerning Sophocles' rendition of the Greek demigod, Heracles. Again, this is parallel to the troubles on display in front of us. The Greek hero is doomed, no matter how strong he seems. Annie is presented as such, durable and doubted, with a chance to overcome. Then, the movie pulls the rug out from under us. After the bloody business concludes, we realize Ellen only loved Charlie. The rest are simply fodder for an opportunistic act of revenge. This love is grotesque, however. Charlie's head is eventually mounted on a gilded mannequin. Ellen and Annie are beheaded, and each "kneels" before the perverse idol. It seems horrifying to us, but the placement of the beloved girl's head is part of a larger, sinister honor. Witches kill two birds with one stone, but also see things a little differently than the victim(s). They profit through misery. They delight in the profane. 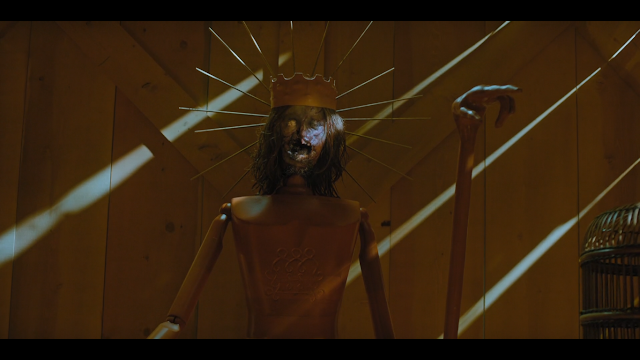 Aster loves doubles. Situations and symbols oscillate across a cat's cradle of parallel ties. Consider the bird. It hits the window and dies; Charlie cuts off the head and carries it around. Later, she is "led" towards her ghostly grandmother, outdoors. Later, in her sketchbook, there is a bird with a crown, which Steve, the bereaved father, looks at, nonplussed. At the end of the movie, "Charlie" wears a crown, as does the "brother." He is longer himself, but the demon; she, the unwitting bird, idolized postmortem through a ritual associated with her family's darker secrets.

These secrets eke out. When Peter stares balefully into a pane of glass, he sees his reflection smirk back. He loses control, adopting his late sister's look and manner. The demon invades through proxy. It controls Annie and Peter by using Charlie's spirit to invade them. The ritual is and isn't what it seems; it is not the spirit of Charlie, but Charlie as controlled by someone else, and under false pretenses—all of this prescribed through a sheet of cryptic symbols provided by someone who not who they say they are. Yet, this someone is not a total stranger. They are the secret friend of the family Ellen used to lord over.

In other words, the demon never quite shows itself, but is never fully hidden. The horror lies in front of us in ways that catch us off guard. We see Annie propped up as the flawed heroine, only to become a tragic victim. Shortly before she dies, she attacks her son, banging her head off the ceiling with a similar level of intensity as Reagan from The Exorcist (1973) or the spectres from Jacob's Ladder (1990). Is there room for tragedy when all one can do is stare in horror? Tragedy remains ambivalent, much of it being framed a dream, or somnambulation. Earlier on, Annie is asleep and doing these things; then, she's "awake" and doing them. The severity of the possession progresses. Moreover, it grows increasingly worse through attenuating ambiguity. It is not a dream, we learn, nor a mental illness: the mother is cutting off her own head (the look on her face is priceless). There are naked, creepy old people in the attic. Worse, they're your relatives, or cultist friends of theirs bent on carrying out an opportunistic ritual(!). It's deliciously Gothic.

The use of sound design is paramount, here, as well. When Annie cuts through her neck with a sharpened chain, we hear it before we see it. Charlie's ghost is preceded by her tell-tale "click." Is it her, or the demon mimicking her? These sounds are ambiguous and displaced, a sonic wendigo. The characters are skeptical, given small amounts of truth to mislead them (and us) into thinking everything is normal, i.e., the byproduct of mental illness as tolerated and fostered. A shadow of doubt remains. The editing likewise reinforces the uncanny situation: jump cuts that segue from day to night in the blink of an eye; characters that go from sitting in a chair at home to a chair at school, frozen in liminal, hellish tableaux. Things become increasingly grey. Then, at the very end, the knife plunges home. 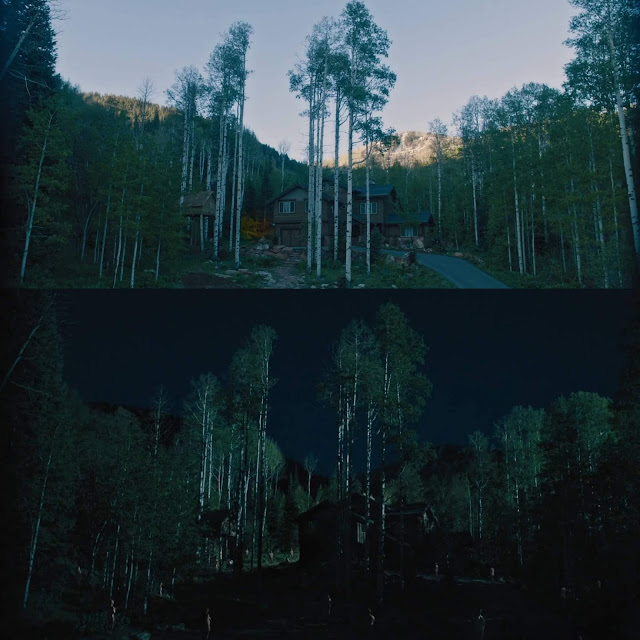 I love how the drama and Gothic affect in Hereditary work in conjunction: the terror (the hidden) unfolds and compounds, heightening the drama; the horror (the shown) annihilates it. We see the heroes become victims. Peter is chased through his own uncanny home by a demonized parent. In the Gothic, such agents either remain themselves, but are possessed; or, they are "copied" symbols, fabricated by some demonic agent to spook its victims into affected motion. The doubles are symbiotic, nightmarish heirlooms, in either case. This relationship is continual, inherited, displaced. It can have other qualities, too, can be exotic, sexual, post-colonial, demonic, etc; the ontological barriers remain blurred through faulty perception and description, manifesting in a house that is both spooky and dark, but also tied to its own past as interpreted by Annie, making the miniatures to begin with. It is a great, recursive machine for the family to lose themselves in, to become lost and confused, slain.

The story is designed to push Peter to the edge and then over it, towards a final, horrifying destination. We, however, remain trapped in a nightmare. There is no waking. We simply stare in horror, caught between the self-contained narrative and those things outside of it the movie responds to. Aster's work is replete with nods to older cinema and classical literature, mutually invested with the home and family as rotten, mad, or besieged. Why not all three?